House Democrats loaded their infrastructure measure with climate change spending, staking out a contrast with the Senate’s bipartisan bill that President Biden has embraced. 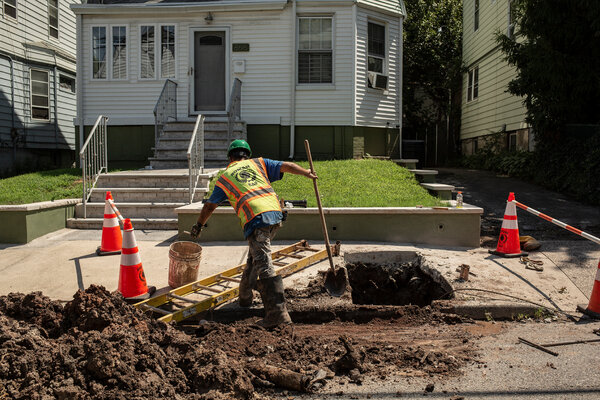 WASHINGTON — The House on Thursday laid down its marker for this month’s infrastructure negotiations, approving a five-year, $715 billion transportation and drinking water bill that would do more to combat climate change than the Senate’s bipartisan measure embraced by President Biden.

Democratic leaders see the bill as a baseline for talks with the Senate aimed at producing the largest investment in infrastructure since Dwight D. Eisenhower began the interstate highway system. The House measure, which would authorize a 50-percent increase over current spending levels, passed by a vote of 221-201, largely along party lines, a break from past infrastructure bills and a mark of how polarized Congress has become.

It would devote $343 billion to roads, bridges and safety. Its $109 billion for transit would increase federal spending by 140 percent. An investment of $168 billion in funds for wastewater and drinking water includes a new program to forgive the unpaid water bills of Americans struggling through the pandemic, and then to help pay bills in the future, much as the government helps pay home heating and air conditioning costs.

But with heat records being set from Arizona to Seattle, House Democrats emphasized the billions that would go toward electric car and truck charging stations, zero-emission transit vehicles and shoring up roads, bridges, tunnels and rail lines to withstand severe weather and rising seas driven by a changing climate. Funding for Amtrak would be tripled, to $32 billion, and high-speed rail planning would be underwritten.

“We have to rebuild in ways that we never even thought about before,” said Representative Peter DeFazio of Oregon, chairman of the House Transportation and Infrastructure Committee, adding, “This is the moment. We have to be bold.”