WASHINGTON — Mark A. Milley never planned to spend his life in the military.

He faced a choice between joining crew-cut cadets at West Point and attending an Ivy League university. As he weighed the decision, his father, a Marine who fought at Iwo Jima in World War II, made clear he did not want his son joining the military, and even enlisted another son to sabotage the young Milley’s West Point visit by getting acquaintances to show him the more miserable parts of the Army college regimen.

Alexander Milley, the father, won the battle — Mark Milley did not go to West Point, but to Princeton, where he grew his hair long and played on the hockey team.

But the elder Milley, who died in 2015, lost the larger war. Something had been planted in his brain, Mark Milley has told friends, that made him believe that he was lucky to be born in America, and duty bound to follow his father’s footsteps. At Princeton, he joined the R.O.T.C.

On Monday, Gen. Mark A. Milley, a four-star Army officer with multiple combat tours during his 39 years of service, will be sworn in as the highest-ranking military officer in the country. It will then be up to General Milley, who easily mixes charming banter and bluntness, to manage what is probably the most consequential professional relationship of his life: becoming the senior military adviser to a mercurial president who has routinely brought the Pentagon into the political fray, to the discomfort of many top Pentagon officials.

At the Pentagon, one narrative about General Milley’s ascent was that he got the top job — over Gen. David L. Goldfein, the Air Force chief of staff who was the choice of Jim Mattis, the defense secretary at the time — because he cozied up to President Trump, massaging their relationship with jokes and friendly chats interspersed with exchanges about how to rein in bloated military costs. 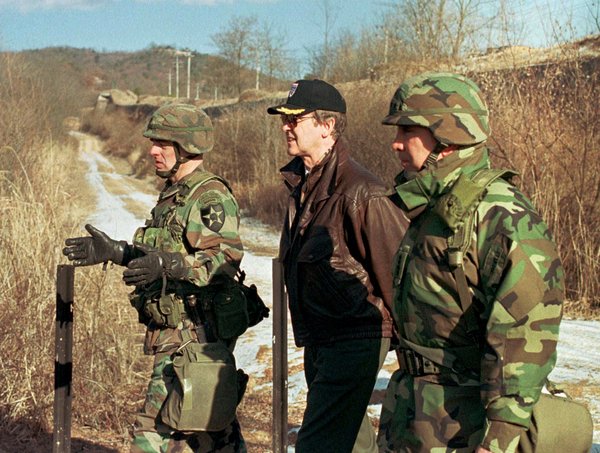 Mr. Trump himself flicked at that during a Medal of Honor presentation last year when he cited conversations with General Milley about the cost of expensive bombs. “I could see in his eyes when I talk about the cost of those bombs,” the president said. “He’s good at throwing them, but he’s also good at pricing them.”

(The president had a point. Back in 2016, when General Milley was Army chief of staff and the service was going through a drawn-out process of trying to find a new pistol, an exasperated General Milley exploded. “Two years to test? At $17 million?” he later scoffed to a think tank audience in Washington. “You give me $17 million on a credit card, and I’ll call Cabela’s tonight.”)

Late last year, Mr. Trump overruled Mr. Mattis (who quit soon afterward over a dispute regarding troops in Syria and several other issues related to the president’s worldview) and announced suddenly — almost a full year before the term of Gen. Joseph F. Dunford Jr. was to expire — that he was appointing General Milley as the next chairman.

General Milley’s friends and people who have worked with him say his ability to get along with Mr. Trump is simply a reflection of the ebullient general’s personality. Unlike General Dunford, who is more reserved, General Milley never met anyone he did not like — at least at first.

He talks. And talks. He is an avid student of history in general and military history in particular. He cites St. Augustine, Thomas Aquinas and Henry David Thoreau in conversation — and do not get him started on the Battle of Kasserine Pass, the World War II debacle in Tunisia when unprepared American troops were outfoxed by German forces. (He does hold a master’s degree in international relations from Columbia University.)

When General Milley talks about war, it is from the point of view of someone who has been under fire multiple times. During the Iraq war, he was a brigade commander and one of a group of hotshot colonels who would all go on to bigger things at the Pentagon: Robert Abrams, now a four-star general and commander of United States Forces Korea; Stephen Lanza, who rose to become a three-star general and commander of I Corps; and James C. McConville, now a four-star and the new Army chief of staff.

During his time in Iraq, Mark A. Milley picked his way through open sewage in Abu Ghraib, took fire from rocket-propelled grenades in Sadr City and gave lip to a higher-ranking American officer clad in tanker boots who dared to question whether Colonel Milley’s brigade, suddenly tasked as a quick-reaction force, could handle Baghdad in the middle of a flaming insurgency. “General, we’re the most mobile force you’ve ever had,” Colonel Milley said, according to people with knowledge of the conversation. “We’ll do just fine in your city.”

As Army chief of staff, General Milley has come under criticism from some in the Special Operations community for his involvement in the investigation into the 2017 ambush in Niger that left four American soldiers dead. He persuaded Patrick M. Shanahan, who was acting defense secretary, to curtail a broader review, and also protected the career of an officer who some blamed for the ambush. General Milley’s backers said he prevented the officer from leading another combat unit.

But General Milley also has an instinct for finding common ground with different types of people. At a conference of senior African military leaders in Arusha, Tanzania, in May of 2016, General Milley broke the stiffness in the room as he opened his keynote speech by affectionately calling the American major general who organized the conference a knucklehead, eliciting laughter, and then by likening his own time under fire during the Iraq war to conflicts in which African militaries had taken part.

“Many of you in this room are descendants of fighters who practiced guerrilla warfare against the French, the British, the colonial forces of Europe,” General Milley told senior military officials from 37 African countries. “Embedded in your armies is the knowledge of how to fight guerrilla warfare.”

General Milley will be fighting a different type of guerrilla warfare soon, as Mr. Trump’s top military adviser. It is a delicate and highly specialized job to walk the tightrope of giving the president the best military advice possible while saluting and following directives with which one might not fully agree.

He succeeds Gen. Joseph F. Dunford Jr. of the Marines, who was appointed by President Barack Obama.

“You have to have a framework of values and principles that you adhere to — lines in the sand that you will not cross,” Adm. Mike Mullen, chairman of the Joint Chiefs of Staff under Presidents George W. Bush and Obama, said in an interview. “Because standing in the presence of the most powerful person in the world, and having to adhere to those values in a consequential decision; you have to have those values and that framework or you will fail at it.”

Senior officials at the Pentagon insist the American military has no business in partisan politics. During his Senate confirmation hearing in July, General Milley promised that he would not let himself be pushed by the White House. “We will not be intimidated into making stupid decisions,” he said in response to questions from Senator Angus King of Maine. “We will give our best military advice and not keep the consequences to ourselves.”

It is certain he will face challenges in that.

The Pentagon in the Trump presidency has agreed to divert some of its congressionally allotted funding for schools on military bases to instead build the border wall. American service members have worn paraphernalia related to the president’s “Make America Great Again” slogan to Mr. Trump’s speeches on American bases, while the president has attacked his Democratic foes in Congress — angering some active-duty and retired military personnel who feel those in uniform should never be publicly partisan or put on partisan display. The Navy exchanged emails with the White House about keeping the warship John S. McCain out of view while Mr. Trump was visiting Japan, because of the president’s enmity toward the American war hero and senator, who died last year.

And Mr. Trump’s efforts to get the government of Ukraine to go after former Vice President Joseph R. Biden Jr., another political foe, has dragged the Pentagon into the middle of an impeachment crisis, as senior Pentagon leaders are scrambling to explain why military aid to Ukraine was withheld despite a Defense Department letter saying that Kiev had met the benchmarks necessary to get the assistance.

General Milley has not spoken publicly about the Ukraine issue. But it will certainly dog his coming tenure.

“Milley is going to have to craft his relationship with his president himself,” Admiral Mullen said. “For military leaders, operating in a political environment will push you to the limit, and you’ve got to be prepared to say, ‘I’m not going there.’”

‘Vintage EU!’ Boris warned not to be fooled by Brussels’ ‘false promises’ in Brexit row

NDP MP Nathan Cullen not running in the 2019 federal election