The annual Sturgis Motorcycle Rally begins on Friday, just as the infectious Delta variant is producing a surge in cases nationwide. 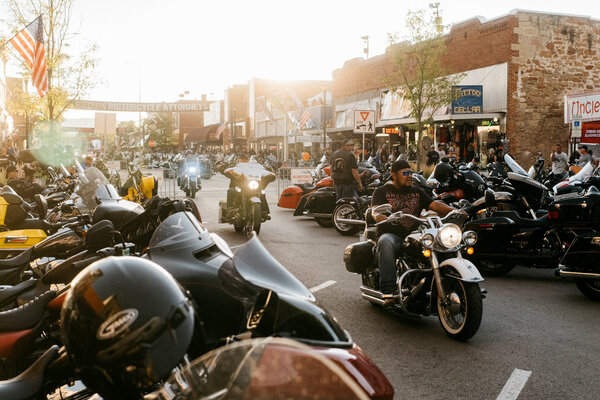 Although most large events shut down last summer because of the coronavirus pandemic, the Sturgis Motorcycle Rally forged ahead, panicking health experts as nearly a half-million motorcycle enthusiasts descended on the Black Hills of South Dakota.

This year’s rally, which begins on Friday, is expected to draw an even larger crowd, just as the infectious Delta variant is producing more new virus cases nationwide than this time last year.

What path the virus will take through Sturgis remains to be seen.

Transmission is more difficult outdoors, vaccines greatly reduce the risk of serious illness, and South Dakota has the fewest new virus cases per capita in the United States. At the same time, the Centers for Disease Control and Prevention considers Delta as contagious as chickenpox, and people are traveling from across the country — several Southern states are in their worst outbreaks of the pandemic — to a region with a relatively low vaccination rate.

Hundreds of new cases were linked to last year’s rally, but because infected bikers returned to their home states, it made contact tracing difficult and obscured the true tally.

Sturgis officials emphasized that the upcoming rally, which lasts for more than a week, would offer coronavirus tests, free masks and hand sanitizer stations. For the first time, attendees will be allowed to carry alcoholic drinks outside without fear of being fined, in an effort to limit crowds inside bars.

Those precautions are being accompanied with warnings.

“We are encouraging people who are in a high-risk category, whether it be age or because of comorbidities, that they come next year,” Dan Ainslie, Sturgis’s city manager, said.

Other large outdoor events have returned this summer, in part because of the availability of vaccines. Attendees at the recent Lollapalooza music festival, which packed people into downtown Chicago, had to either provide proof of vaccination or show a negative coronavirus test from the previous 72 hours.

The motorcycle rally in Sturgis will not have a similar screening process. Vaccines will be made available at the event, including the one-dose Johnson & Johnson shot, but it takes time for them to strengthen immune systems.

Meade County, which includes Sturgis, has a 37 percent vaccination rate — significantly lower than the half of Americans who are fully vaccinated — and the six counties that border it have even lower vaccination rates.

Dr. Shankar Kurra, the vice president for medical affairs at Monument Health, which is headquartered in Rapid City, S.D., and primarily responsible for caring for bikers during the rally, said there were almost no virus cases in the area at the end of June. But like in every state, cases have risen in recent weeks.

“For us, all 100 percent of the cases have been unvaccinated people,” Dr. Kurra said of the recent surge. “We want to make sure people have access to testing so that if there’s an outbreak we can catch it early.”