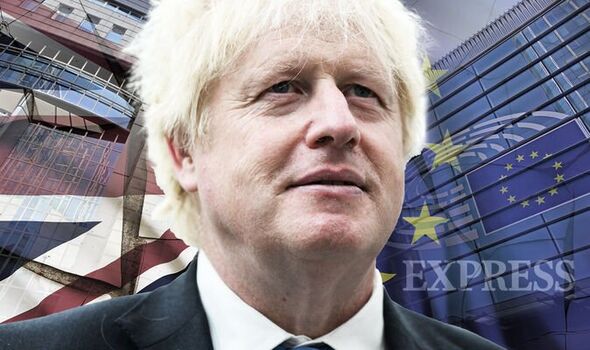 The Prime Minister told how he was proud of delivering Brexit after the country had been mired for years in “political paralysis”. He said reforms he made while in No 10 mean Britain will be able to reap the rewards of freedom from the diktats of Brussels. Even “clever” people who backed Remain are now coming round to the benefits of Brexit, the PM said.

And he lauded our readers for boosting the country with their positive approach.

Mr Johnson bulldozed Brexit through after securing a stunning general election victory that put an end to the repeated Remainer attempts to thwart Britain’s departure from the EU.

The Prime Minister turned around a divided Tory party after years of squabbling over the referendum and even forced Labour into backing his exit deal.

All along the way, Express readers stuck firm with his vision, he said.

“I think Express readers who have been with me and with us in this sort of long march through from 2016 onwards,” he said.

“Six years ago, I think Express readers saw the need to get on and get Brexit done.

“And we’ve got to make sure now that we get the value of that full independence. We’ve got the powers, but let’s continue to get the value.”

Without Brexit, Britain would have been held back from playing the key role it has in securing a united Western response to Russian president Vladimir Putin’s brutal invasion of Ukraine.

Leaving the EU has given the country the freedom to lead the uncompromising pushback against the illegal assault on an ally.

Quitting the bloc also left the UK more room to strike the new Aukus security pact with the US and Australia.

He said: “The idea that we’d have done Aukus before Brexit is crazy. We would never have done it.

“And then look at what we’ve done in Ukraine. I think this is something that Britain has, because of our freedom and our sense of ourselves as independent actors, we’ve been able to take a position and to lead in a way that I think, arguably, we would not have done if we’d been embedded in the system.

“I think you can argue either way, but I think the UK has been absolutely crucial in pulling the West into the proper position of defending Ukraine with supplies, with intelligence and financial support and diplomatic support.

“It’s been absolutely vital. And I know that both candidates are going to continue that view that they absolutely will.”

Mr Johnson said even “nice clever people” who were opposed to Brexit were now coming round to it.

“I’m very positive about the UK and I think that lots of nice and clever people who weren’t keen on Brexit are starting to come round to it, it is the way forward, and that’s the best thing.

Mr Johnson said he was confident his successor will continue his work to rid Britain of the final strands of EU red tape.

Technical rules, known as Solvency II, that harmonise insurance regulations across the EU are among those that must go.

“This is something that is incredibly technical but what they do is stop massive pension funds and investors from putting money into long-term UK prospects,” he said.

“We don’t need this type of EU stuff anymore. We can do things differently and we can do them better.

“It’s the same thing with gene editing and all sorts of other things like the way we manage our chemicals directives. There are things you can do that will enable British business to flourish.

“I just think we need to remember the opportunities that are ahead and to be confident and both candidates I know get that.

“So, levelling-up, seizing Brexit opportunities, believing in Britain, they’re going to go for it.

“Just on the foreign side, just think about how this country is standing up in the world, nevermind just leading the world on free-trade, you know, we’ve started again the whole movement for free-trade deals.

“Dozens and dozens of them we’ve done and we will do more and they will get more and more through again and they will benefit people up and down the country.”

“The potential of this country is enormous.”