Home » Politics » ‘If I’m Sent Back, I Will Die’: Sick Immigrants Tell Their Stories to Congress

WASHINGTON — One immigrant went to California as a child to participate in a drug study that has helped Americans survive with a rare genetic disease. Another, an adolescent girl from Spain, was told by a cardiologist that she must remain in Boston to receive critical care for which her family borrowed thousands of dollars. A teenage boy with cystic fibrosis arrived in the United States “literally dying,” he said, but now has a new lease on life.

On Wednesday, the immigrants told a House Oversight subcommittee why it was imperative that they remain in the country, despite the Trump administration’s abrupt elimination of a program that had enabled them to receive lifesaving medical care without the fear of deportation.

The fate of the immigrants, who all came to the United States legally, remains unclear more than a month after they were first informed by letter that they would have to leave — only to be told early this month that the government would reconsider.

“If I’m sent back, I will die,” Maria Isabel Bueso, 24, of Guatemala, told lawmakers on Wednesday. At three feet tall, sitting in a wheelchair, she was a sympathetic witness.

The unannounced termination on Aug. 7 of the so-called deferred action program, except for military personnel, generated public outrage and drew sharp rebuke from the medical establishment. The New York Times revealed that Ms. Bueso had been ordered to leave the country in 33 days or face deportation.

Ms. Bueso came to the United States when she was 7 to participate in a clinical trial for a drug to treat Mucopolysaccharidosis Type 6, known as MPS 6, an enzyme disease that causes dwarfism, cardiac arrest and blindness, among other ailments. The drug, which was approved by the Food and Drug Administration, has helped extend by a decade the lives of people like her. She continues to receive weekly drug treatment and participate in medical studies.

Last month, United States Citizenship and Immigration Services, without public notice, began sending letters to immigrants like her telling them that it was no longer accepting requests for “deferred action,” renewable every two years. On Labor Day, the agency backtracked and announced that cases pending on Aug. 7 would be reconsidered. It also said that deportation proceedings had not been initiated against anyone who had received the letter.

However, it has not yet said whether the government will continue to grant immigrants the opportunity to stay in the country. It has also not clarified how applicants who need to file extensions must proceed.

In response, Democrats called an emergency hearing, seeking answers about the origin, rationale and revision of the program. They received little information.

“I have clients with sick children now who need access to the program but can’t apply,” said Anthony Marino, an immigration lawyer who represents children receiving treatment for cancer, cerebral palsy and muscular dystrophy.

“What is going to happen to people who fell on the wrong side of Aug. 7? We haven’t received a denial or anything about new procedures in place. We just don’t know,” said Mr. Marino, who is the director of the Irish International Immigrant Center in Boston, which has 19 clients who require deferred action to survive.

The American Civil Liberties Union of Massachusetts and Lawyers for Civil Rights on Sept. 5 filed a lawsuit challenging the termination of the policy on behalf of the center.

According to the lawsuit, the elimination of the policy without public comment or standard regulatory procedures violated the Administrative Procedure Act as well as the guarantee of equal protection in the Constitution. 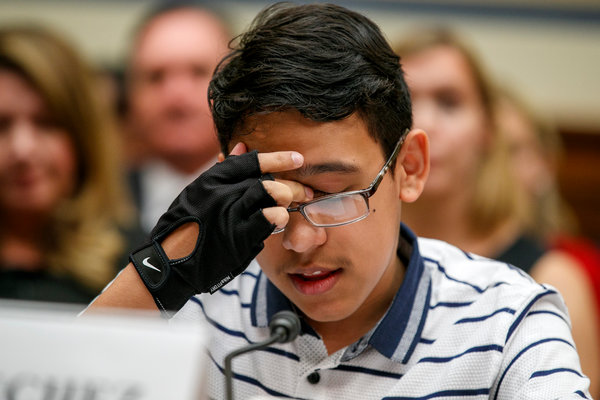 Absent from Wednesday’s hearing was Kenneth T. Cuccinelli II, the acting chief of Citizenship and Immigration Services, whose recent initiatives include efforts to speed up asylum screenings and to make it harder for children of some active service members born abroad to secure citizenship.

Instead, a career official, Daniel Renaud, the associate director for field operations, appeared to take questions, which he largely declined to answer, citing the continuing litigation.

“You cannot answer the genesis of this policy?” Representative Ayanna S. Pressley, Democrat of Massachusetts, asked after failing to elicit responses to her questions.

“I am an operator; I am not a policymaker,” Mr. Renaud said at one point.

Representative Alexandria Ocasio-Cortez, Democrat of New York, apologized to the witnesses “on behalf of the United States of America for the dehumanizing policies that” had brought them before the House panel.

Mr. Renaud said the agency received 1,000 applications annually for deferred action. About 424 cases had been reopened since the government decided to reconsider the policy, he added. He could not answer what would happen to those who have needed to file requests for extensions or apply after Aug. 7.

For those caught in the middle, the stakes are high. “It’s a relatively small program but for the individual who receives deferred action, it is lifesaving protection,” said Shoba Wadhia, an immigration scholar at Penn State Law, who testified and wrote a book on the history of deferred action.

In August, Citizenship and Immigration Services had said that any decisions going forward would have to be made by Immigration and Customs Enforcement, the Department of Homeland Security agency responsible for deporting immigrants. ICE officials then told The Times that it was not their agency’s role to offer deferred action relief and that they had not been consulted about taking on such a role.

Normally, ICE considers requests for deferrals from deportation only for people who have already been ordered removed from the country, Timothy Robbins, the acting executive associate director for enforcement and removal operations at ICE, said at the hearing.

But he said that his agency was in talks with the Department of Homeland Security about the “path going forward for deferred action,” adding that “those are internal discussions we are not prepared to discuss.”

Ms. Bueso is among the immigrants who have received a letter in recent days saying that their cases will be reopened but not whether they need to take any action.

“Our future is still in question with no further communication or direction,” Ms. Bueso said.

Serena Badia, 14, who first came to the United States from Barcelona in 2010 to receive care for a rare heart defect, said that her family never intended to live here. She underwent several surgeries over several trips, and ultimately her doctors at Boston Children’s Hospital advised her parents that she must stay in the United States because of her frail health.

“Our plans to go back to Spain fell apart,” she said. “I needed to stay here to stay alive.”

Jonathan Sanchez, a 16-year-old Honduran, said that his older sister, the first born, had died of cystic fibrosis when she was 6 months old. When he was 12, his parents came to America legally to seek better care for him, which he receives to this day, because, he said, his cystic fibrosis meant that “I could not do anything that an average person could do. I could not walk too much.”

“I could not run, jump, eat or sleep the way other people do,” he said, “and even going to the bathroom was complicated.”

“My mother and father are so afraid for me that they have asked an American friend of ours if she will adopt me, if it comes to that, so that I can keep getting treatment,” he said.

Parliament: Three in four white-collar jobs in growth sectors filled by locals, says Josephine Teo
We and our partners use cookies on this site to improve our service, perform analytics, personalize advertising, measure advertising performance, and remember website preferences.Ok