The footage offered a glimpse of the chaos that has been unfolding in Texas and called into question President Biden’s decision to swiftly deport thousands. 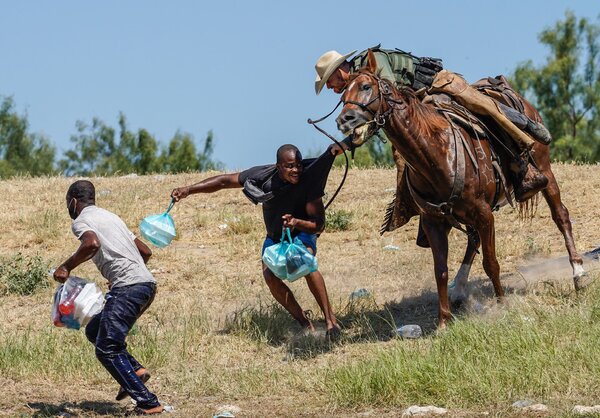 By Eileen Sullivan and Zolan Kanno-Youngs

WASHINGTON — Images of Border Patrol agents on horses, pushing back Haitian migrants crossing the Rio Grande to try to reach U.S. soil, have prompted outrage among Democrats and called into question President Biden’s decision to swiftly deport thousands who had been arriving en masse at a small Texas border town.

Vice President Kamala Harris on Tuesday called the treatment “horrible” and said she planned to discuss the issue with Alejandro N. Mayorkas, the secretary of the Homeland Security Department, which has started an investigation.

“Human beings should never be treated that way,” Ms. Harris said. “And I’m deeply troubled about it.”

Asked if Mr. Biden had seen the images, the White House press secretary, Jen Psaki, said: “He believes that the footage and photos are horrific. They don’t represent who we are as a country. And he was pleased to see the announcement of the investigation.”

The photographs and video footage of the agents’ interactions with the migrants, which were widely circulated online, offered a glimpse of the chaos that had been unfolding since last week, when large groups of Haitians started crossing the Rio Grande and illegally entering the United States in Del Rio, Texas. It is the latest example of the Biden administration, in its attempts to assert control over soaring numbers of border crossings, belying the president’s pledge to restore an asylum program for vulnerable families fleeing persecution and poverty.

The videos appear to show mounted Border Patrol agents corralling migrants and forcing them back to Mexico. Some of the agents were gripping and waving what appeared to be reins, prompting accusations that they had been using whips against them. One video captured an agent shouting an expletive at a migrant.

The Biden administration has flown more than 1,000 people to Haiti since Sunday and plans to run seven flights a day starting Wednesday, with room for 135 migrants on each plane, according to an official familiar with the plan who spoke on the condition of anonymity to discuss internal strategies. But some top Democrats said that strategy was wrong.

“I urge President Biden and Secretary Mayorkas to immediately put a stop to these expulsions,” Senator Chuck Schumer of New York, the majority leader, said on Tuesday. “We cannot continue these hateful and xenophobic Trump policies that disregard our refugee laws.”

The public health rule that the Trump administration put in place at the beginning of the coronavirus pandemic has been used more than 700,000 times under the Biden administration to quickly expel migrants, many of whom are seeking asylum.

Speaker Nancy Pelosi said that Congress was closely monitoring what she called a “heartbreaking” situation.