WASHINGTON — North Korea is moving ahead with its ballistic missile program at 16 hidden bases that have been identified in new commercial satellite images, a network long known to American intelligence agencies but left undiscussed as President Trump claims to have neutralized the North’s nuclear threat.

The satellite images suggest that the North has been engaged in a great deception: It has offered to dismantle a major launching site — a step it began, then halted — while continuing to make improvements at more than a dozen others that would bolster launches of conventional and nuclear warheads.

The existence of the ballistic missile bases, which North Korea has never acknowledged, contradicts Mr. Trump’s assertion that his landmark diplomacy is leading to the elimination of a nuclear and missile program that the North had warned could devastate the United States.

“We are in no rush,” Mr. Trump said of talks with the North at a news conference on Wednesday, after Republicans lost control of the House. “The sanctions are on. The missiles have stopped. The rockets have stopped. The hostages are home.”

His statement was true in just one sense. Mr. Trump appeared to be referring to the halt of missile flight tests, which have not occurred in nearly a year. But American intelligence officials say that the North’s production of nuclear material, of new nuclear weapons and of missiles that can be placed on mobile launchers and hidden in mountains at the secret bases has continued.

And the sanctions are collapsing, in part because North Korea has leveraged its new, softer-sounding relationship with Washington, and its stated commitment to eventual denuclearization, to resume trade with Russia and China.

Moreover, an American program to track those mobile missiles with a new generation of small, inexpensive satellites, disclosed by The New York Times more than a year ago, is stalled. The Pentagon once hoped to have the first satellites over North Korea by now, giving it early warning if the mobile missiles are rolled out of mountain tunnels and prepared for launch.

But because of a series of budget and bureaucratic disputes, the early warning system, begun by the Obama administration and handed off to the Trump administration, has yet to go into operation. Current and former officials, who said they could not publicly discuss the program because it is heavily classified, said there was still hope of launching the satellites, but they offered no timeline.

The secret ballistic missile bases were identified in a detailed study published Monday by the Beyond Parallel program at the Center for Strategic and International Studies, a major think tank in Washington. 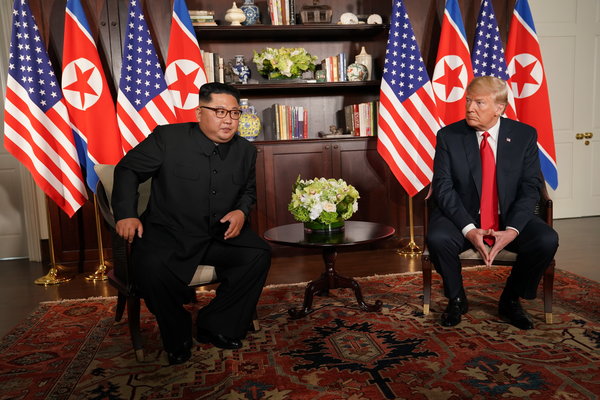 The program, which focuses on the prospects of North-South integration, is led by Victor Cha, a prominent North Korea expert whom the Trump administration considered appointing as the ambassador to South Korea last year. His name was pulled back when he objected to the White House strategy for dealing with Kim Jong-un, the North Korean leader.

A State Department spokesman responded to the findings with a written statement suggesting that the government believed the sites must be dismantled: “President Trump has made clear that should Chairman Kim follow through on his commitments, including complete denuclearization and the elimination of ballistic missile programs, a much brighter future lies ahead for North Korea and its people.” A spokesman for the C.I.A. declined to comment.

The revelation of the bases comes as Mr. Trump’s signature piece of diplomacy, based on his meeting exactly five months ago with Mr. Kim, appears in peril. Publicly, Mr. Trump remains relentlessly optimistic, to the point that he said at a campaign rally that he and Mr. Kim, one of the world’s most brutal dictators, “fell in love.” But last week, talks with the North hit another snag, as it declared that it would not send its chief negotiator to meet with Secretary of State Mike Pompeo in New York to plan the next summit meeting.

Since the initial meeting between Mr. Trump and Mr. Kim, on June 12 in Singapore, the North has yet to take the first step toward denuclearization: providing the United States with a list of its nuclear sites, weapons, production facilities and missile bases. North Korean officials have told Mr. Pompeo that would amount to giving him a “target list.”

American officials have responded that they already have a detailed target list — one that goes back decades — but want to use the North’s accounting to determine whether it is revealing all the known facilities and moving honestly toward denuclearization.

The new satellite imagery suggests the opposite.

“It’s not like these bases have been frozen,” Mr. Cha, the leader of the team that studied the images, said in an interview. “Work is continuing. What everybody is worried about is that Trump is going to accept a bad deal — they give us a single test site and dismantle a few other things, and in return they get a peace agreement” that formally ends the Korean War.

Mr. Trump, he said, “would then declare victory, say he got more than any other American president ever got, and the threat would still be there.”

The North Korea experts who have examined the images believe that the North’s motivations are fairly easy to interpret. “It looks like they’re trying to maximize their capabilities,” Joseph S. Bermudez Jr., a co-author of the report and a veteran analyst of satellite images of North Korea, said in an interview. “Any missile at these bases can take a nuclear warhead.”

“The level of effort that North Korea has invested in building these bases and dispersing them is impressive,” he added. “It’s very logical from a survival point of view.”

Weapons experts, as well as Mr. Pompeo, say that North Korea, despite engaging in denuclearization talks, continues to produce the fissile material that fuels nuclear arms. The North is believed to have about 40 to 60 nuclear warheads.

The new report profiles a missile base known as Sakkanmol, a little more than 50 miles north of the Demilitarized Zone. It is one of the closest to South Korea. Seoul, the capital, is about 80 miles away, as are American troops.

The report contains a dozen or so satellite images of Sakkanmol — each heavily annotated to show the base checkpoint, headquarters buildings, barracks, security areas, maintenance depots and the entrances to the warrens of underground tunnels that hide mobile missiles and their transporter trucks.

The base runs through a narrow mountain valley over an area of three square miles. Each tunnel entrance, the report says, is protected by a neighboring berm of rock and dirt about 60 feet high and two outward-opening doors about 20 feet wide. They are meant to protect the tunnel entrances from artillery fire and aerial attack.

The report says the Sakkanmol base conceals seven lengthy tunnels that can accommodate up to 18 transporters that move the missiles. Each is typically fitted with one warhead.

If tensions rose, the report says, the missiles would be transported from the base to prearranged launching sites — often no more than a wide spot in a road. The mobile launchers can move quickly — they can be ready to fire in under an hour — which is why the United States has been trying to get the small satellites into the sky for early warning. The satellites have a special kind of sensor using “synthetic aperture radar” that cuts through clouds.

The current, multibillion-dollar constellation of large satellites that keep an eye on North Korea is often out of position, and officials say the country’s ballistic missile sites are under surveillance less than 30 percent of the time. (The exact figure is classified.)

A map of North Korea in the report shows three belts of missile bases that run from short-range tactical emplacements, to sites with midrange missiles that could strike most of South Korea, Japan and American bases in the Pacific, to strategic ones for missiles that threaten to reach American shores.

The strategic bases appear to be home to the intercontinental ballistic missiles that North Korea test-fired in 2017, alarming the world. The North’s tests, while demonstrating significant progress, did not prove that it had solved all the technical problems inherent in launching a nuclear warhead that could reach the continental United States. That is why Mr. Trump and Mr. Pompeo have argued that the halt to missile testing is a major accomplishment: It prevents Mr. Kim from demonstrating that he can take those last steps.

The report, which was also written with Lisa Collins, a research fellow at the center, supplemented the satellite imagery with interviews of North Korean defectors and government officials around the world.

The North’s missile bases, with few exceptions, are “in mountainous terrain, often spread out within narrow dead-end valleys,” Mr. Bermudez said. He added, “These bases simply do not look like missile operating bases as seen in the United States, Russia, China or Europe.”

Major nuclear powers tend to house their land-based missiles in underground silos, which can be vulnerable to pre-emptive attack. The North’s heavy reliance on missiles that can be repositioned with the changing circumstances of war is part of an effort to avoid that mistake, while giving the country a stronger hand in the game of nuclear diplomacy and brinkmanship.

“The bases are clearly active,” Mr. Cha said. “It’s not like these things have been frozen and are decaying.”

Election results vs exit poll: How accurate was exit poll? How many seats did Tories win?