For more than a decade, the Susan B. Anthony List and the American Principles Project have pursued cultural and policy priorities from the social conservative playbook, backing laws to ban abortion once a fetal heartbeat could be detected and opposing civil rights protections for L.G.B.T.Q. people. From their shared offices in suburban Virginia, they and their affiliated committees spent more than $20 million on elections last year.

But after Donald J. Trump lost his bid for a second term and convinced millions of Americans that nonexistent fraud was to blame, the two groups found that many of their donors were thinking of throwing in the towel. Why, donors argued, should they give any money if Democrats were going to game the system to their advantage, recalled Frank Cannon, the senior strategist for both groups.

“‘Before I give you any money for anything at all, tell me how this is going to be solved,’” Mr. Cannon said, summarizing his conversations. He and other conservative activists — many with no background in election law — didn’t take long to come up with an answer, which was to make rolling back access to voting the “center of gravity in the party,” as he put it.

Passing new restrictions on voting — in particular, tougher limits on early voting and vote-by-mail — is now at the heart of the right’s strategy to keep donors and voters engaged as Mr. Trump fades from public view and leaves a void in the Republican Party that no other figure or issue has filled. In recent weeks, many of the most prominent and well-organized groups that power the G.O.P.’s vast voter turnout efforts have directed their resources toward a campaign to restrict when and how people can vote, with a focus on the emergency policies that states enacted last year to make casting a ballot during a pandemic easier. The groups believe it could be their best shot at regaining a purchase on power in Washington.

Their efforts are intensifying over the objections of some Republicans who say the strategy is cynical and shortsighted, arguing that it further commits their party to legitimizing a lie. It also sends a message, they say, that Republicans think they lost mostly because the other side cheated, which prevents them from grappling honestly with what went wrong and why they might lose again.

Some also argue that setting new restrictions on voting could undercut the party just as it was making important gains with Black and Latino voters, who are more likely to be impeded by such laws.

“Restricting voting is only a short-term rush. It’s not a strategy for future strength,” said Benjamin Ginsberg, one of the Republican Party’s most prominent election lawyers, who has criticized Mr. Trump and other members of the party for attacking the integrity of the voting process. 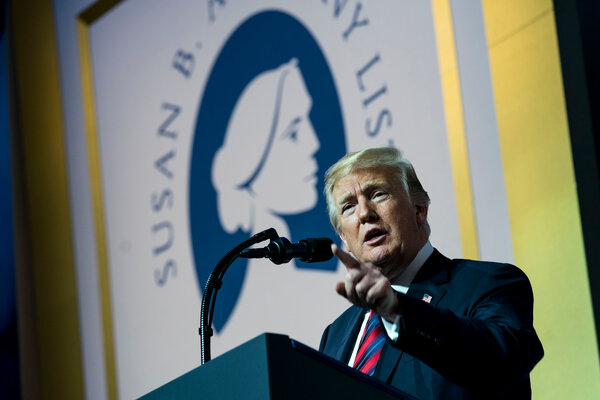 “Look at what it really means,” Mr. Ginsberg added. “A party that’s increasingly old and white whose base is a diminishing share of the population is conjuring up charges of fraud to erect barriers to voting for people it fears won’t support its candidates.”

Just as notable as the brand-name conservative groups that are raising money off Mr. Trump’s revisionism — Susan B. Anthony List, the Heritage Foundation, the Family Research Council, Tea Party Patriots — are some of the heavy hitters that are sitting this fight out. Americans for Prosperity, the political organization funded by the Koch fortune, is not supporting the efforts to pass more ballot access laws, nor are other groups in the multimillion-dollar Koch political network.

The debate over voting laws is also part of the bigger fight over the future of the Republican Party, and whether it should continue being so focused on making Mr. Trump and his hard-core voters happy.

For now, many conservative groups are choosing to side with the former president, even at the risk of feeding corrosive falsehoods about the prevalence of voter fraud.

It is certainly the more financially secure path and, some say, the one where they will encounter the least resistance. With polls showing that at least two-thirds of Republicans harbor doubts about President Biden’s legitimacy or believe that Mr. Trump somehow won more votes despite receiving seven million fewer than his opponent, Republican consultants said they were following their party.

Some expressed a certain resignation about the situation: Mr. Trump created a perception that is now their party’s reality.

“I’m not someone who thinks that China hacked the voting machines,” said Terry Schilling, the president of the American Principles Project. But at the same time, he said, “if you’re a conservative organization and you have small-dollar donors, you’re hearing this from everywhere: ‘Well, what’s the point in voting?’”

One major focus for conservatives is rolling back the Covid-related changes that states enacted to make absentee voting easier last year. Mr. Schilling said his group’s intention was to “restore lost faith” in the process with policies that don’t allow those emergency procedures to become permanent. The American Principles Project, like other groups on the right, supports making states verify signatures on absentee ballots with signatures they have in their voter databases, and wants ballots sent only to people who request them.

Voters in Georgia who were disillusioned after Mr. Trump’s defeat — many of whom believed his far-fetched and debunked claims of voting by pets, dead people and other irregularities — helped cost Republicans control of the Senate. Georgia Republicans are now pushing a raft of new voting restrictions that Democrats have called political payback under the guise of “election integrity.”

Many of the conservative organizations jumping in have a large network of activists in churches and anti-abortion groups across the country.

The Susan B. Anthony List and the American Principles Project recently announced a joint “election transparency” campaign and set a fund-raising goal of $5 million. They hired a top conservative activist who is a former Trump administration official to lead it. They have organized conference calls for activists with other social conservative groups across the country, and say they have found participants to be enthusiastic about getting involved even if election law is entirely new to them.

The Family Research Council, which advised the Trump administration on policies like ending military eligibility for transgender people and expanding the definition of religious freedom, recently dedicated one of its regular online organizing sessions, the “Pray Vote Stand Townhall,” to encouraging people to lobby their state legislators.

Tony Perkins, the group’s president, expressed optimism about the number of voting bills that were moving along and suggested that last year’s election results were tainted. “We’ve got 106 election-related bills that are in 28 states right now,” he said to the audience. “So here’s the good news: There is action taking place to go back and correct what was uncovered in this last election.”

Joining Mr. Perkins on the stage was Michael P. Farris, the president of the deep-pocketed and powerful Christian legal group Alliance Defending Freedom. He chimed in approvingly: “Let me just say, ‘Amen,’” he said.

Also throwing its weight behind the campaign is the influential Heritage Foundation and its political arm, Heritage Action for America, which recently announced that it planned to spend millions of dollars to support voting policies that are popular with conservatives. Those include laws that would require identification for voters and limit the availability of absentee ballots, as well as other policies that Heritage said would “secure and strengthen state election systems.”

Several Republican strategists said that while the “stolen” election canard was accepted widely among rank-and-file Republican voters, they were surprised to find how deeply it had taken hold with major donors, who seem the most convinced of its truth and eager to act.

Groups that are fighting these attempts to restrict ballot access said that the organizing on the right was so new that its impact had been hard to gauge. Michael Waldman, the president of the Brennan Center for Justice, said Republican legislatures seemed to understand the power of this issue on their own and didn’t need much persuasion to act.

“Are we seeing a lot of new lawsuits, new lobbying, other things on the ground?” he said. “The answer is mostly no. We’re seeing a lot of fund-raising.” Still, the number of groups involved and the salience of the issue was striking, he said.

“There’s massive organizational infrastructure behind it,” Mr. Waldman said. “It’s hard to identify too many unifying issues right now in the Republican Party. But this seems to be one of them.”

As contentious as some of the past conservative-led campaigns to restrict voting were, this time is even more emotionally and politically charged given how closely associated it is with Mr. Trump and the Jan. 6 riot at the Capitol that he incited. Some conservatives said the association with that day complicated what could be relatively uncontroversial changes to regulate how absentee ballots are sent out, collected and counted now that so many more people are likely to request them in the future.

“We also took a look at the election results, and we don’t believe that it was stolen. But that doesn’t mean we don’t think there aren’t things that can be improved,” said Jason Snead, the executive director of the Honest Elections Project. The group supports a range of changes: Some would regulate mail-in voting at the margins, like requiring that ballots are mailed out no earlier than three weeks before the election and received by the time polls close on the day of.

Others would no doubt be more controversial, like banning the organized, third-party collection of ballots that conservative critics call ballot harvesting.

Mr. Snead said it was problematic that the 2020 election and its aftermath had cast a shadow over the entire issue. “There’s definitely a recognition that we don’t want this to be something that is tied to the last election,” he said. But as someone who started his work on election law before Mr. Trump was elected and shares the broader goal of establishing more conditions on voting, he acknowledged that the environment had never been riper.

“It has risen to a degree of prominence it probably has never enjoyed,” Mr. Snead said.

Trump and Pompeo Embrace Autocrats and Disparage Opponents at Home