WASHINGTON — Iran has exceeded a key limitation on how much nuclear fuel it can possess under the 2015 international pact curbing its nuclear program, effectively declaring that it would no longer respect an agreement that President Trump abandoned more than a year ago, state media reported on Monday.

The breach of the limitation, which restricted Iran’s stockpile of low-enriched uranium to about 660 pounds, does not by itself give the country enough to produce a nuclear weapon. But it signals that Iran may be willing to abandon the limits and restore the far larger stockpile that took the United States and five other nations years to persuade Tehran to send abroad.

The developments were reported by the semiofficial Fars news agency, citing an “informed source.” It was unclear how much the action would escalate the tensions between Washington and Tehran after the downing of an American surveillance drone in June nearly resulted in military strikes.

But it returns the focus to Iran’s two-decade pursuit of technology that could produce a nuclear weapon — exactly where it was before President Barack Obama and President Hassan Rouhani of Iran struck their deal four years ago.

While the Trump administration had no immediate reaction to the announcement, Secretary of State Mike Pompeo said last month that the United States would never allow Iran to get within one year of possessing enough fuel to produce a nuclear weapon. His special envoy for Iran, Brian H. Hook, has often said that under a new deal, the United States would insist on “zero enrichment for Iran.”

Iran has so far rejected beginning any negotiation, saying that the United States must first return to the 2015 agreement and comply with all of its terms.

“Now the inevitable escalation cycle seems well underway,” Philip H. Gordon, a Middle East expert at the Council on Foreign Relations and a former Obama administration national security official, wrote in an article this spring for Foreign Affairs magazine shortly after Mr. Rouhani telegraphed that he intended to walk away from the deal’s restrictions. Iran was on a “slippery slope” to fully pulling out of the agreement, Mr. Gordon added.

On June 28, after meeting in Vienna with European officials who had promised to set up a barter system with Iran to compensate for the effects of American sanctions that Britain, France and Germany say are unwise, Iranian officials said the effort was insufficient. Mr. Hook has estimated the sanctions have cost Iran $50 billion in lost oil sales, far more than the system the Europeans are putting in place would generate.

As they left the meeting, Iranian officials hinted that the breaking of the limit would go forward, though it could just as easily be reversed in the future. 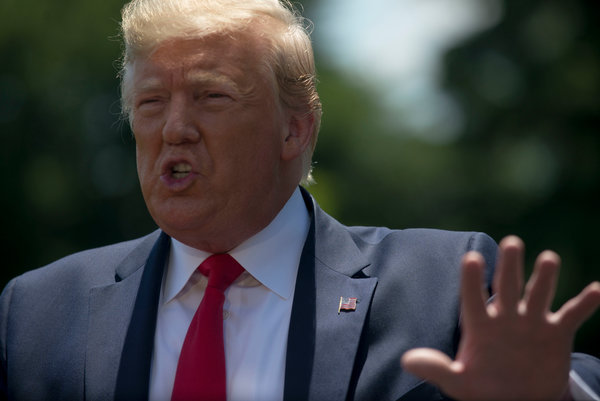 For now, however, Iran seems on a pathway to step-by-step dissolution of key parts of the accord. Mr. Rouhani has said that Iran will begin raising the level of uranium enrichment this month.

It is possible that exceeding the stockpile limit is largely a negotiating tactic, a way for Tehran to impose costs on Washington after enduring more than a year of sanctions. But the move is risky. Mr. Rouhani and his foreign minister, Mohammad Javad Zarif, who negotiated the deal with the secretary of state at the time, John Kerry, are betting that the Europeans will declare that Mr. Trump, not Iran, is responsible for the collapse of the nuclear accord.

That may prove the case. European officials, in their most vivid split from Mr. Trump, are scrambling to preserve the agreement, fearful that if it falls apart, the United States and Iran could be headed toward military conflict — and perhaps war.

But a section of the pact allows the Europeans to invoke a so-called snapback of sanctions if Iran violates the terms. The Iranians say they are within their rights because the reimposition of sanctions last year by the United States gave them the grounds to halt their commitments, as well.

For advocates of the 2015 deal, like former members of the Obama administration, Mr. Trump pushed Iran into the announcement. Among the recently imposed sanctions was one that threatened action against any country that bought low-enriched uranium from Tehran. To comply with the stockpile limits, Iran shipped low-enriched uranium to Russia in return for natural uranium. With that exchange now barred, it was only a matter of time before Iran exceeded the limits.

Even before the announcement, the Pentagon and the nation’s intelligence agencies — led by the C.I.A. and the National Security Agency — were beginning to review what steps to take if the president determined that Iran was getting too close to producing a bomb.

A decade ago, the Obama administration conducted a highly classified cyberattack, code-named Olympic Games, at the Natanz enrichment site. The breach neutralized Iran’s centrifuges, which spin at supersonic speeds to enrich uranium, and destroyed about 1,000 of the 5,000 machines then in operation. But after two years, Iran rebounded, and when the nuclear accord came into effect, it had more than 17,000 centrifuges, most of which were dismantled under the agreement.

If the United States targets Iran’s uranium enrichment operations, experts say, it is likely to take aim again at the Natanz site. But this time, the Iranians appear far better prepared. Other major nuclear sites, including the primary production facility for converting raw uranium to a gas form, and factories that produce next-generation centrifuges, are also likely targets, according to former officials.

In the weeks before the announcement, Saudi Arabia’s state news media has called for “surgical strikes” against Iran, as has Senator Tom Cotton, who pressed for military action after the downing of the drone. Mr. Trump initially agreed, then pulled back.

But any operation against Iran’s nuclear infrastructure, either with conventional arms or cyberweapons, would be highly risky. And some administration officials warn that acting now would be premature. Even if Iran possesses 800 or 900 kilograms of uranium, it would be insufficient for a single bomb. That threshold is not likely to be crossed until later this summer.

“If there is conflict, if there is war, if there is a kinetic activity, it will be because the Iranians made that choice,” Mr. Pompeo said last week during a visit to New Delhi. “I hope that they do not.”

Brexit latest: ‘DON’T’ call general election Major warns May – it will ‘SOLVE NOTHING’