In an interview, foreign minister Simon Coveney hit back at the claims the European Union’s refusal to drop demands over access to Britain’s fishing grounds and common standards had drawn out the wrangling. But he insisted a deal was still possible despite both sides’ disagreements on the main sticking points. Mr Coveney said: “The British Government was offered a much longer transition period and they turned it down yet they’re now blaming the EU for it. That’s just ridiculous.

“They were very clear that they didn’t want any more time despite the fact the EU was asking them to ask for it. The decision on the timelines is very much a British Government decision, not an EU one.

“I do think a deal is possible but it needs to be finalised this week if possible because we really are running out of time.”

There is a growing expectation a Brexit trade deal can be reached by the end of the week if Brussels agrees to compromise on its hardline demands.

Downing Street is adamant there is a deal on the table that is based on the one the bloc agreed with Canada. 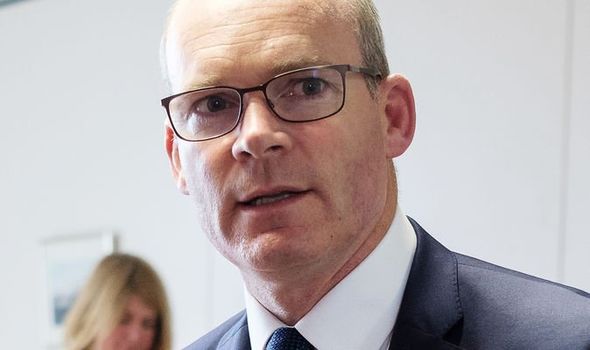 Mr Coveney believes both sides will eventually find an agreement because of a no-deal Brexit will be “so costly and so disruptive”.

He added: “There’s a big incentive to get a deal done.”

But before an agreement is found, Mr Coveney predicted further acrimonious exchanges between the UK and EU.

He claimed both sides needed to avoid entering into a blame game in the final days of negotiating.

Mr Coveney said: “The EU side has been respectful and consistent, but also firm throughout this negotiation, regardless of people who are trying now to blame the EU for that consistency because the truth of Brexit is now being exposed in terms of the challenges of it.

“This is something the UK and the EU together have to find a way forward on as opposed to focus on a blame game as regards who’s at fault.”

Meanwhile Dominic Raab has insisted EU negotiators must back down from their demands before any agreement can be reached.

The Foreign Secretary said: “If they show the pragmatism, the goodwill and good faith that in fairness I think has surrounded the last leg of the talks, and certainly we have shown our flexibility, I think there is a deal to be done.”

“On fishing there’s a point of principle – as we leave the EU we’re going to be an independent coastal state and we’ve got to be able to control our waters,” he said.

Factbox: Biden vows to pick woman for a running mate; some potential names