Four decades later, another elder statesman seeks to transform Americans’ ideas about the size of government. 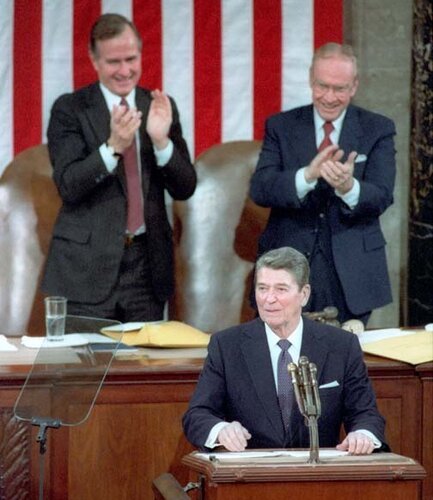 Hi. Welcome to On Politics, your wrap-up of the week in national politics. I’m Lisa Lerer, your host.

Forty years ago, a new president stood before a joint session of Congress and delivered a simple message: “Our government is too big, and it spends too much.”

Sitting in the audience, the junior senator from Delaware — a young Joseph R. Biden Jr. — couldn’t possibly have predicted how President Ronald Reagan’s words would come to define politics for generations. But for the decades that followed, Mr. Biden, along with most of his party, would operate in the shadow of Mr. Reagan, believing that an outright embrace of big government would be politically detrimental. Like so many Democrats, he joined efforts to curb deficits, fretted about government spending and generally favored more incremental kinds of policies that could attract bipartisan support.

This past week, four decades to the day after Mr. Reagan’s address, Mr. Biden put forward a very different approach, one that historians, political scientists and strategists in both parties believe could signal the end of fiscal conservative dominance in our politics. In his speech before Congress, Mr. Biden sketched out an agenda packed with “once in a generation” investments that would touch nearly every corner of American life, everything from cancer research to child care to climate change.

“It’s time we remembered that ‘we the people’ are the government. You and I,” he said. “Not some force in a distant capital.”

With Mr. Biden’s early agenda, his administration is making what amounts to a $6 trillion bet that the dueling crises of the coronavirus pandemic and the economic downturn, paired with the political upheaval of the Trump era, have rekindled the romance between Americans and their government. Through his Covid relief bill and infrastructure proposals, Mr. Biden is striving to prove that government can craft policies that tangibly improve our daily lives, delivering benefits like improved roads, more education, better internet, paid time off to care for a sick family member, and help supporting older parents.

White House aides say that Mr. Biden also sees government as the solution for a more abstract kind of problem: a deeply polarized country that might be unified around a national response to a series of crises involving climate change, racial justice, public health and the economy. The administration is hardly hiding its effort — Mr. Biden has self-consciously cloaked himself in the legacy of Franklin D. Roosevelt, an attempt to hark back to an earlier age of liberalism when government pulled the country out of despair.

“We have to prove democracy still works,” he said in his speech on Wednesday. “That our government still works — and can deliver for the people.”

Boris Johnson told UK doesn’t need Scotland – ‘They need us more than we need them!’