Home » Politics » Kirsten Gillibrand Is Struggling. Will Abortion Rights Be Her Rallying Cry?

In the two years leading up to her 2020 run, Senator Kirsten Gillibrand spent millions of dollars building up a network of online and grass-roots donors who could power her coming presidential campaign.

But after Ms. Gillibrand’s big announcement in January, her expensively laid plans unraveled as those potential contributors all but vanished.

Ms. Gillibrand raised less money from small contributors in her first quarter as a presidential candidate than she had in six of the eight previous quarters when she wasn’t running for president, according to federal campaign records.

[Sign up for our politics newsletter and join our conversation about the 2020 presidential race.]

The poor showing has left the New York senator short on one of the Democratic National Committee’s key criteria — having at least 65,000 donors — to qualify for the party’s official debates that begin next month.

And she has seen herself lapped in the small-donor chase by lesser-known names, including two Democratic neophytes, Andrew Yang, an entrepreneur with the tagline “humanity first” advocating a universal basic income, and Marianne Williamson, an author and spiritual guru.

Ms. Gillibrand is now reorganizing her online operations and trying to turn around her political and financial fortunes with her high-profile criticism of the new laws in Georgia, Alabama and other states that drastically restrict abortions. As she sounds the alarm, and raises money off her fight, she is trying to attract new supporters to a campaign in great need of them.

All told, 12 candidates have said they acquired at least 65,000 donors ahead of Ms. Gillibrand — former Vice President Joseph R. Biden Jr. announced doing it in less than 12 hours — despite her decade-long standing as a senator for one of the most donor-rich Democratic states in the nation. 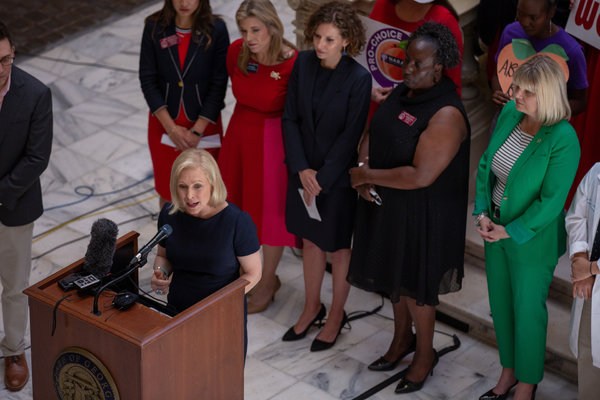 Missing the donor mark is just one aspect of a campaign that has struggled for traction from the outset. What little national attention Ms. Gillibrand did receive early on was often soaked up by old questions, from voters and the media, about her past, especially her switched positions on guns and immigration a decade ago, as well as her push in 2017 for Al Franken to resign from the Senate following accusations of sexual misconduct.

Mired near the bottom of most polls at 1 percent or less, she has drawn thinner crowds on the trail than the top contenders, and her televised CNN town hall event drew the worst ratings of any weekday town hall that the network has hosted. She has struggled to secure home-state support and also faced a complaint about her own office’s handing of a sexual harassment complaint that eventually resulted in the departure of the aide in question.

All the while, she spent 80 percent of every dollar she raised through March, among the field’s fastest spending rates.

“It is surprising to me she hasn’t resonated with the electorate,” said Patti Solis Doyle, a Democratic strategist and campaign manager for Hillary Clinton in 2008. “She’s had the resources, she’s had the time, she’s also had a national profile, particularly on issues that truly resonated at least in the 2018 midterms: a strong advocate on sexual harassment and women’s issue’s writ large.”

She has also run into some bad luck. Any would-be momentum from a small but splashy launch rally in March outside a Trump property in Manhattan was smothered when, hours later, the first summary of the special counsel’s report on Russian election interference was released. And her proposal for “democracy dollars” — giving voters money to donate to campaigns — came as news broke that the special counsel objected to that initial summary.

Ms. Gillibrand’s argument that she is the advocate in chief for women has been clouded by the fact that a historic number of women are running, including three Senate colleagues: Kamala Harris, Elizabeth Warren and Amy Klobuchar.

But the renewed Republican push over abortion may offer Ms. Gillibrand an opening. She booked a last-minute trip to Georgia on Thursday to decry the efforts and blitzed the cable networks. “This is a war on women,” she declared. Her campaign sent emails and bought digital ads and said donations came in from all 50 states. 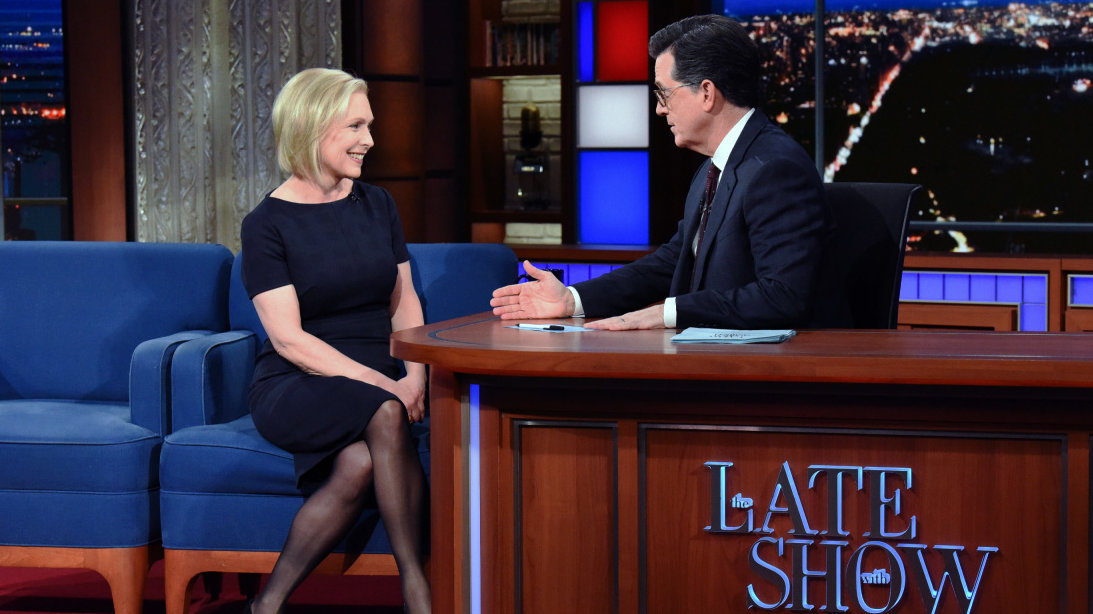 The deputy campaign manager of one of her rivals, Senator Cory Booker, and the leader of a major teachers union both announced a donation to her to ensure she would make the debate stage.

One factor in Ms. Gillibrand’s favor is that she entered the race with more than $10 million in Senate funds she can spend on 2020. Meredith Kelly, her communications director, said the campaign was planning to hire an additional 100 staff members by this summer in the early states, mostly in Iowa and New Hampshire.

“Kirsten is in the top tier of cash on hand,” Ms. Kelly said. “Resources are resources.”

[Check out our tracker of the 2020 Democratic candidate field.]

Her campaign says she is connecting one voter at a time in coffee shops and living rooms. But in a celebrity-fueled climate dominated by mass media and viral moments online, it is not clear such a pathway exists in 2020. Ms. Gillibrand has taken to calling the primary a “marathon and not a sprint,” a tacit admission she has fallen behind.

Her campaign has also begun trying to drive the national conversation, pledging to nominate only judges who would uphold Roe v. Wade and asking candidates to refuse to use hacked materials. She is the only Democratic candidate so far to hold an MSNBC town hall event (its ratings were far higher than her CNN one).

On the trail, Ms. Gillibrand has tried to put on a happy face. She has played beer pong in New Hampshire. She swapped dresses with a drag queen in Des Moines. She arm-wrestled with a college student in Ames, Iowa.

Still, the sting of failing to hit financial goals has been the source of particular consternation inside the campaign, people familiar with the operation said.

Ms. Gillibrand herself has long used her fund-raising as a measure of success. She wrote in her memoir, “Off the Sidelines,” that after she was appointed to the Senate to replace Mrs. Clinton in 2009, she changed her computer password to “3M1stQ” to serve as a constant reminder of her financial target: $3 million in the first quarter of the year.

A decade later, that is all she raised when running for president.

Her $3 million quarterly haul was about half of what some rivals raised in their first 24 hours.

Now, Ms. Gillibrand is making some changes. Her campaign is winding down the role for one of her longest-serving political and digital firms, Anne Lewis Strategies, where she spent $5.6 million in 2017 and 2018. That was nearly 60 cents of every dollar she spent, much of it to buy Facebook ads. Ms. Lewis’s firm received another $826,000 in Ms. Gillibrand’s first two-plus months as a presidential candidate — by far her single largest expenditure.

“Our number of donations per day was 1.5 times what it was in April,” Ms. Kelly said.

“You are going to constantly be evaluating strategies and improving strategies,” she added. “That’s the beauty of getting in as early we did, we have plenty of time moving forward.”

Sarah Morgenthau, a donor on Ms. Gillibrand’s national finance committee, said the senator has “an inner strength and resilience that will carry her through.”

“She is competitive. She is a fighter,” Ms. Morgenthau said. “If you spend five minutes with the senator, you feel her incredible optimism and enthusiasm for what she’s doing.”

It does remain extremely early. Four years ago, Donald J. Trump still had not even formally declared for president. But in a 23-candidate field, grabbing attention remains a steep challenge for all but the top tier, and she is on the outside looking in.

Ms. Gillibrand, who has run on the tagline “Brave wins,” has said she has suffered for calling for Mr. Franken to resign. “Democratic megadonors are blacklisting me because I refused to stay silent,” read online ads asking for $1 to ensure she makes the debates.

So far 11 candidates have qualified both via the donor threshold and polling criteria (achieving 1 percent support in three D.N.C.-sanctioned polls). Ms. Gillibrand is among those to secure a spot only via polling.

“She’s in a precarious place in a modern presidential campaign where we have elite consensus emerging about who the top-tier candidates are,” said Neal Kwatra, a New York-based Democratic strategist.

Ms. Gillibrand has billed herself as an electable Democrat who won a conservative upstate New York House district in 2006. But that focus has highlighted how her stances then — she had an A-rating from the National Rifle Association and spoke against illegal immigration — contrast with her record now as a progressive senator who voted overwhelmingly against Mr. Trump’s nominees.

Ms. Gillibrand charged in a recent CNN interview that there was some “gender bias” among those who underestimate her. Jennifer Palmieri, who served as Mrs. Clinton’s communications director in 2016, agreed that there had been some biases at play.

“I think that the women candidates have a harder time of breaking through early,” Ms. Palmieri said. “Even though some of the men are fresh faces, we recognize them in a familiar role.”

Ms. Gillibrand is plowing ahead. After fund-raising in New York and Connecticut this weekend, she will campaign in Iowa each of the following three weeks.

“I have faith in the process,” she told reporters in New Hampshire recently, “and the American people.”