Home » Politics » Lavrov: Meeting Truss was like talking to a deaf person 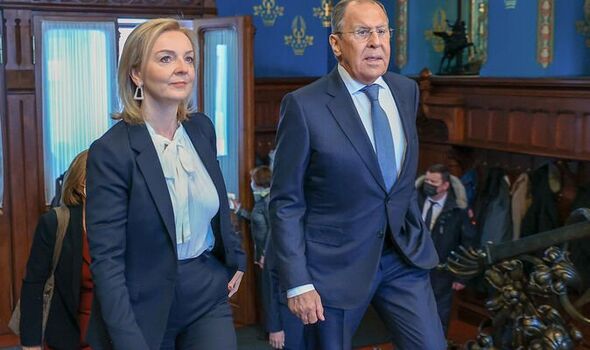 In a distinctly undiplomatic tirade, Sergei Lavrov claimed meeting her was like “talking to a deaf person”.

The Kremlin envoy hit out after Ms Truss delivered an uncompromising warning of the consequences Russia faces if Vladimir Putin continues to menace Ukraine. In the first visit to Moscow by a British foreign secretary for four years, she told Mr Lavrov to abandon “Cold War rhetoric” and follow a diplomatic path to ease the Ukraine crisis.

She added: “There is an alternative route, a diplomatic route that avoids conflict and bloodshed.

“As a fellow member of the UN Security Council I am here to urge Russia to take that path. If these principles are respected, I believe that in today’s talks we can make progress to strengthen security for all.” But speaking afterwards, Mr Lavrov said: “I’m rather disappointed that it was a bit like talking to a deaf person.

“It’s like they’re listening to us but not hearing.” Ms Truss appeared unmoved as she stood at his side during the rant. Mr Lavrov went on to say relations between Moscow and London were at their lowest ebb for “many, many years”.

Meanwhile Russia’s state television news programme mocked Ms Truss for wearing a fur hat during the visit, claiming she was promoting a stereotypical Western view of the country.Another report from the Russian media claimed Mr Lavrov taunted her about her knowledge of Russian geography. He was said to have asked her: “You recognise Russia’s sovereignty over Rostov and Voronezh [disputed regions which Russia claims], don’t you?”

But she stood her ground and told him: “I can’t see any other reason for 100,000 troops stationed on the Ukrainian border apart from threatening Ukraine.

And if Russia is serious about diplomacy, they need to move those troops.”

Nicola Sturgeon scolded for pushing indyref2 ‘SNP does not speak for Scotland!’