The Liberal Democrats leader celebrated the win by assembling several party supporters behind a wall made up of cardboard boxes. Mr Davey appeared in Chesham with a Lib Dem-yellow hammer as he claimed the victory of candidate Sarah Green was the first step towards smashing the “blue wall” in the previously Conservative stronghold. He then proceeded to knock down the cardboard wall in a stunt social media users branded as “cringe.”

One user said: “It knocks a bit of down but ultimately it’s still a wall?”

Another commented: “My guy has won 1 extra seat and he’s out here thinking he’s the PM.”

One social media user ridiculed the move pointing out the stunts had no impact on voters: “Do politicians really think this sort of stunt makes them or their party look good?”

And one user added: “What a ridiculous stunt. It reminds me of Ed Miliband’s tablet of stone.”

JUST IN: Brit expat faces six months in jail after Facebook video showed him on train without mask 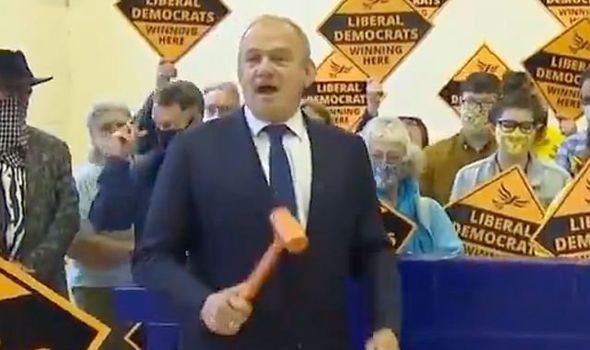 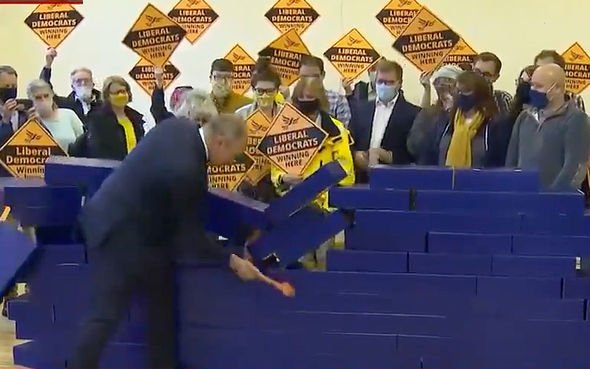 And one ridiculed the reaction to the win: “@EdwardJDavey has lost the plot completely, but don’t worry, Wetherspoons have enough room for their party conference in any of their establishments.”

With the Chesham and Amersham by-election win, the Lib Dems went from 11 MPs to 12.

Introducing his stunt, Mr Davey said: “I mentioned a blue wall and an orange force.

“Know what happens when a really powerful, strong orange force goes against a blue wall? Let me show you.”

Sir Ed claimed that the result demonstrates that the “Blue Wall” of Tory southern seats could be vulnerable after Boris Johnson’s Conservative Party suffered a humiliating defeat in the contest.

Liberal Democrat Sarah Green is the country’s newest MP after winning the Buckinghamshire seat, which had been a Conservative stronghold since its creation in 1974.

The Tories sought to limit the damage, insisting it was difficult for governing parties to win by-elections, but defeated candidate Peter Fleet acknowledged the Conservatives had to rebuild “trust and understanding” with voters.

Policing minister Kit Malthouse branded the defeat “very disappointing” and said that there would have to be a “fairly significant post-match analysis” on what went wrong for the Tories. 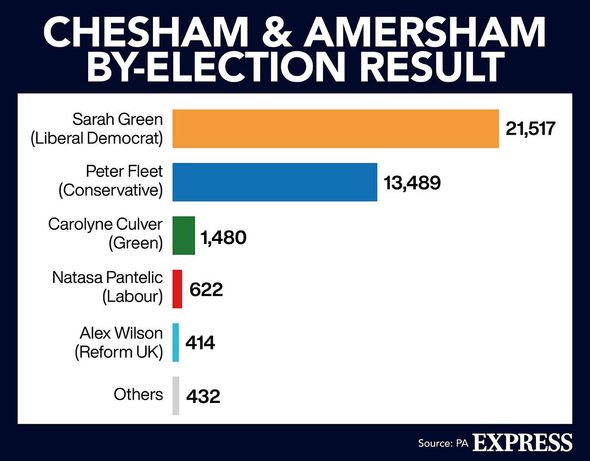 The by-election was triggered by the death of former Cabinet minister Dame Cheryl Gillan, who took the seat with a majority of 16,233 in the 2019 general election – some 55% of the vote.

Polling expert Sir John Curtice told BBC Radio 4’s Today programme that he made it the “worst Labour performance in any by-election” after it took just 1.6% of the vote.

In her acceptance speech, Ms Green said: “Tonight the voice of Chesham and Amersham is unmistakable. Together we have said: ‘Enough is enough, we will be heard, and this Government will listen.’

An Ugly Day in America