The GB News host called for Ms Truss to ” move immediately” with a “code red short term strategy”. The Kiwi broadcaster also slammed the Liberal Democrats for their role in opposing nuclear power during the coalition claiming they were “on the wrong side of history”.

Mr Wootton also blasted the Conservative Party for their “NIMBYISM and paranoia” along with their “net zero” obsession that has seen the UK move away from fossil fuels without any viable green alternative.

He said: “The outgoing Prime Minister did his best today to secure his energy security legacy.

“Just as the country is plunged into a catastrophic winter crisis because of our reliance on bad actors.”

The host continued: “Boris Johnson called out the Conservatives former coalition partner, the Liberal Democrats, whose ex and current leader Nick Clegg and Ed Davey respectively are at least in part responsible for where we find ourselves.” 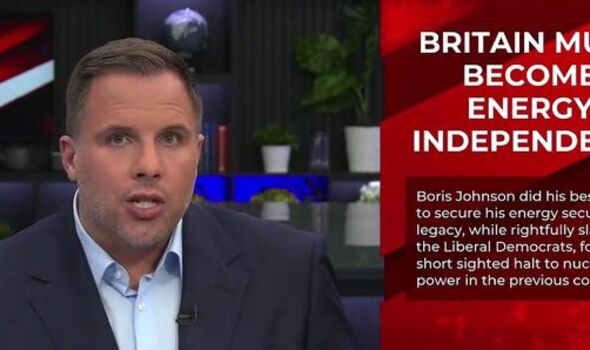 He added: “Let me tell you those two are without doubt on the wrong side of history.”

According to Mr Wootton, the outgoing PM also targeted Labour’s Tony Blair and Gordon Brown for “short term thinking and a failure to invest in nuclear energy that has led to this perilous position”.

However the former Sun journalist added that Mr Johnson only told part of the story and added that “it was the NIMBYISM and paranoia that halted franking for example.

“It’s the net zero obsession that has seen us move too quickly away from fossil fuels without the green energy to back it up.”

Moving on to discuss Britain’s future Prime Minister, Mr Wootton called the inheritance of the energy issues a “poisoned chalice”.

With Liz Truss highly likely to take the role on Tuesday, Wootton warned that “the Foreign Secretary will have to move immediately to secure our energy independence with a code red short term strategy matched by sensible ,medium and long term plans.

“The deranged push to net zero by 2050 needs to be dialled back” as “so many British businesses and families [are] facing financial ruin this winter.”