In the now-distant Republican presidential primaries of 2016, Senator Ted Cruz of Texas handily won the Iowa caucuses. This was determined by a method that has lately come under attack but at the time was considered standard: elementary math.

One of the losers in Iowa, the developer and television personality Donald J. Trump, soon accused Mr. Cruz of electoral theft. He fired off several inflammatory tweets, including this foreshadowing of our current democracy-testing moment: “Based on the fraud committed by Senator Ted Cruz during the Iowa Caucus, either a new election should take place or Cruz results nullified.”

The episode vanished in the tsunami of political vitriol to come during the Trump presidency. Still, it reflects what those who have worked with Mr. Trump say is his modus operandi when trying to slip the humiliating epithet he has so readily applied to others.

“The first thing he calls someone who has wronged him is a loser,” said Jack O’Donnell, who ran an Atlantic City casino for Mr. Trump in the 1980s. “That’s his main attack word. The worst thing in his world would be to be a loser. To avoid being called a loser, he will do or say anything.”

Across his long career, he has spun, cajoled and attacked — in the press, in lawsuits and lately, of course, on Twitter — whenever faced with appearing as anything less than the superlative of the moment: the greatest, the smartest, the healthiest, the best. This has at times required audacious attempts to twist a negative into a positive, often by saying something over and over until it either displaces the truth or exhausts the audience into surrender.

It is a matter of record that Mr. Trump has been a loser in many business ventures (Trump Steaks, anyone?). In fact, his greatest success flowed not from real estate but from the creation of a popular alternate-reality television persona — Donald Trump, master of the boardroom — that he ultimately rode to the White House.

But his famous aversion to the label of loser has now reached its apotheosis.

Since Joseph R. Biden Jr. was declared the winner of the Nov. 3 election — and Mr. Trump therefore declared the loser — the president has repeatedly trafficked in baseless allegations of a fraudulent and corrupt electoral process. What was once considered the quirky trait of a self-involved New York developer has become an international embarrassment, nearly upending the sacred transition of power and leaving the world’s leading democracy — grappling with a deadly pandemic and a teetering economy — with a leader who refuses to concede despite the basic math.

“AND I WON THE ELECTION,” Mr. Trump tweeted last week. “VOTER FRAUD ALL OVER THE COUNTRY.”

“Our case STRONGLY continues, we will keep up the good fight.”

“This was a LANDSLIDE!”

The president’s tweets have succeeded in sowing doubt about the foundational underpinnings of the republic among his many millions of followers. In a recent Reuters/lpsos poll, about half the Republicans questioned believed that Mr. Trump had “rightfully won” re-election, and 68 percent expressed concern that the election was “rigged.”

Such behavior by the president reflects a binary-code approach to life that spares no room for nuance or complication. If a person isn’t a one, then that person is a zero.

“You are either a winner or a loser,” Michael D. Cohen, Mr. Trump’s former lawyer and fixer, said in an interview last week. “Reality is secondary. It is all about perception.” 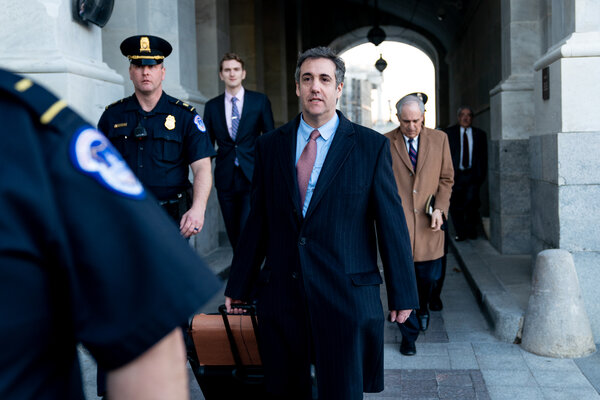 Mr. Cohen, who was convicted in 2018 of tax evasion and campaign finance violations and who has since become a vocal critic of the president, provided several examples in his recent book, “Disloyal: A Memoir.”

Mr. Cohen recounted how, in 2014, CNBC was preparing a poll of the 25 most influential people in the world. Mr. Trump, who initially ranked 187th out of 200, ordered Mr. Cohen to improve his standing.

Mr. Cohen hired someone to assess the options. After that person determined that the poll could be manipulated, $15,000 was spent to buy discreet I.P. addresses through which votes for Mr. Trump could be cast. The scheme worked, with Mr. Trump elevated to ninth place when all the votes were counted.

“Before long, Trump believed he really was rated in the top 10 and was regarded as a profoundly important business figure,” Mr. Cohen wrote.

But CNBC removed Mr. Trump from the list without offering an explanation. The infuriated future president ordered Mr. Cohen to get the network to change course. This failed. He then ordered him to plant a story in the media about “the terrible treatment Trump had received at the hands of CNBC.” This also failed.

Still, Mr. Trump managed to exploit the fake ranking before he was dropped from the list. “He had hundreds of copies made, and he added the poll to the pile of newspaper clippings and magazine profiles of himself that he would give to visitors,” Mr. Cohen wrote.

This fear of being seen as somehow less than the very best is a recurring theme in the mountains of books and articles written about Mr. Trump. Many observers of Trump family history have reflected on the influence of the patriarch, the developer Fred C. Trump, who had his own version of the binary taxonomy of humanity: the strong and the weak.

Mr. Trump flicked at this in his book “Trump: The Art of the Deal,” in which he recalled gluing together the blocks of his younger brother, Robert, effectively ensuring that he would not be outdone in any competition involving — blocks.

“That was the end of Robert’s blocks,” he wrote.

A grown-up iteration of that episode came at a seminal moment in the man’s career: the opening of his Taj Mahal casino in Atlantic City in 1990.

According to Mr. O’Donnell, who was deeply involved in the venture, Mr. Trump pushed to have the casino open prematurely because he feared the shame a delay would bring after promising the world a glitzy, celebrity-packed opening.

The casino wasn’t ready; among other issues, only a quarter of the slot machines were open, leaving the cavernous space quiet and empty. “It was just horrible,” recalled Mr. O’Donnell, who wrote a book about his experiences with the future president. “It didn’t look like a normal casino.”

Privately, Mr. Trump was furious, and blamed his brother Robert for some of the problems. (The younger Trump quit and did not speak to his brother for years.) Publicly, though, Mr. Trump boasted of the wonder that was the Taj Mahal.

Appearing on CNN’s “Larry King Live” in April 1990, Mr. Trump said the only problem with the Taj Mahal’s opening day was too much success. Gamblers were playing the slots with such ferocity that the machines almost burst into flames.

“We had machines that — they were virtually on fire,” Mr. Trump said. “Nobody’s ever seen anything like this.”

The Taj Mahal filed for bankruptcy the following year, which left Mr. Trump’s many lenders and bondholders in the lurch.

Mr. Trump expounded on his worldview in a 2014 interview with the author Michael D’Antonio. “You can be tough and ruthless and all that stuff, and if you lose a lot, nobody’s going to follow you, because you’re looked at as a loser,” he said. “Winning is a very important thing. The most important aspect of leadership is winning. If you have a record of winning, people are going to follow you.”

Mr. Trump has often used the courts to try to crush anyone who might cast doubt on his Olympian standing in wealth and success. A standout in this category is the $5 billion lawsuit he filed against the journalist Timothy L. O’Brien, whose 2005 book, “TrumpNation: The Art of Being the Donald,” argued that Mr. Trump’s net worth was no more than $250 million — that he was not, in other words, a billionaire.

Mr. O’Brien reported that Mr. Trump attributed the chasmic discrepancy to envy. “You can go ahead and speak to guys who have 400 pound wives at home,” Mr. Trump said, “but the guys who really know me know I’m a great builder.”

The lawsuit was dismissed.

Of course, Mr. Trump’s need to be seen as a winner has informed his presidency. The self-declared superlatives cover all bases, from being the “best thing that ever happened to Puerto Rico” to doing the most for Black Americans (with the “possible exception” of Abraham Lincoln). In anticipation of his eventual impeachment this year, Mr. Trump referred to himself as “our greatest of all presidents.”

Perhaps the most famous moment in which this desire bled into public policy came in late 2018, when Mr. Trump used an approaching government shutdown to demand funding for one of his central fixations: a wall along the Mexican border.

After Mr. Trump encouraged his fellow Republicans in Congress to reach a compromise, Senator Mitch McConnell, the majority leader, worked out a deal to avoid a shutdown and temporarily set aside negotiations over security measures, including a border wall.

It appeared that Mr. Trump would sign the deal — that is, until conservative pundits accused the president of caving to Democrats, of breaking his “Build the Wall” promise, of effectively being a loser.

The president reversed course, and so began the longest federal government shutdown in the country’s history — at an estimated cost to the economy of $11 billion, according to the nonpartisan Congressional Budget Office.

After Mr. Trump was sworn in as the 45th president of the United States in January 2017, his administration asserted that the inauguration’s audience was the largest ever, despite all evidence to the contrary. But any suggestion otherwise would have rendered Mr. Trump a loser in some imagined contest about inaugural crowd sizes.

Now, nearly four years later, the citizens have cast their ballots, baseless lawsuits alleging electoral fraud have been dismissed and states have certified the vote. Still, the loser of the 2020 presidential election continues to see crowds that the rest of the country does not.

It ends as it began.