Home » Politics » Meet the man who could decide Boris’s fate 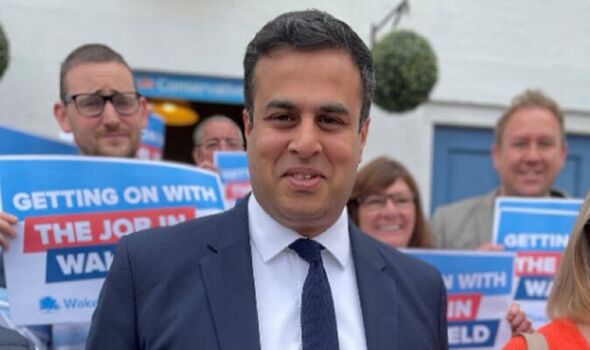 The Conservatives are fighting to hold onto Wakefield following the sentencing of former Tory MP Imran Ahmad Khan for sexually assaulting a 15-year-old boy. A bad loss would trigger claims that the partygate-battered Prime Minister no longer commands the loyalty of former Labour voters who backed the Tories in 2019. But a victory would boost Mr Johnson’s fortunes and strengthen hopes that voters in what was once known as the red wall are sticking with the Conservatives.

If Mr Ahmed, a 42-year-old with a background as an English teacher, is feeling the pressure he hides it well and he does not regard the PM as a liability.

“Boris is our biggest asset,” he told the Sunday Express.

Wakefield turned red in every general election from 1932 until 2019, but Mr Ahmed argues voters are not about to return to Sir Keir Starmer’s party.

Pointing to the example of his father, who came to the UK from Pakistan to work in textile mills, he said: “He switched from Labour years ago because he’d had enough of people telling him how to vote [and] working class people in Wakefield have had enough of being told what to do by the Labour party. They want freedom, they want to deal with their own issues, they want their children to do well.”

When asked if the accounts of Covid-era parties in Downing St had come up in the doorstep, Mr Ahmed said a disabled woman in Horbury told him: “Please stop talking about cakes… I’ve had enough of cakes.”

He also claims that the scandal involving the former MP has not tarred all Conservatives, with people saying: “He was a bad apple in a big tree, which is the Conservative party.”

Mr Ahmed argues that Brexit continues to be an issue for Wakefield voters, with people who voted to leave the EU angry at the suggestion they did not understand the consequences of their decision.

“People feel quite aggrieved by that,” he said. “These are honest Yorkshire people…

“How dare these people tell us we didn’t know what we voted for.”

A local councillor, he stresses his connections to Wakefield at every opportunity.

“My first part-time job was at Morrison’s in the town centre so that’s getting traction with people, and people can relate to the fact that I’m from amongst them,” he said.

Rishi Sunak recently joined him on the campaign trail and Mr Ahmed said the local response demonstrated the popularity of the Chancellor.

“If we’d kept him there for an hour he’d have still been doing selfies,” he said.

Far from seeing 2019 as a one-off victory for the Conservatives in the north, he is determined to play his role in achieving a lasting transformation of the political map.

He said: “We’re building a blue wall here and we’re not going to let Labour knock it down.”

'Where's the beef, ye vegan' – Varadkar says he's 'very much an omnivore' after being heckled by farmers

Election results vs exit poll: How accurate was exit poll? How many seats did Tories win?