ALEXANDRIA, Va. — A member of a notorious cell of four British Islamic State members who tortured Western hostages pleaded guilty on Thursday in a federal courtroom filled with family members of the group’s American victims, some of whom were beheaded for propaganda videos seen around the world.

Alexanda Kotey, 37, was part of an ISIS cell of four Britons called “the Beatles” — a nickname given by their victims because of their accents — and known for their extreme brutality.

The group kidnapped and abused more than two dozen hostages, including the American journalists James Foley and Steven J. Sotloff in 2014, both of whom were beheaded in propaganda videos. Another two Americans were also killed: Peter Kassig and Kayla Mueller.

As families of all four victims sat silently in the courtroom on Thursday, Mr. Kotey recounted calmly and without emotion his crimes and his involvement in the hostage-tasking schemes. He said he knew what would happen to the hostages if their governments did not fulfill the ransom demands, which he had emailed to the families.

Failure to comply, he said, “would ultimately result in either indefinite detention of those foreign captives or their execution.”

He pleaded guilty to multiple charges, including conspiracy to commit hostage taking resulting in death and conspiracy to murder U.S. citizens outside the United States. As part of the plea deal, if Mr. Kotey fulfills his cooperation requirements, he could be sent to Britain after 15 years to complete the remainder of a mandatory life sentence. 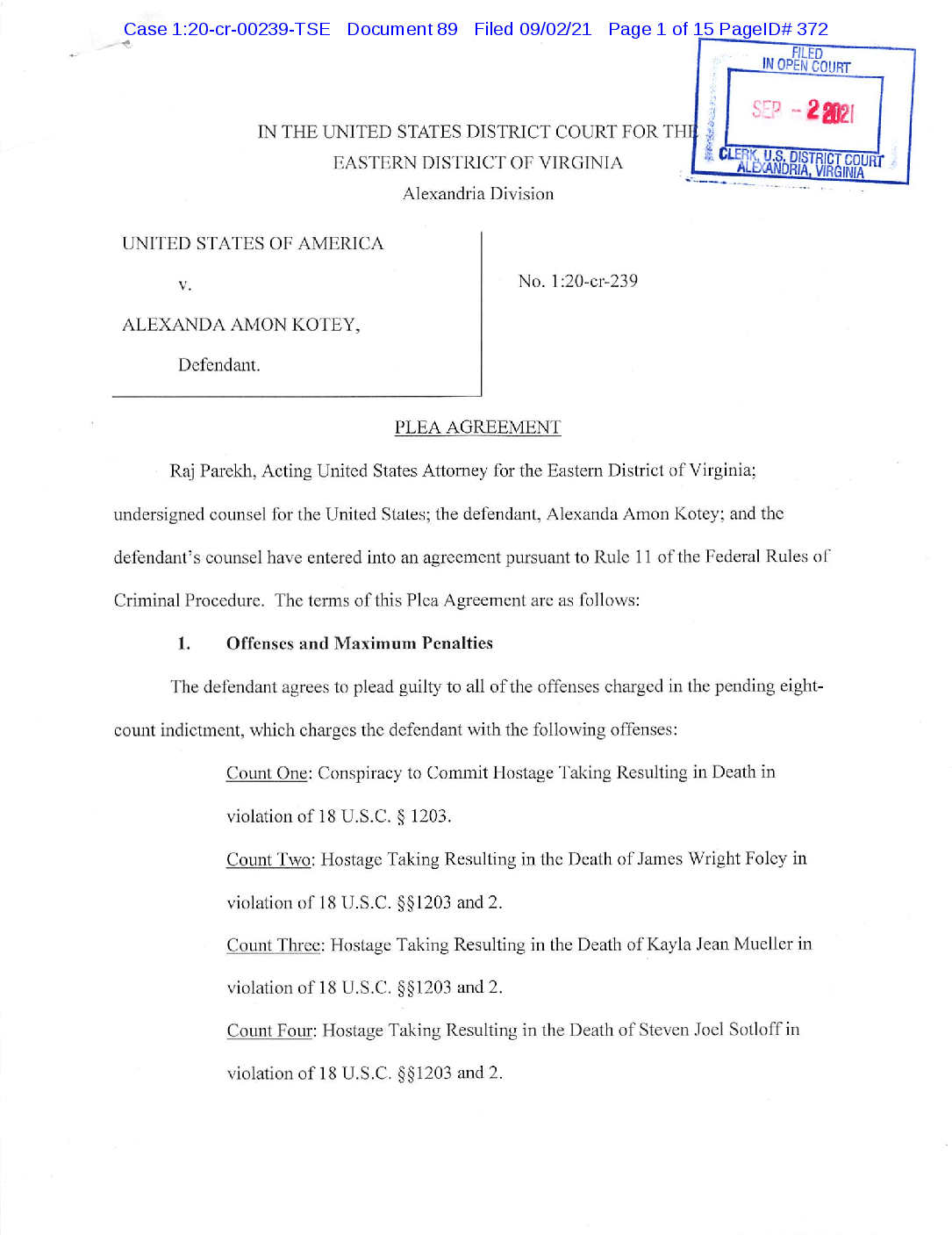 Plea agreement for Alexanda Kotey, who was part of an ISIS cell of four Britons called “the Beatles” that kidnapped dozens of hostages, including journalists James Foley and Steven J. Sotloff, both of whom were beheaded in propaganda videos.

The British government would have to agree to accept Mr. Kotey, who would also have to plead guilty to British crimes. He will also meet with the hostage families if they want to speak with him, under the agreement.

Mr. Kotey was captured in Syria by a Kurdish-backed militia in 2018, along with El Shafee Elsheikh as they tried to flee to Turkey. Mr. Elsheikh, 33, has pleaded not guilty and has not struck a plea deal with prosecutors. Should Mr. Elsheikh decide to take his chances at trial, Mr. Kotey’s plea agreement does not require that he testify against him.

The Trump administration engaged in a lengthy debate over what to do with the two men, weighing options like turning them over to the Iraqis or taking them to the wartime prison at Guantánamo Bay, Cuba.

The families of the dead hostages mounted a powerful public campaign to persuade the Trump administration to bring the pair to the United States to face federal prosecution, weathering years of frustrations as the Justice Department figured out how to proceed.

Last year, after William P. Barr, the attorney general at the time, cleared the way for the British government to provide valuable evidence for the prosecution, the two men were brought to Virginia to face charges before a civilian court.

The families declined to speak during the hearing, which was held on the seventh anniversary of Mr. Sotloff’s death. They intend to speak at Mr. Kotey’s sentencing hearing in March.

After the hearing, Diane Foley, the mother of James Foley, thanked the Justice Department and the F.B.I., adding, “This accountability is essential for anyone who kidnaps or unjustly detains Americans abroad, if our country wishes to ever deter hostage taking.”

The guilty plea also marks a victory for the U.S. attorney’s office in Alexandria, which began investigating the kidnapping of Mr. Foley in November 2012. Prosecutors in the office pushed the case forward despite enormous bureaucratic hurdles while fighting off attempts by counterparts in Manhattan to take over the high-profile matter.

In a statement, Raj Parekh, one of the prosecutors and now the acting U.S. attorney, described the Americans killed as “pillars of courage and kindness on the front lines of a perilous conflict.”

“They risked their lives to shine a light on the darkest corners of the globe and to help others most in need,” he said.

He added that the treatment Mr. Kotey received in the United States stood in “stark contrast to the cruelty, inhumanity and indiscriminate violence touted by the terrorist organization he espoused.” 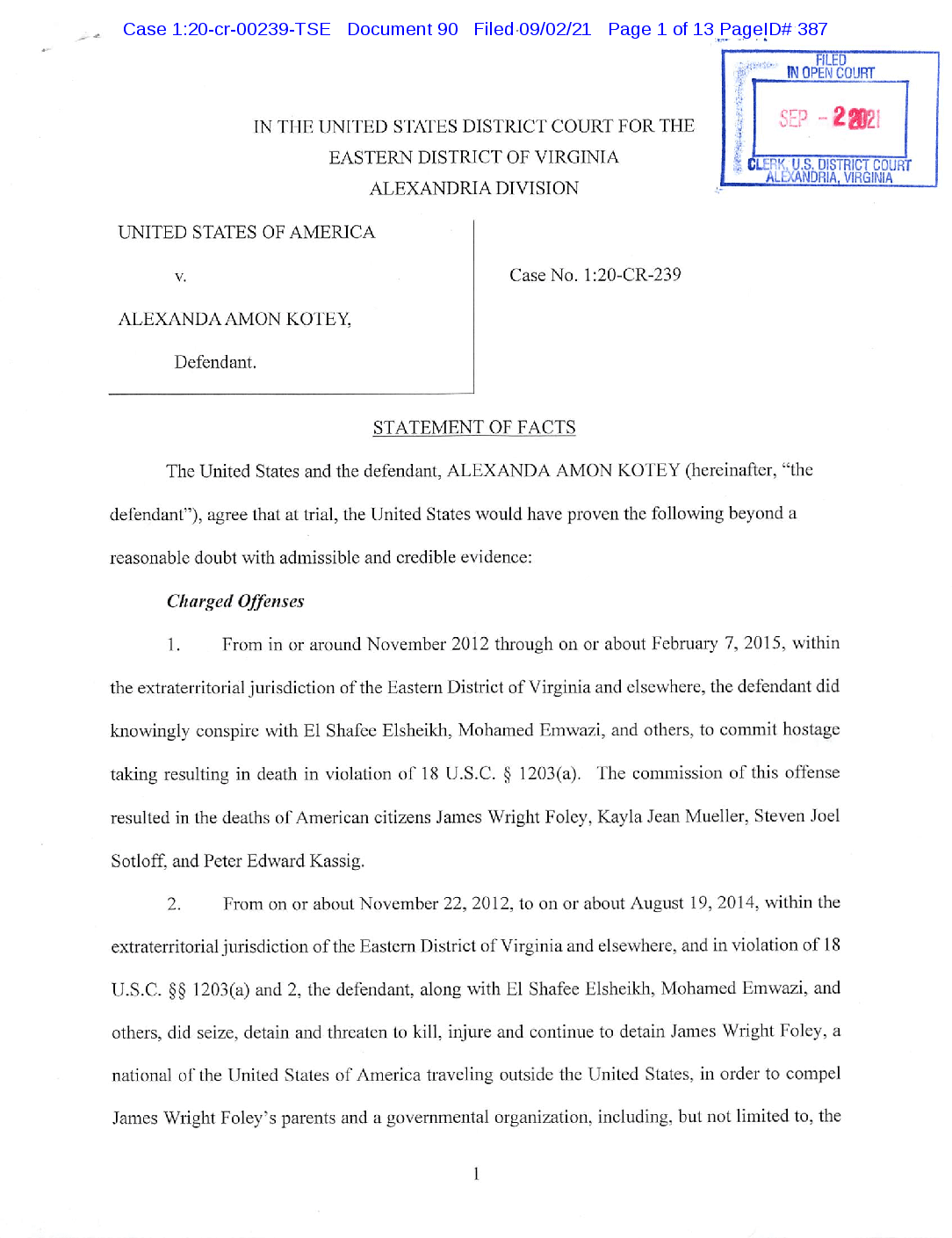 Statement of Facts for Alexanda Kotey, who was part of an ISIS cell of four Britons called “the Beatles” that kidnapped dozens of hostages, including journalists James Foley and Steven J. Sotloff, both of whom were beheaded in propaganda videos.

Their jailers forced the hostages to fight each other and to witness murders, the Justice Department has previously said. In some cases, hostages were released after ransoms were paid. The American hostages met gruesome deaths that rattled the Obama administration and forced the government to revamp the way it dealt with the families of hostages. According to prosecutors, Mr. Kotey said the violence was part of “controlling” the hostages.

Another member of the cell — Mohammed Emwazi, better known as Jihadi John — was killed in an airstrike in 2015 in Syria. Mr. Emwazi was believed to have killed Mr. Foley and Mr. Sotloff, as well as Mr. Kassig, an aid worker. Mr. Kotey said he traveled to Syria in August 2012 with Mr. Emwazi and first joined a Qaeda offshoot, Al-Nusra Front, before switching to ISIS.

The fourth British member of the group, Aine Davis, has been imprisoned in Turkey on terrorism charges. Mr. Kotey’s cooperation would be an important part of any effort to prosecute Mr. Davis if Turkey agreed to extradite him to the United States or Britain.

Mr. Kotey said he was not present when the Americans were beheaded on video but was aware beforehand that ISIS intended to kill them. When he begins providing information to the Americans, the British and other foreign governments, it is not clear if he will be able to provide any reliable details about where the Americans were buried or what happened to Ms. Mueller, a young woman from Arizona who was imprisoned with the other Americans and hostages.

Prosecutors say that Abu Bakr al-Baghdadi, the slain Islamic State leader, turned Ms. Mueller into a sex slave. In early February 2015, the Islamic State announced that Ms. Mueller had died in an airstrike and sent the Mueller family pictures of her lifeless body. She was moved from location to location in the final months of her life.

Trump tried —and failed — to get Justice Department to prosecute Hillary Clinton: reports