WASHINGTON — The conservative commentator Stephen Moore’s chance at confirmation to the Federal Reserve Board teetered on Tuesday after one Republican senator said it was unlikely she would support him and multiple Republican senators began to publicly question whether the problematic favorite of President Trump would have enough votes if nominated.

Senator Joni Ernst, Republican of Iowa, said on Tuesday that she had told the White House she was unlikely to support Mr. Moore, becoming the first senator in her party to be nearing an explicit disavowal of his nomination even before Mr. Trump makes it official.

“Very unlikely that I would support that person,” Ms. Ernst told reporters, having earlier expressed a lack of enthusiasm for Mr. Moore amid criticism for a series of columns and speeches, stretching over two decades, that frequently demeaned women and occasionally trafficked in racism.

Asked if she believed Mr. Moore could garner the necessary votes, Ms. Ernst said, “at this point, no I don’t.”

“At least one or two are not there, so that only leaves one or two left to go,” Mr. Scott said, referring to the four Republican votes needed to sink the potential nomination along party lines.

Mr. Trump has publicly said he planned to nominate Mr. Moore for one of two open seats on the board, but Republican support has declined in recent days. Ms. Ernst, who disclosed this year that she was a survivor of sexual assault, was seen as a critical verdict on Mr. Moore’s chances of Senate approval and a harbinger of further erosion, especially among Republican women. 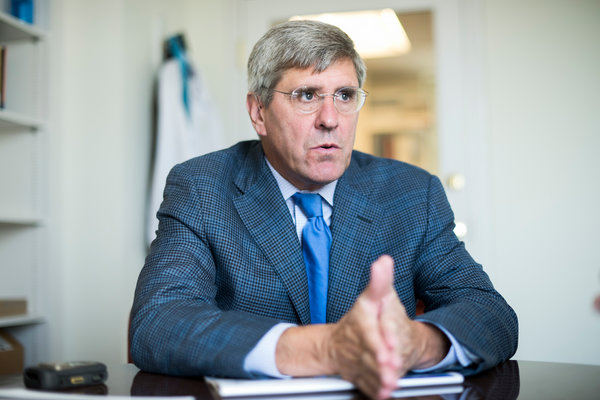 Senator Mitch McConnell of Kentucky, the majority leader, has publicly declined to weigh in until the nomination is official, but he has quietly urged senators who oppose Mr. Moore to reach out directly to the president, as Ms. Ernst did.

Other senators publicly conveyed concerns to reporters on Tuesday and Senator Lindsey Graham, Republican of South Carolina and a staunch ally of the president, said the nomination “would be very problematic.”

“Obviously some of his past writings are of concern,” she said. “Certainly, it appears that he has a lot of personal financial issues as well as troubling writings about women and our role in society, in sports — and also how he views the Federal Reserve.”

Senator Richard C. Shelby, Republican of Alabama and an influential former chairman of the Banking Committee, fretted on Tuesday in a closed-door Republican lunch that the issues bedeviling Mr. Moore could produce a volatile confirmation hearing.

“I hadn’t said I would vote for him or not vote for him,” Mr. Shelby said in a brief interview afterward. “But I raised these because these are troublesome issues that aren’t going to go away.”

Several White House officials privately acknowledged on Tuesday that Mr. Moore would most likely not be nominated — just over a week after Herman Cain, Mr. Trump’s other top pick for the board’s second open seat, withdrew from consideration after accusations of sexual harassment that had stopped his 2012 presidential campaign resurfaced.

Speaking on Sunday on ABC’s “This Week,” Mr. Moore expressed confidence that Republican senators would continue to back him despite the controversies. “I know most of the Republican senators,” he said. “I think they respect my economic expertise and my record.”

But Mr. Moore acknowledged that if he became a political liability to senators like Ms. Ernst, who are up for re-election in 2020, he would withdraw his nomination.

“I don’t think it’s going to come to that,” Mr. Moore said. “I think most fair-minded people think this has been kind of a sleaze campaign against me.”

The president latched onto Mr. Moore for the Fed shortly after reading an opinion column in which Mr. Moore criticized the central bank for raising interest rates last year and called for lower rates to stop what Mr. Moore called “deflation” in commodity prices. But at the time of the announcement, Mr. Moore had not been formally vetted, and Mr. Trump has been waiting for the vetting process to run its course before making a formal nomination.

Mr. Moore, for his part, has tried to keep the debate over his possible nomination focused on economics. But that has been frequently overshadowed by revelations from his past, including a $75,000 federal tax lien filed against him in Maryland and findings by a Virginia judge that he was in contempt of court for not paying more than $330,000 in alimony, child support and other payments to his former wife after their divorce was completed in 2011.

The controversy surrounding Mr. Moore’s impending nomination ballooned after his views, particularly those he shared in opinion pieces he wrote, surfaced this month. In the early 2000s, he said in a television interview that “the male needs to be the breadwinner” in America and blamed the “decline of the family” on the rising economic self-sufficiency of women. He expressed similar sentiments in a 2014 column, warning of possible social consequences if women were to earn more than men. Mr. Moore has also called, in what he says were humor columns, for women to be barred from announcing or officiating men’s college basketball games, unless they were as attractive as the sports reporter Bonnie Bernstein.

“Here’s the rule change I propose,” he wrote. “No more women refs, no women announcers, no women beer vendors, no women anything. There is, of course, an exception to this rule. Women are permitted to participate, if and only if, they look like Bonnie Bernstein.”

In 2016, shortly after Mr. Trump’s election, Mr. Moore paused in a policy speech to tell his audience about a racist illustration that depicted Mr. Trump and former President Barack Obama, which Mr. Moore said bore the headline “First Thing Donald Trump Does as President Is Kick a Black Family Out of Public Housing.”

A swiss escape for Matt and Gina