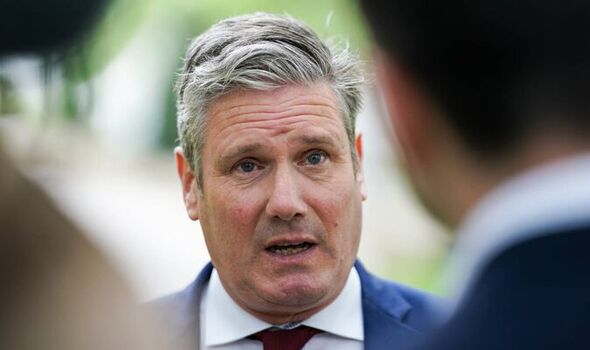 The Labour leader is facing investigation for multiple failures to register on time gifts from football clubs and book royalties worth thousands of pounds.

Sir Keir, nicknamed Mr Rules by colleagues, insisted there was no issue despite apologising for “administrative errors”.

He is still awaiting the outcome of an inquiry by Durham Police into claims he broke lockdown rules by having a beer and curry with staff.

A Tory source said: “The so-called Mr Rules just can’t stop breaking them. Starmer is holier-than-thou until it comes to sinking lockdown beers and freebies to football. They should call him Mr Hypocrite instead.”

Kathryn Stone, Parliamentary Commissioner for Standards, is looking at accusations he broke two sections of the MPs’ code. It says they must declare an interest within 28 days which might be considered to influence them.

During a by-election campaign visit to Wakefield, West Yorks, yesterday, Sir Keir said: “My office is dealing with it and will reply in due course.”

Asked if he was sure he has done nothing wrong, the former Director of Public Prosecutions said: “Absolutely confident, there’s no problem here.”

Sir Keir got an £18,450 advance from Harper Collins in April for a book he is writing. It appeared to have been declared a day late. Royalties for two legal books published before he became an MP were also delayed.

Sir Keir had a directors’ box at Crystal Palace worth £720 when they beat his club Arsenal 3-0 on April 4, registered on May 5.

He received four tickets for Watford v Arsenal, worth £1,416, for the March 6 match with the gift registered on May 6.

Just Eat tickets for staff for a festival and awards exceeded the £300 limit for registration on October 29 but were not declared until December 23.

Sir Keir’s spokesman said he was “happy to provide” data requested by Ms Stone and “he has apologised for administrative errors” in late declarations.