As more and more surrounding states have legalized some form of medical marijuana, advocates in Nebraska say it’s time for their state to accept the reality and embrace the medicinal use of cannabis. And they want it written into the State Constitution.

Two lawmakers started a petition drive last week hoping to build on legalization efforts elsewhere, including other deep red bastions like Utah and North Dakota, and put a Constitutional Amendment on medical marijuana on the state ballot in 2020.

Its backers describe their goal as a matter of both improving public health and accepting reality, saying it is absurd to ban medical cannabis when the District of Columbia and 32 states have legalized it in some form.

Three of Nebraska’s neighbors are among those states: Colorado, where a booming cannabis business has created an estimated 40,000 jobs, Iowa and Missouri.

“We are quickly being surrounded by states that have sensible laws on medical marijuana, and we do not,” said State Senator Adam Morfeld, a Democrat who began the petition drive along with State Senator Anna Wishart, also a Democrat. “A lot of Nebraskans are looking to other states — to Utah and Missouri — and saying, ‘Wow, these are also conservative states and they have much more reasonable policies about this than we do.’”

The petitioners, organized under the name Nebraskans for Sensible Marijuana Laws, are setting their sights high: They want to present voters with a ballot initiative that would amend the State Constitution to ensure a right to access medical marijuana. They will need to gather signatures from 10 percent of registered voters, including 5 percent of the voters in 38 of the state’s 93 counties.

Nebraska has tried to legalize medical marijuana before. The State Legislature, which consists of one chamber and is nonpartisan but is dominated by Republicans, debated the issue in 2016 and 2017. Each time, the measures failed to gain enough votes to overcome either a filibuster or the prospect of a veto from Gov. Pete Ricketts, a Republican.

He and the attorney general, Doug Peterson, both oppose medical marijuana. In a statement on Monday, Mr. Peterson said, “If there is medical evidence to support the use of cannabis for treatment purposes, then the appropriate method is to seek F.D.A. approval.”

“Any efforts to advance medical marijuana must be led by medical science and not the industry or politicians,” he added. 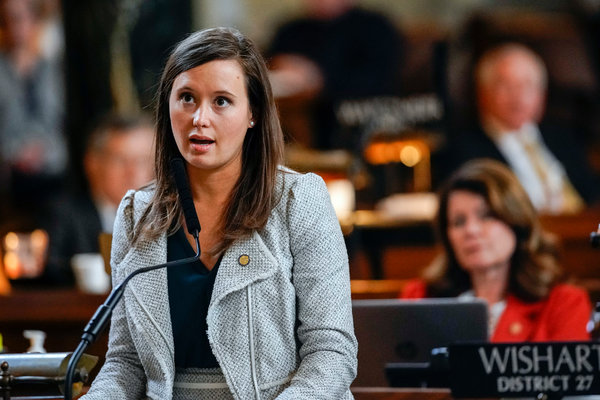 Governor Ricketts did not respond to a request for comment on Monday, but has for many years maintained a position similar to that of Mr. Peterson. In a column posted online before the 2016 statehouse debate, he called marijuana “a dangerous drug” and said any form of legalization could be a slippery slope.

“We must be cautious before we follow the lead of other states,” he wrote. “Legalization of marijuana for any purpose has proven to be a risky proposition because the controls placed on its use in other states have fallen short.”

Matthew Schweich, the deputy director of the Marijuana Policy Project, which has backed the Nebraska effort, said advocates there could learn from successful medical marijuana efforts in conservative states like Utah.

“You’ve got to explain to voters that medical marijuana is a question of compassion and of allowing sick and suffering people to treat their conditions without being treated as criminals,” said Mr. Schweich, who added that his organization was considering 2020 medical marijuana campaigns in Idaho and Mississippi.

Ms. Wishart, who sponsored the legislation in 2016, said she would introduce another medical marijuana bill next year “to give the Legislature one more chance,” but she said she was “not that optimistic.” But she pointed to a recent history of progressive policy victories at the ballot box, including Medicaid expansion in November and a minimum-wage increase in 2014, as a reason to be hopeful.

“I think this is very achievable,” she said. “We are starting to get a history in Nebraska of passing ballot initiatives when the Legislature is unable to move forward on an issue.”

In addition to collecting signatures, Ms. Wishart said Nebraskans for Sensible Marijuana Laws would fund-raise, conduct public education and polling and draft language for a proposed constitutional amendment. In an email, she said they would also be “researching and dialoguing with Nebraskans over the next month about other marijuana reforms including full legalization.”

Mr. Morfeld said the medical marijuana gap between Nebraska and its neighbors forced residents to travel for cannabis treatments or products, exposing them to potential legal danger if they are caught crossing state lines with the drug. He said it could also highlight a persistent dynamic of young people and others moving out of state.

“If I were suffering, why wouldn’t I just move to Council Bluffs in Iowa, across the river from Omaha, to get the treatment I need and want?” he said.