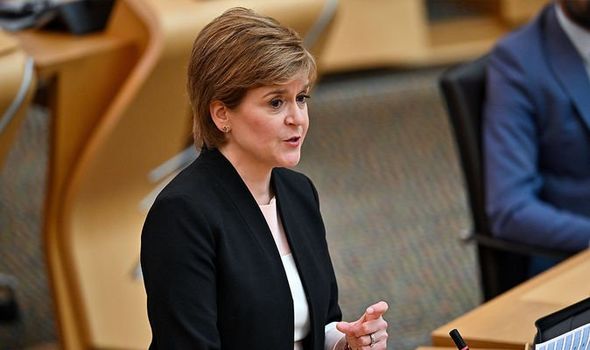 A final agreement is close to being signed, with plans to put the deal to the First Minister’s Cabinet as early as next week, The Guardian has reported. The formal deal, which would not quite be a full coalition similar to that agreed between the Conservatives and Liberal Democrats in 2010, would give the SNP and Greens a clear majority in the Scottish Parliament.  Both parties have been holding talks since shortly after the Scottish elections on May 6, which saw the ruling SNP fall agonisingly short by one seat of an overall majority in Holyrood.

An agreement would therefore go a long way to formalising the 72 pro-independence MSP majority in Parliament – seven more than the 65 needed.

But Ms Sturgeon’s political rivals have launched a scathing attack over plans for the SNP-Green coalition.

In their manifesto in the lead-up to the Scottish elections in May, the Greens pledged to “phase out” oil and gas in the North Sea.

However, they have so far just committed to a transition, which would see workers in the industry retrained in other lines of work.

Scottish Conservative Shadow Secretary for Net Zero, Energy and Transport, Liam Kerr raged: “The prospect of an SNP-Green coalition of chaos is terrifying for the 100,000 workers and their families in our oil and gas industry.

“The SNP Government are working hand-in-hand with a party that’s happy to see thousands of hardworking families lose their jobs to suit their priorities.

“They care more about their separatist, ideological grievances than Scotland’s jobs and our wider economy and recovery.

“The UK Government have committed £16 billion to the North Sea to support the sector into transitioning towards using cleaner and greener technologies. That will help us progress towards achieving a net zero society and support our economic recovery.

“The Scottish Conservatives will continue to stand up for vital jobs and livelihoods while doing everything possible to prevent this destructive SNP-Green agenda.”

Scottish Labour leader Anas Sarwar fumed: “This coalition isn’t a surprise it is just formalising a long standing reality where Nicola Sturgeon and the SNP hammer our public services with cuts, and the Greens nod along.

“From voting against pay rises for care workers, failing to reform the council tax, and tripling cuts to Scottish councils, this confirms the long held suspicion that the Scottish Greens are a just a branch office of the SNP.”

Scottish Liberal Democrat interim leader Alistair Carmichael said: “If a deal is reached, this will simply be the formalisation of a nationalist alliance that has already cut tens of millions from council budgets and spared SNP minister’s blushes over the appalling handling of education.

“Make no mistake the Greens would be responsible for each and every failing of this tired Government.

“To tackle the climate emergency will require cooperation across the UK, Europe and beyond not a retreat to narrow nationalism.”

While it is presently unclear what a final deal with the Greens will look like, Ms Sturgeon did not previously rule out a cooperation pact of some sort.

She told MSPs in May: “As we embark on this process, we are setting no limits on our ambition.

“So in that vein let me be clear that while this is not a guaranteed or pre-agreed outcome, it is not inconceivable that a co-operation agreement could lead in future to a Green minister or ministers being part of this Government.

“The key point for today is that we are both agreeing to come out of our comfort zones to find new ways of working for the common good.”