Nigel Farage’s Brexit Party has come under increasing pressure to reduce the number of candidates it’s fielding in the general election to prevent splitting the Leave vote and hurting the Conservatives. Mr Farage will hold a press conference in Hartlepool at 12.05pm on Monday, with speculation growing he is about to bow to the pressure.

Mr Farage tweeted he would use this press conference to speak about his party’s “general election strategy”.

It comes as Arron Banks, co-founder of the Leave.EU campaign and, along with Mr Farage, one of the self-styled “bad boys of Brexit”, threatened to jeopardise the Brexit Party campaign.

In what would have been a major blow for Mr Farage, Mr Banks told residents of three constituencies in Stoke-on-Trent to vote Tory.

Leave.EU has said that unless the Brexit Party stands down in most constituencies before Friday, it will release a tactical voting app showing Brexiteers who they should back in every seat. 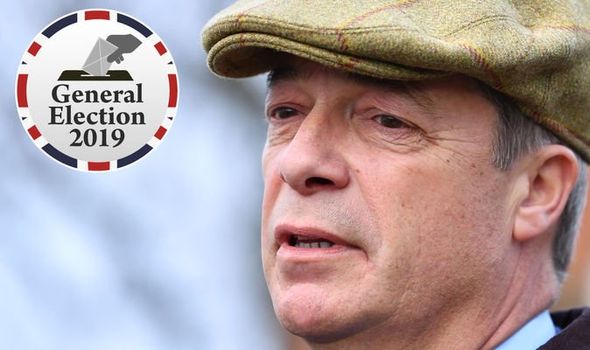 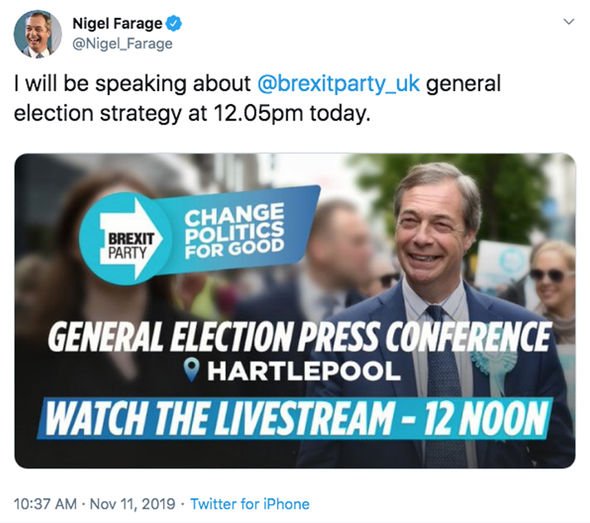 A spokesman for Leave.EU said: “This app is ‘back Brexit, back Boris’.

“We will tell Brexiteers the right candidates to back for Brexit.

“If that is against the Brexit Party then so be it. We have to get Boris a majority so we can get Brexit done.”

Leave.EU has been openly critical of Mr Farage’s tactics ahead of the general election, accusing him of risking Brexit by splitting the Leave vote. 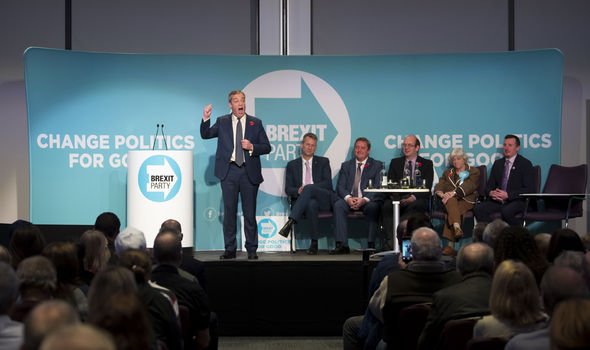 Mr Farage has come under criticism from the Whitehall sources too, with one former No 10 adviser compared Mr Farage to a character from The Lord of the Rings keeping the “One Ring” to himself.

Nick Timothy wrote in the Telegraph that Mr Farage “has tragically turned into the Frodo Baggins of Brexit.”

He wrote: “Mr Farage has spent a lifetime campaigning to get Britain out of the European Union.

“He overcame incredible odds to become one of the few who can say they made Brexit happen.

“But now Britain has the opportunity to leave the EU, he risks upending all he has worked to achieve.”

If Mr Farage declines to bow to threats, the Leave.EU app will pull data from the 2017 and 2015 elections, and this year’s European elections, for each party.

The group says that it will also use information on voting intentions submitted to the party online by users.

It is thought the Leave.EU app could support Brexit Party candidates in about 40 seats where the Conservatives are “no hopers” and the only alternative would be a Labour victory.

A Brexit Party source rejected the suggestion that it would split the pro-Brexit vote, saying that Mr Johnson’s deal was “not Brexit”. 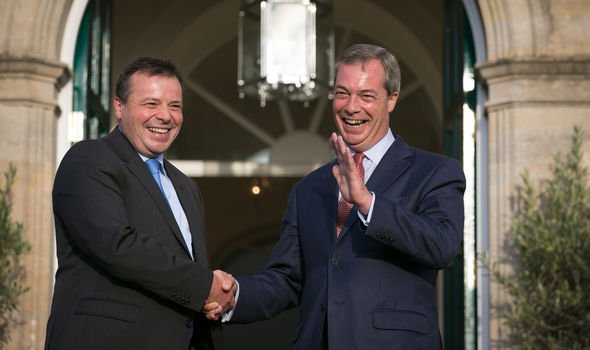 The data will be updated every other day from Friday, meaning recommendations on which candidate to back might change as the election campaign progresses.

Leave.EU says it is fully compliant with strict rules surrounding the use of data, following questions in the past.

A former Brexit Party candidate has also called on the party not to split the Leave vote.

Peter Udale, who stood down last week as the Brexit Party’s candidate for the Cotswolds, said: “A Corbyn-led government could irreversibly change the face of Britain.

“The Brexit Party must stand down candidates wherever they risk making Corbyn our prime minister…Nigel Farage must put country before party.”