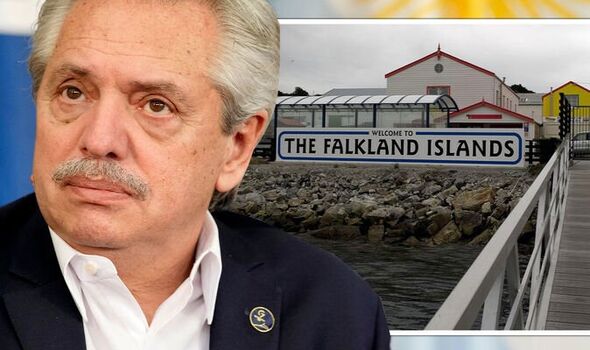 Alberto Fernandez raised the sovereignty of the South Atlantic archipelago in face to face with the Prime Minister. Travelling to Madrid for the Nato summit, Mr Johnson admitted he was disappointed the issue was raised at a time when the UK has just marked the 40th anniversary of the liberation of the islands.

“I think my understanding is that our friends in the Argentinian delegation have presented this as being a more acrimonious conversation than it was. It was frank, but it seemed to me to be friendly.

“I just said that it had been 40 years ago since the UK had at a cost of the sacrifice of many lives vindicated the principle that the Falkland Islanders should have the right to determine their future under basic democratic principles and had the right to be British. That as far as I was concerned was the end of the matter.”

The two leaders met on the margins of the G7 summit in Germany on Monday.

Mr Johnson said: “Normally speaking in my relations with Argentinian leaders, we have a very simple formula, which is that we accept there’s a lot that we can work on together and the UK and Argentina actually have a big common agenda of things we like to discuss whether it’s the oceans, tackling climate change, increasing our trade, there’s a huge amount that we that we do together.

“There is one particular issue where we simply do not have compatible opinions.

“I made the point that we were spending a lot of our time talking about Ukraine, where the principle at stake was the right of sovereign, independent people to determine their future.

“That was the principle that was at stake in the Falklands. It had been decided decisively over many, many, many years and I still see no reason for us to engage in a substantive discussion about it.”

Argentina claims it inherited the islands from Spain in the 1800s and invaded in April 1982.