WASHINGTON — The last Supreme Court term ended with a constitutional cliffhanger. In a pair of cases that had the potential to reshape American democracy, the justices refused to decide whether election maps can be so warped by politics that they violate the Constitution.

Instead, the court said, in essence, “Come back next term.”

Next week, a year after the court last heard arguments over whether extreme partisan gerrymandering can cross a constitutional line, the justices will again consider the question.

But something fundamental has changed. Justice Anthony M. Kennedy, whose vote was seen as crucial to any decision putting limits on partisan gerrymandering, retired last summer.

In Supreme Court litigation, as in so many things, timing is everything. Had Justice Kennedy stayed on the court, there are good reasons to think he would have been particularly receptive to the plaintiffs’ arguments in one of next week’s cases.

If one thing was clear from his questions last term, Justice Kennedy thought that overt efforts to favor candidates from one political party were deeply problematic.

In the first case, from Wisconsin, he asked whether a state could enact a law explicitly requiring election maps to favor one party. Lawyers for state officials said such a law would violate the Constitution.

In the second case, from Maryland, Justice Kennedy asked pretty much the same question, adding the prescient phrase “partisan advantage.”

“Suppose the Maryland Constitution had a provision that required that partisan advantage for one party be the predominant consideration in any districting,” he said. “Lawful or not?”

He plainly thought the answer was “not.” A lawyer for the state seemed to agree.

On March 26, the court will consider a case from North Carolina that looks a lot like the hypothetical one Justice Kennedy had asked about. Indeed, the challenged plan included a criterion called “partisan advantage.”

“I think electing Republicans is better than electing Democrats,” he said. “So I drew this map to help foster what I think is better for the country.” 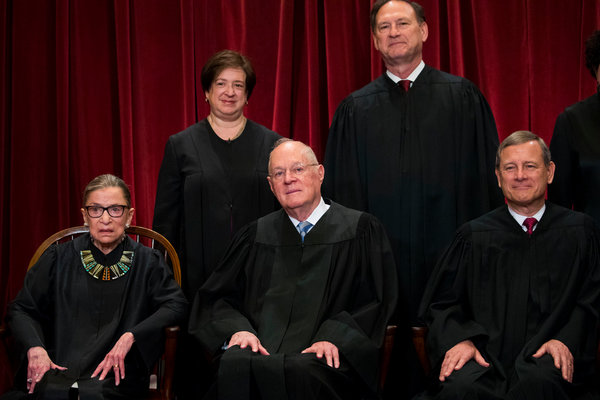 In 2018, the statewide vote was about evenly divided, but Democrats again secured only three seats. (Following evidence of election fraud, one seat remains open.)

The Supreme Court has never struck down a voting map on the grounds that it was drawn to amplify the power of the political party in control of the state legislature. But Justice Kennedy, in his questions last term and in a 2004 concurring opinion, left the door open to the possibility that some kinds of political gamesmanship may be too extreme.

In their Supreme Court brief, North Carolina lawmakers asked the court to close that door. The Constitution, they wrote, contemplated a role for politics in redistricting by assigning the task to state legislatures, adding that federal courts have no role to play in supervising the legislatures’ judgments.

“The time has come,” they wrote, “for this court to make clear that the Constitution does not provide courts with the tools or the responsibility to say how much partisan motivation is too much.”

The lawmakers warned the Supreme Court that its authority would be threatened if it were seen to be making political choices. That was an echo of comments from Chief Justice John G. Roberts Jr. in the argument in the Wisconsin case.

“We will have to decide in every case whether the Democrats win or the Republicans win,” he said, adding, “And that is going to cause very serious harm to the status and integrity of the decisions of this court in the eyes of the country.”

Partisan gerrymandering is almost as old as the nation, and both parties have used it. Indeed, in a companion case from Maryland that will be argued the same day as the one from North Carolina, Republican voters are challenging a district drawn by Democratic lawmakers.

But in recent years, as Republicans captured state legislatures around the country, they have been the primary architects and beneficiaries of partisan gerrymandering. Using increasingly sophisticated software, they have drawn voting districts to favor their party’s candidates.

Justice Kennedy, writing in 2004, said he had not been able to find “a manageable standard” for separating ordinary politics from unconstitutional gerrymandering. But he said he did know one thing.

“If a state passed an enactment that declared ‘All future apportionment shall be drawn so as most to burden Party X’s rights to fair and effective representation, though still in accord with one-person, one-vote principles,’” he wrote, “we would surely conclude the Constitution had been violated.”

To hear the challengers tell it, that is what happened in North Carolina. But they will be making their arguments to a new audience, one that may not be as receptive as the court that included Justice Kennedy.

Kevin Maguire: Inside the Newcastle food bank made famous by ‘I, Daniel Blake’