WASHINGTON — The top two Democrats in Congress called on Sunday for President Trump to defy the National Rifle Association and get behind legislation, already passed by the House but blocked in the Senate, to expand background checks to nearly all gun buyers.

With gun control high on Congress’s agenda as lawmakers return to Washington this week after their August recess, Speaker Nancy Pelosi and Senator Chuck Schumer, the Democratic leader, sent a joint letter to the president, telling him that his “urgent, personal intervention is needed to stem the endless massacres of our fellow Americans by gunfire” and that he had a “historic opportunity to save lives.”

The letter, which Ms. Pelosi and Mr. Schumer intend to follow with a news conference on Monday, is part of what Democrats say will be an all-out push for gun safety legislation this fall. In it, they asked Mr. Trump to express his support for H.R. 8, the bill passed by the House that requires background checks for private gun sales, including those at gun shows and over the internet. Senator Mitch McConnell, the Republican leader, has so far refused to take up the measure, which is strongly opposed by the N.R.A.

“We implore you to seize this moment when your leadership and influence over Republicans in Congress on the issue of guns is so critical,” they wrote in the letter, which was obtained by The New York Times. “Please do not squander it by acceding to N.R.A.-backed proposals or other weak ideas that will do nothing to stop the continuing, horrific spread of gun violence and may, in some cases, actually make our communities less safe.”

The letter is an effort to put Mr. Trump and Mr. McConnell into a box on gun control legislation — and, perhaps, to ensure that Republicans and the president take the blame if nothing gets signed into law. The president initially expressed support in early August for “very meaningful background checks” after a pair of deadly mass shootings in Texas and Ohio but stopped short of endorsing the bill passed by the House. His stance, however, appeared to have softened — as has been the case with Mr. Trump in the past — after talks with gun rights advocates.

Mr. McConnell has said he expected the Senate to debate gun control sometime after lawmakers returned to Washington on Monday. But he has also said repeatedly that he would not put legislation on the floor for a vote unless Mr. Trump was willing to sign it — a point that another member of the Republican leadership, Senator Roy Blunt of Missouri, echoed on Sunday.

“We are not going to vote on bills on the Senate floor that the president is not willing to sign,” Mr. Blunt said on NBC’s “Meet the Press.” “The president needs to step up here and set some guidelines for what he would do.”

The letter comes as the debate over gun control — one of the most contentious and intractable issues in American politics — is changing rapidly in Washington. So far this year in the United States, firearms have been involved in at least 38 mass killings, which the Justice Department defines as three or more fatalities in a single episode, excluding the gunman. In August alone, 53 people in the United States died in mass killings by firearms.

The top two Democrats in Congress called on the president to defy the N.R.A. and expand background checks to nearly all gun buyers. 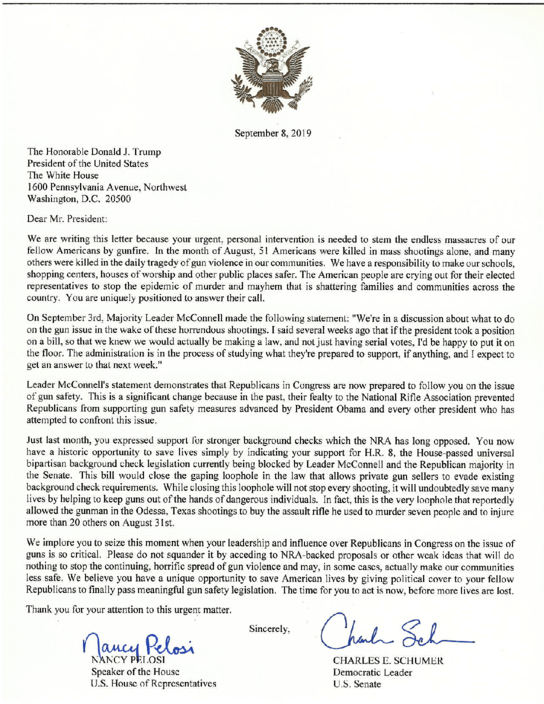 The shift is evident in Congress and also on the presidential campaign trail; gone are the days when Democrats like John Kerry, the 2004 presidential nominee, felt compelled to have themselves photographed going hunting. (The White House issued such a photograph of President Barack Obama in 2013.) Today’s Democratic candidates are falling over one another to see who can issue the most aggressive gun safety platforms.

Yet some Republicans, especially in states where there have been mass shootings, are also calling for gun safety legislation. In Texas, where there were multiple deadly shootings in August, Lt. Gov. Dan Patrick, a staunch proponent of gun rights, called on Friday for background checks on private gun sales.

In Washington, the August shootings prompted Republicans to quickly rally around another type of gun control legislation: so-called red flag laws, which make it easier for law enforcement to take guns away from people deemed dangerous by a judge. In the Senate, Lindsey Graham, Republican of South Carolina, and Richard Blumenthal, Democrat of Connecticut, are sponsoring a red flag bill.

The massacres also revived talk of the bipartisan background checks bill known as the Manchin-Toomey bill, after its Senate sponsors, Joe Manchin III, Democrat of West Virginia, and Patrick J. Toomey, Republican of Pennsylvania. But the legislation, which includes exemptions for gun transfers for family members and friends, is not as expansive as the House bill, and many Republicans remain uncomfortable with it. It fell to a Senate filibuster in 2013.

At the direction of Mr. Trump, top White House officials have been engaged in bipartisan talks with lawmakers, including Mr. Manchin and Mr. Toomey, about what kind of gun legislation the president might be willing to support — and what Democrats would agree to.

An administration official participating in the talks, who spoke on the condition of anonymity because he was not authorized to disclose internal deliberations, said after a recent deadly shooting spree in West Texas that they were making “a lot of progress in good faith,” but had reached no agreement. On Sunday, the official said the status of the talks was unchanged.

Mr. McConnell, meanwhile, has directed three top committee chairmen in the Senate — Mr. Graham of the Judiciary Committee, Lamar Alexander of the health committee and Roger Wicker of the commerce committee — to engage in “bipartisan discussions of potential solutions to help protect our communities without infringing on Americans’ constitutional rights.”

Passing gun legislation has long been one of the most intractable issues in Washington. Democrats typically talk about gun restrictions — many are now calling for an assault weapons ban, which stands virtually no chance of passing the Senate — while Republicans typically talk about the issue of mental health in relation to gun control.

During his “Meet the Press” interview on Sunday, Mr. Blunt expressed concern that the current debate would end in a stalemate, just as it did after the 2012 massacre at Sandy Hook Elementary School in Newtown, Conn.

“I’m afraid what’s going to happen here is what always happens — is we take this silly, ‘If we don’t get everything, we won’t do anything,’” he said, “and fail to do the things we could do, with more early mental health help.”