WASHINGTON — At 8 a.m. on Friday, Vice President Mike Pence will roll up his sleeve to receive the coronavirus vaccine, a televised symbol of reassurance for vaccine skeptics worried about its dangers. President-elect Joseph R. Biden Jr. is scheduled to receive his injection on camera next week.

Notably absent from any planned public proceedings is President Trump, who has said relatively little about the vaccine that may be seen as a singular achievement, and he has made it clear that he is not scheduled to take it himself.

The vaccine may provide a ray of hope at a time when the surging coronavirus is regularly killing around 3,000 Americans a day. But the message on the virus from the Trump administration’s highest officials remains muddled and often contradictory as they continue to toggle between facing reality and trying to dictate an alternate one.

Mr. Pence, who will receive his first vaccine shot and encourage Americans to follow suit almost six months to the day after he published an op-ed in The Wall Street Journal titled “There Isn’t a Coronavirus ‘Second Wave,’” hosted a holiday party at his residence this week where guests mingled in an outdoor tent and posed for pictures without masks, according to attendees.

Secretary of State Mike Pompeo was forced into quarantine after being exposed to someone who had tested positive for the coronavirus after hosting a string of large, indoor holiday parties at the State Department and attending a private party Saturday to watch the annual Army-Navy football game. Only one unofficial adviser in the president’s circle has performed a public mea culpa for his earlier disregard of public health guidelines: Chris Christie, the former New Jersey governor, who on Wednesday released a television ad urging Americans who do not wear a mask to learn from his own harrowing medical experience and wear one.

The president, who recovered from his own bout with the virus after being treated with experimental drugs at Walter Reed National Military Medical Center, is described by aides and allies as preoccupied with the election results he still refuses to accept, and has shown no interest in participating in any kind of public health message.

Even in private conversations, they said, Mr. Trump rarely even brings up the vaccine that the White House press secretary, Kayleigh McEnany, described this week as a “medical miracle” that the president, “as the innovator,” deserved credit for. 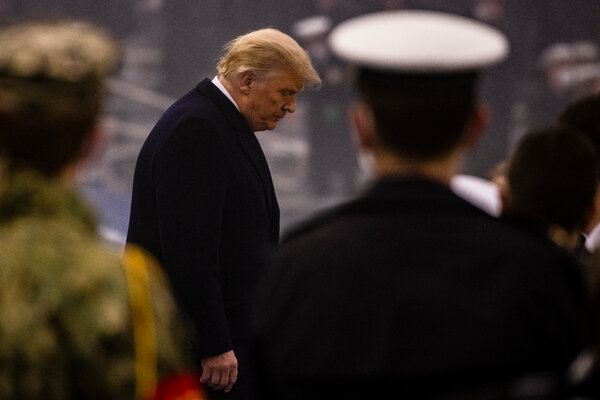 Instead, Mr. Trump has been focused on his efforts to overturn the election results and consumed by his anger at Senator Mitch McConnell, the majority leader, who this week finally congratulated Mr. Biden on his victory and said that “the Electoral College has spoken.” And he remains frustrated that the vaccine was not available before Election Day, people who have spoken to him said.

But the president is also aware that a large part of his political base is made up of supporters who refuse to wear masks and so-called anti-vaxxers suspicious of the Covid-19 vaccine. After months of positioning himself in opposition to public health experts, people familiar with his thinking said, Mr. Trump feels on some level as if he does not want to be seen as caving in the end to the advice of the same people he has disparaged.

What to Expect From the Democratic Debate Lineups

Voice of the Mirror: We all want Harry Lee to get a new heart for Christmas