The Prime Minister is set to come under scrutiny for his coronavirus roadmap to lift lockdown restrictions. The masterplan to get England back to normal was unveiled by the Government on Monday.

Mr Johnson is facing pressure from his backbenchers over the plan, with some Tory MPs demanding he go faster in unlocking society. He is likely to face intense questioning from his own MPs over the plan as well as his review into whether to introduce vaccine passports

Sir Keir also likely to focus on the roadmap in his questioning of the Prime Minister.

When the Labour leader first responded to the announcement on Monday, he had been aware of the broad outline of the plan for only a matter of hours.

Now he’s had time to digest the Government’s 60-page document he is likely to quiz Mr Johnson on the details. 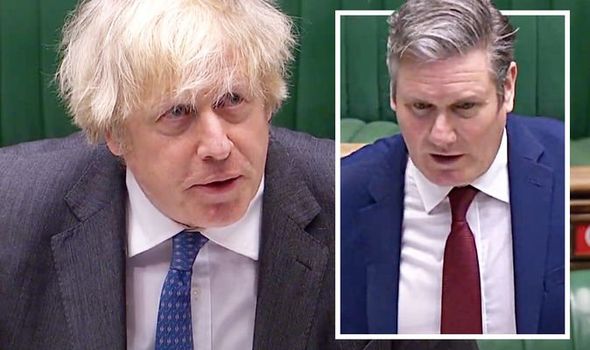 Less than half an hour now until the Prime Minister enters the Commons for his weekly sparing match with Sir Keir Starmer.

With the vaccine rollout going so well and a roadmap to normality published on Monday, there are plenty of areas for Mr Johnson to boast about to MPs.

But the  60-page roadmap means there is also plenty of detail to be on top of, with Sir Keir able to scrutinise specific sections of the plan.

11.09am update: Plan for schools unveiled ahead of PMQs

This morning Gavin Williamson outlined the Government’s plan for returning pupils to schools ahead of the PMQs.

Education has been an area Sir Keir Starmer has focused on several times in PMQs since the start of the pandemic.

Mr Williamson announced secondary schools are to be given funding to run summer schools under plans to help children in England catch up on lost learning.

Summer classes will be introduced for pupils who need it the most, such as incoming Year 7 pupils, while one-to-one and small group tutoring schemes will be expanded.