WASHINGTON — Top liberal lawmakers are set to unveil legislation on Monday that would modernize the public housing system and start a transition to renewable energy, offering a clear policy marker for progressives as Democrats haggle over the details of President Biden’s infrastructure plan and how to push it through Congress.

The introduction of the legislation, led by Senator Bernie Sanders, the Vermont independent, and Representative Alexandria Ocasio-Cortez, Democrat of New York, is the first of multiple proposals from progressive lawmakers as they seek to influence a $2.3 trillion infrastructure overhaul to address climate change and economic inequities.

Their proposal comes as Mr. Biden and his allies are navigating congressional crosscurrents that include the larger policy demands of a Democratic caucus that has little room for disagreement and Republicans who say they want to compromise, but have largely panned a plan paid for by tax increases. While the president has outlined the broad contours of his proposal, it is up to lawmakers to reach agreement on the final provisions and details of the legislation.

Some lawmakers are floating the prospect of downsizing Mr. Biden’s legislative plan to win the 10 Republican votes needed to overcome the 60-vote filibuster threshold in the Senate, amid a flurry of lobbying from rank-and-file members. Progressive Democrats like Ms. Ocasio-Cortez and Mr. Sanders are instead doubling down on their call for a larger package than the president proposed and pushing to shape what could be one of the largest investments of federal dollars in a generation.

The progressives’ legislation, billed as the Green New Deal for Public Housing Act, is a prong of the broader climate platform that Ms. Ocasio-Cortez and others have long championed to help the United States wean itself from fossil fuels. It would repeal limitations on the construction of public housing and create grant programs to ensure improvements that not only address unsafe and aging housing, but reduce carbon emissions.

“We’re here to make sure the Democratic Party upholds its values and keeps its promises, and to also push and expand the scope and the ambition of the Democratic Party,” Ms. Ocasio-Cortez said in an interview. She and other liberal lawmakers are expected to reintroduce additional parts of the Green New Deal this week. 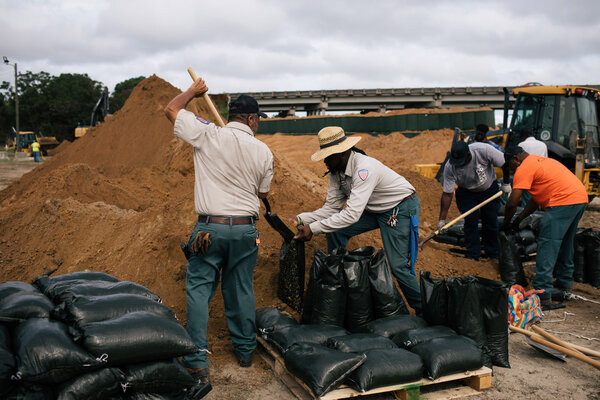 To qualify for the grants, recipients would have to adhere to strong labor standards, such as protection of collective bargaining and use of American manufacturing and products. The legislation would also fund tenant protection vouchers for displaced residents and create apprenticeship programs for residents.

When Mr. Biden outlined his proposal last month, he called for more than $40 billion to improve public housing infrastructure. At an event in New York on Sunday, a group of lawmakers from the state, including Senator Chuck Schumer, the majority leader, pushed for at least double that figure.

“Public housing has been neglected, left to get worse, and we’re not going to stand for it anymore,” Mr. Schumer said. The president’s plan, he added, was “a good start, but it ain’t enough.”

Mr. Sanders, Ms. Ocasio-Cortez and allies envision the proposal costing between $119 billion and $172 billion over 10 years to meet the needs of their constituents, according to an estimate provided to The New York Times. It aims to create thousands of maintenance and construction jobs.

“Probably our best bet would be one bill — and it should be a large bill,” Mr. Sanders said in an interview. “I think it’s just easier and more efficient for us to work as hard as we can in a comprehensive broad infrastructure plan, which includes human infrastructure as well as physical infrastruture.”

Republicans, who have sought to weaponize the Green New Deal in recent years as egregious federal overreach that would harm the economy, have already seized on the climate and housing provisions in Mr. Biden’s plan as far beyond the traditional definition of infrastructure. Mr. Biden is also preparing a second proposal that would focus even more on projects outside what Republicans call “real” infrastructure and could bring the total cost to $4 trillion.

“Republicans are not going to partner with Democrats on the Green New Deal or on raising taxes to pay for it,” Senator John Barrasso, Republican of Wyoming, said at a news conference last month. Senator Mitch McConnell of Kentucky, the minority leader, has repeatedly warned that the infrastructure plan is “a Trojan horse” for liberal priorities, while Representative Steve Scalise of Louisiana, the No. 2 House Republican, declared last week that “it’s a lot of Green New Deal” that would lead voters to turn away from Democrats.

“I think the expansive definition of infrastructure that we see in this sort of ‘Green New Deal wish list’ is called into question,” Senator Shelley Moore Capito, Republican of West Virginia, said on “Fox News” last week. “I don’t think that the American people, when they think of infrastructure, are thinking of home health aides and other things that are included in this bill.”

In acknowledgment of both Republican resistance to Mr. Biden’s plan and the lure of bipartisan legislation, some lawmakers have raised the possibility of first passing a smaller bill that addresses roads, bridges and broadband with Republican votes before Democrats use the fast-track budget reconciliation process to bypass the filibuster and unilaterally push the remainder of the legislative proposals through both chambers.

“I think that if we come together in a bipartisan way to pass that $800 billion hard infrastructure bill that you were talking about, that I’ve been urging, then we show our people that we can solve their problems,” Senator Chris Coons, Democrat of Delaware, said on “Fox News Sunday.”

While the progressives’ proposal is largely unchanged from its original iteration in 2019, the political landscape is vastly different, with Democrats in control of Washington. Mr. Sanders now oversees the Senate Budget Committee, and a historic investment of federal funds to counter the economic and health effects of the coronavirus pandemic has some lawmakers and voters more open to substantial spending.

“The time has now caught up to the legislation, and I’m really thrilled about that,” Ms. Ocasio-Cortez said. “You have a respiratory pandemic that’s layered on communities that are suffering from childhood asthma, that are already dealing with lung issues, that have pre-existing hypertension, which are all indicated by factors of environmental injustice.”

The Congressional Progressive Caucus, in an outline of five priorities for the final infrastructure product, singled out key elements of the housing legislation, including the energy efficiency standards. But with slim margins in both chambers and a huge lobbying campaign underway to ensure pet policies and provisions are included, it is unclear how Democrats would work this proposal in and whether every member of the caucus would sign on.

Mr. Sanders acknowledged that the path forward for his proposal — and a number of other liberal priorities — could be difficult even with Democrats in control. He and other members of his party are exploring using budget reconciliation to pass elements of Mr. Biden’s legislative agenda, including his infrastructure plan. But without Republican votes, every Senate Democrat would need to remain united behind the entire package.

“That is not easy stuff,” Mr. Sanders said. “People have different perspectives, people come from very different types of states, different politics, and that’s going to be a very difficult job for both the House and the Senate.”