WASHINGTON — In the national struggle over voting rights, Democrats have rested their hopes for turning back a wave of new restrictions in Republican-led states and expanding ballot access on their narrow majorities in Congress. Failure, they have repeatedly insisted, “is not an option.”

But as Republican efforts to clamp down on voting prevail across the country, the drive to enact the most sweeping elections overhaul in generations is faltering in the Senate. With a self-imposed Labor Day deadline for action, Democrats are struggling to unite around a strategy to overcome solid Republican opposition and an almost certain filibuster.

Republicans in Congress have dug in against the measure, with even the most moderate dismissing it as bloated and overly prescriptive. That leaves Democrats no option for passing it other than to try to force the bill through by destroying the filibuster rule — which requires 60 votes to put aside any senator’s objection — to pass it on a simple majority, party-line vote.

But Senator Joe Manchin III of West Virginia, the Democrats’ decisive swing vote, has repeatedly pledged to protect the filibuster and is refusing to sign on to the voting rights bill. He calls the legislation “too darn broad” and too partisan, despite endorsing such proposals in past sessions. Other Democrats also remain uneasy about some of its core provisions.

Navigating the 800-page For the People Act, or Senate Bill 1, through an evenly chamber was never going to be an easy task, even after it passed the House with only Democratic votes. But the Democrats’ strategy for moving the measure increasingly hinges on the longest of long shots: persuading Mr. Manchin and the other 49 Democrats to support both the bill and the gutting of the filibuster.

“We ought to be able to pass it — it really would be transformative,” Senator Chris Coons, Democrat of Delaware, said recently. “But if we have several members of our caucus who have just point-blank said, ‘I will not break the filibuster,’ then what are we even doing?”

Summarizing the party’s challenge, another Democratic senator who asked to remain anonymous to discuss strategy summed it up this way: The path to passage is as narrow as it is rocky, but Democrats have no choice but to die trying to get across.

The hand-wringing is likely to only intensify in the coming weeks. Senator Chuck Schumer of New York, the majority leader, vowed to force a floor debate in late June, testing Mr. Manchin’s opposition and laying the groundwork to justify scrapping the filibuster rule.

“Hopefully, we can get bipartisan support,” Mr. Schumer said. “So far, we have not seen any glimmers on S. 1, and if not, everything is on the table.”

The stakes, both politically and for the nation’s election systems, are enormous.

The bill’s failure would allow the enactment of restrictive new voting measures in Republican-led states such as Georgia, Florida and Montana to take effect without legislative challenge. Democrats fear that would empower the Republican Party to pursue a strategy of marginalizing Black and young voters based on former President Donald J. Trump’s false claims of election fraud. 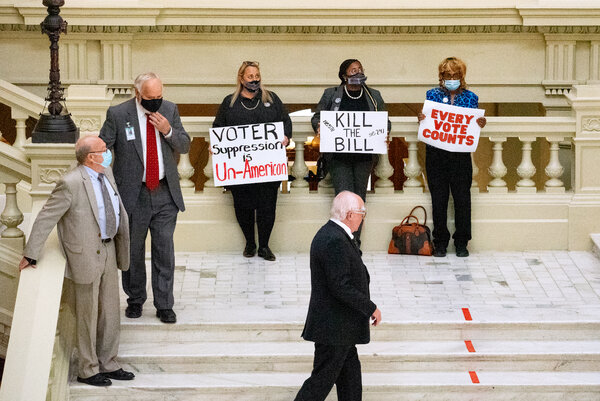 If the measure passed, Democrats could effectively overpower the states by putting in place new national mandates that they set up automatic voter registration, hold regular no-excuse early and mail-in voting, and restore the franchise to felons who have served their terms. The legislation would also end partisan gerrymandering of congressional districts, restructure the Federal Election Commission and require super PACs to disclose their big donors.

A legion of advocacy groups and civil rights veterans argue that the fight is just starting.

“This game isn’t done — we are just gearing up for a floor fight,” said Tiffany Muller, the president of End Citizens United and Let America Vote, which are spending millions of dollars on television ads in states like West Virginia. “At the end of the day, every single senator is going to have to make a choice if they are going to vote to uphold the right to vote or uphold an arcane Senate rule. That is the situation that creates the pressure to act.”

Proponents of the overhaul on and off Capitol Hill have focused their attention for weeks on Mr. Manchin, a centrist who has expressed deep concerns about the consequences of pushing through voting legislation with the support of only one party. So far, they have taken a deliberately hands-off approach, betting that the senator will realize that there is no real compromise to be had with Republicans.

There is little sign that he has come to that conclusion on his own. Democrats huddled last week in a large conference room atop a Senate office building to discuss the bill, making sure Mr. Manchin was there for an elaborate presentation about why it was vital. Mr. Schumer invited Marc E. Elias, the well-known Democratic election lawyer, to explain in detail the extent of the restrictions being pushed through Republican statehouses around the country. Senators as ideologically diverse as Raphael Warnock of Georgia, a progressive, and Jon Tester of Montana, a centrist, warned what might happen if the party did not act.

Mr. Manchin listened silently and emerged saying his position had not changed.

Despite the intense focus on him, Mr. Manchin is not the only hurdle. Senator Kyrsten Sinema, Democrat of Arizona, is a co-sponsor of the election overhaul, but she has also pledged not to change the filibuster. A handful of other Democrats have shied away from definitive statements but are no less eager to do away with the rule.

“I’m not to that point yet,” Mr. Tester said. He also signaled he might be more comfortable modifying the bill, saying he “wouldn’t lose any sleep” if Democrats dropped a provision that would create a new public campaign financing system for congressional candidates. Republicans have pilloried it.

Republicans are hoping that by banding together, they can doom the measure’s prospects. They succeeded in deadlocking a key committee considering the legislation, though their opposition did not bar it from advancing to the full Senate. They accuse Democrats of using the voting rights provisions to distract from other provisions in the bill, which they argue are designed to give Democrats lasting political advantages. If they can prevent Mr. Manchin and others from changing their minds on keeping the filibuster, they will have thwarted the entire endeavor.

The Battle Over Voting Rights

Amid months of false claims by former President Donald J. Trump that the 2020 election was stolen from him, Republican lawmakers in many states are marching ahead to pass laws making it harder to vote and changing how elections are run, frustrating Democrats and even some election officials in their own party.