WASHINGTON — Senator Amy Klobuchar advertised her bipartisan legislative efforts, just as she does on the Democratic presidential campaign trail. Senator Kamala Harris was prosecutorial and pointed, evoking memories of her treatment of Brett M. Kavanaugh at his Supreme Court confirmation hearing.

And Senator Cory Booker flubbed his lines, saying “obstruction” instead of “collusion.” Later, both he and Ms. Harris put out fund-raising emails and posts on Twitter calling for Attorney General William P. Barr to resign.

Wednesday’s Senate Judiciary Committee hearing offered Democrats on Capitol Hill their first chance to grill Mr. Barr about his handling of the special counsel’s report and decision not to pursue an obstruction of justice case against President Trump. And the three committee Democrats running for president — Ms. Klobuchar, Ms. Harris and Mr. Booker — were not about to let a prime branding opportunity go to waste.

Each sought to use the hearing to distinguish him- or herself from the others — a necessary task in a field so crowded that voters can barely remember some Democratic contenders’ names, and in a week when former Vice President Joseph R. Biden Jr. declared his candidacy and instantly catapulted to the front of the Democratic pack.

Ms. Klobuchar, of Minnesota, is positioning herself as a sensible centrist Midwesterner who can bring the country together to defeat Mr. Trump. She wasted little time in praising two Republicans, Senators James Lankford of Oklahoma and Lindsey Graham of South Carolina (the committee’s chairman and a scourge of liberals), who have joined her in supporting legislation to prevent foreign interference in the 2020 election.

Ms. Harris, of California, is going for the progressive vote. She hammered Mr. Barr with questions, one after another, repeatedly cutting him short and showing off legal acumen honed as her state’s attorney general. She prodded him into saying that he had not examined any of the underlying evidence before deciding not to charge the president with obstruction of justice — a moment that drew praise from the national affairs editor of the left-leaning magazine Mother Jones.

Mr. Booker, of New Jersey, has struggled to stand out — and his troubles were accentuated by his performance on Wednesday. A former mayor of Newark, he was bracketed by two former prosecutors — Ms. Klobuchar and Ms. Harris — who know how to interrogate a witness. 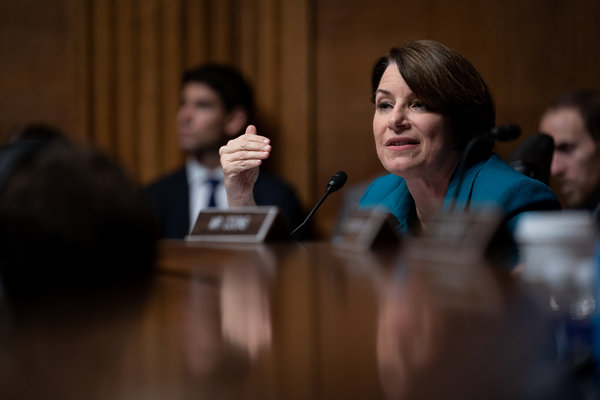 Mr. Booker sought to turn Mr. Barr’s words against him, complaining that the attorney general had effectively shilled for the president. He cited Mr. Barr’s news conference when he released the redacted report of the special counsel, Robert S. Mueller III, and repeatedly invoked the president’s favorite defense: “No collusion.” But the moment was lost when Mr. Booker misspoke, confusing the two most prominent words in the debate over Mr. Trump’s conduct.

Democrats, of course, were not the only ones posturing. Mr. Graham opened the hearing by brandishing a printed copy of the 448-page Mueller report, holding it in the air as dozens of camera shutters clicked. He used his remarks to once again train a spotlight on Mr. Trump’s 2016 Democratic opponent, Hillary Clinton, and the anti-Trump texts of the former F.B.I. agents who investigated the Trump campaign.

“What do we know?” Mr. Graham asked acidly. “We know that the person in charge of investigating hated Trump’s guts.”

Ms. Klobuchar emerged a clear winner then; when she disclosed her father’s battle with alcoholism, then-Judge Kavanaugh lashed out at her — and subsequently offered an apology, which elevated the senator’s national profile while she was still contemplating a White House run. Ms. Harris employed her same style of rat-a-tat questioning, but it seemed to lead to nowhere.

But none of that compared with Mr. Booker’s threat to release emails with the declaration, “This is about the closest I’ll ever come in my life to an ‘I am Spartacus’ moment.” His comments were roundly mocked by conservatives, including The Washington Post columnist Kathleen Parker (“Gambling everything, he won a punch line,” she wrote) and Justice Clarence Thomas.

On Wednesday, Ms. Harris seemed to come out on top, judging by the coverage on Fox News, which gave her top billing. “Kamala Harris tears into Barr at Senate hearing, as 2020 Dems pile on AG,” the headline on its website blared.