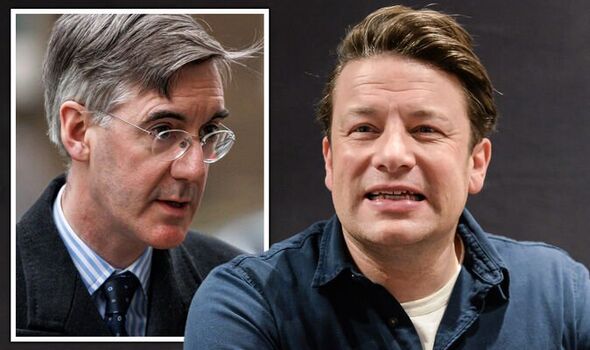 The Business Secretary branded the outburst “odd” and insisted compassion was shown in actions not words.

Mr Rees-Mogg said he was also “suspicious” of people who parade their kindness and suggested they have “ulterior motives”.

He told the Express: “I don’t wish to get in a slanging match with someone I don’t particularly know,” he added.

“I have always been suspicious of people who go round saying they are frightfully kind. It usually means they have got some ulterior motive. I think kindness is in actions rather than in statements.

“What are we doing with the energy price cap? That is something that means that people aren’t going to have to worry about heating their homes in the winter.

“This seems to me to be the duty of government to look after people, things they can’t do for themselves. Is that kind or is it just our job to get on with it?”

Oliver called for more families to be eligible and said he believes that investing in free school meals for children could lead to an increase in economic growth for the country.

Pupils are eligible for free school meals if their parents are on Universal Credit and have an annual income of no more than £7,400, or are on another benefit such as jobseeker’s allowance.

The restaurateur told the BBC he has no faith in Prime Minister Liz Truss but believes she will be a ship that “passes in the night”.

“I just think kindness has to be injected through this party if they’ve got any chance. And I don’t know if they’ve got it in them to show this kindness,” he said.

Oliver also lashed out at former Prime Minister Boris Johnson claiming he had to “nearly die and have a child” to put him “in the frame of mind to do the right thing” over extending free school meals during the covid pandemic.

Time may soon be up on changing B.C.’s clocks for Daylight Saving Time