WASHINGTON — As she arrived at the Capitol on Wednesday morning to meet her fate, the soon-to-be deposed No. 3 Republican in the House hinted that she was already eyeing her next role.

“The party is going to come back stronger, and I’m going to lead the effort to do it,” Representative Liz Cheney said as she stepped into an elevator and down to her demise.

Less than an hour later, accompanied by the acclaimed photographer David Hume Kennerly, a family friend, Ms. Cheney returned to her office for an interview with NBC’s Savannah Guthrie. A sit-down with Bret Baier of Fox News was to follow.

The message was unmistakable: Her colleagues may have stripped Ms. Cheney of her post as chair of the House Republican Conference, but they have effectively handed her a new platform and a new role as the leader of the small band of anti-Trump Republicans.

Representative Kevin McCarthy, the Republican minority leader, was trying to address a short-term challenge, and in a narrow sense he was successful. He will no longer have to contend with a member of his leadership team who, much to the consternation of him and his colleagues, continues to condemn former President Donald J. Trump’s attempt to overturn the election.

By excommunicating Ms. Cheney from her position, however, Republican lawmakers have created a host of new problems for their party.

They have underscored the grip that the increasingly unpopular Mr. Trump retains on their ranks; demoralized Republicans and independents who want to move on from his tenure; and, perhaps most significantly, emboldened a household-name conservative to take her case against Trumpism far beyond a Capitol conference room.

House Republicans knew what they had done as soon as they emerged from their meeting.

“That’s what it looks like when somebody is running for president,” Representative Mike Rogers of Alabama muttered to colleagues as they quickly walked past Ms. Cheney during her remarks in front of the cameras.

Other long-serving members, though, were more sobered by the divisions Mr. Trump is still sowing among Republicans and by the megaphone they had just handed Ms. Cheney.

“I don’t think it’s a healthy moment for the party,” said Representative Patrick McHenry of North Carolina, himself a former member of Republican leadership. “I do think it enhanced Liz’s stature and position in a way that furthers her message but to the disadvantage of the broader party.”

Later Wednesday, Mr. McCarthy complicated matters, and confounded Republicans, by walking out of his first White House meeting with President Biden and pronouncing, “I don’t think anybody is questioning the legitimacy of the presidential election” — a statement starkly at odds with remarks made by numerous G.O.P. House lawmakers.

The best Representative Tom Cole of Oklahoma could say about the day was that “the election isn’t today” and “if something like this has to happen, you’d rather have it in an off-year.”

These are strange times for Republicans.

The traditional indicators suggest they have good reason to be optimistic about the midterm elections next year.

The party that doesn’t control the White House usually picks up seats in a president’s first midterm elections, redistricting appears to favor Republicans, and a number of House Democrats are voting with their feet by retiring or running for statewide office.

And in both chambers, the bar is low: Republicans need only six seats to win the House and a single seat to take back the Senate.

The split screen can be agonizing for party stalwarts.

“We’ll win the House, but I worry no good lessons are being learned about Jan. 6 and Trump’s ongoing effort to delegitimize the November elections,” said David Kochel, a veteran G.O.P. strategist. 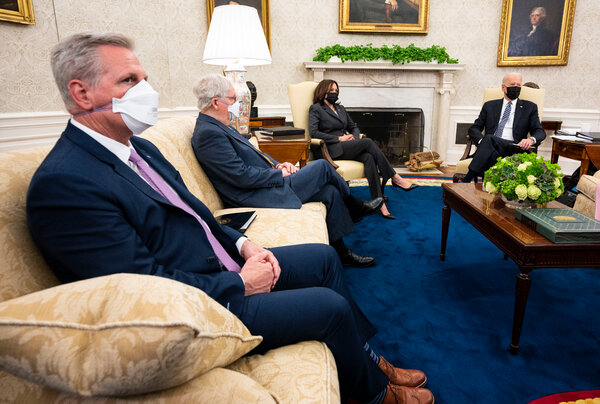 Last week, when the question of whether House Republicans should oust Ms. Cheney was crescendoing, Mr. McHenry and a leading redistricting strategist held a private Zoom call for donors and delivered some much-coveted good news.

Unveiling an online map with each state’s expected changes in partisan composition, Mr. McHenry and the strategist, Adam Kincaid, predicted that Republicans could reclaim the House majority in 2022 on their gains from the reapportionment process alone.

“The difficulty is to get members to see the long-term advantages we have rather than the short-term struggles and nastiness,” Mr. McHenry said.

Most of his colleagues concluded that as long as Ms. Cheney was highlighting Mr. Trump’s conspiracy-mongering, and their own timidity, it would prove difficult to fully capitalize on those long-term advantages.

Yet it’s Mr. Trump who, well past Mr. Biden’s first-100-day mark, continues to present Republicans with their most vexing problem. At issue: how to accommodate a former president who’s beloved by their core voters, more detested than ever among the broader electorate and consumed with his defeat and campaign of retribution.

“Trump is the one who keeps raising it,” said Representative Fred Upton of Michigan, one of the 10 House Republicans who voted to impeach Mr. Trump in January.

An NBC News poll last month found that Mr. Trump’s favorability rating was down to 32 percent among all voters and 14 percent among independents. Democrats can barely contain their delight over the disarray across the aisle.

“Right now should be easiest time for the party out of power to unify in opposition,” Representative Brendan Boyle of Pennsylvania said.

As Ms. Cheney discovered, Republican leaders will continue to bow to Mr. Trump as long as they’re worried that their rank-and-file voters will punish them for disloyalty.

This could prove ominous for Republicans in the most competitive districts and states: They may not be able to survive a primary without him, but they may prove unelectable if they’re linked too closely to him.

Given Democrats’ slim control of the House and the newly drawn seats they will have to defend, the long shadow of Trumpism still may not be enough for the party to hold the House in 2022, as even the most hardened Democratic partisans acknowledge. “They have a strong likelihood of taking the House,” Paul Begala, a Democratic strategist, said of Republicans.

Yet Mr. Begala argued that the vise Mr. Trump has Republicans in — by which most of them must align with him to win a primary — could brighten Democrats’ chances in the Senate. “Republicans did not cling to Hooverism,” he said. “This is a huge mistake.”

In two of the races for the most competitive Democratic-held Senate seats, Arizona and Georgia, as well as a contest for the seat Republicans may have the most difficulty holding, Pennsylvania, Republicans are worried about Mr. Trump’s potential to rally support behind a candidate who can’t win the general election.

The fear for some in the party is that 2022 echoes 2010, when Republicans took back the House but fell short in the Senate because they had elevated candidates who could not prevail in November.

For many Republicans, though, what’s more alarming about the Cheney-Trump feud is the implications for the party’s long-term health.

Whether Ms. Cheney seeks to fight back electorally — perhaps in a symbolic long-shot White House bid in 2024 — she’s plainly comfortable with political martyrdom.

In fact, after largely voting with Mr. Trump over the last four years and trying to stay out of his line of fire, she seems to welcome his hatred and the opportunity it offers to change, or at least shame, the party.

“If you want leaders who will enable and spread his destructive lies, I’m not your person; you have plenty of others to choose from,” she told her colleagues during the caucus meeting, according to a Republican in the room. “But I promise you this: After today, I will be leading the fight to restore our party and our nation to conservative principles, to defeating socialism, to defending our republic, to making the G.O.P. worthy again of being the party of Lincoln.”

Mr. Trump’s most prominent defenders were not exactly worried.

That’s exactly what worries some longtime Republicans, including a few in the House leadership — that Ms. Cheney’s new mission will only prod Mr. Trump to run again in 2024 to prove his hold on the party.

For now, however, most rank-and-file congressional Republicans are planning to do what they’ve done since Mr. Trump emerged as a candidate nearly six years ago — very little.

“His policy legacy is popular, but his personality obviously continues to be controversial,” said Representative Andy Barr of Kentucky, urging his party to focus on policy over persona before betraying a touch of self-awareness: “I’m not saying it’s easy.”