Justice Ruth Bader Ginsburg, the second woman to serve on the Supreme Court, will be the first woman to lie in state in the United States Capitol on Friday.

The rare distinction was announced on Monday by Speaker Nancy Pelosi. Justice Ginsburg, who died on Sept. 18 at 87, “fought for our values til the end,” Ms. Pelosi said on Twitter. Her death, the speaker said, was an “incredible devastating loss for America.”

Ahead of Friday’s ceremony at the Capitol, Justice Ginsburg lay in repose outside the Supreme Court on Wednesday and Thursday, her flag-draped coffin positioned under the portico atop the building’s front steps.

The practice of paying tribute to distinguished public servants by having them lie in state at the Capitol dates to 1852 and is among the rarest of posthumous tributes for government officials in the United States. As such, the language and customs of the ceremony might be unknown to many.

Here are some of the basics.

The terms are often used interchangeably, but there are subtle differences.

By strict definition, lying in state is reserved for those who served in the government, and it applies only to the time their coffins are displayed in the Capitol or a government building, either in Washington or at the state level. The ceremony is accompanied by a military guard.

If the ceremony is outside a capitol building, it is described as lying in repose.

Anyone not from government whose remains are put in public view in a government building is said to be lying in honor, accompanied by a Capitol Police guard.

That said, “lying in state” is often used colloquially for private citizens, as when a long line of visitors paid respects to Aretha Franklin at the Wright Museum in Detroit in 2018. She was not technically lying in state in the governmental sense, but most news outlets, including The New York Times, used the phrase.

Who gets the honor?

Aside from the 33 people to lie in state (Justice Ginsburg will be the 34th), four private citizens have lain in honor at the Capitol. They were the Rev. Billy Graham, the Christian evangelist, in 2018; Rosa Parks, the civil rights leader, in 2005; and two Capitol Police officers, Jacob J. Chestnut and John Gibson, who were shot in the Capitol in 1998. 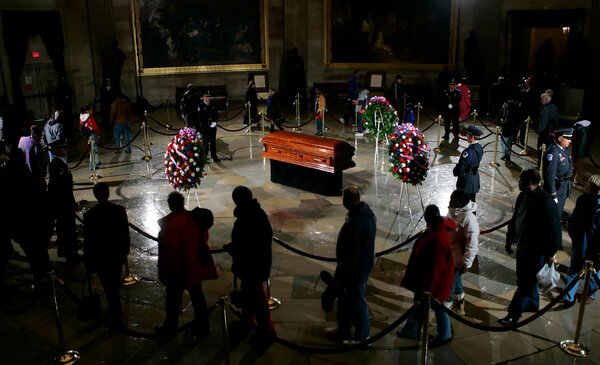 There are no specific criteria for who is chosen, beyond the approval of Congress and the consent of the deceased’s family.

In July, John Lewis, the 17-term congressman from Georgia and an icon of the civil rights movement, became the 16th United States representative to lie in state at the Capitol, after Representative Elijah Cummings in October 2019.

Until the early 20th century, lying-in-state ceremonies were typically reserved for presidents or members of Congress who died in office, said Betty K. Koed, a historian at the United States Senate. Now, it depends on what the family wants. To her knowledge, nobody has been denied the honor.

“Some families are more private than others,” Ms. Koed said. “Some are comfortable in the public eye and some are not.”

President Harry S. Truman opted not to lie in state because he “hated those big ceremonies,” said Steve Livengood, director for public programs and chief guide at the United States Capitol Historical Society. “He knew his wife never wanted to be first lady and hated Washington, and she would have to live through his funeral.”

Concessions to the coronavirus

Because of the coronavirus pandemic, which has upended life across the globe, the formal ceremony for Justice Ginsburg at the Capitol on Friday will be open only to invited guests, Ms. Pelosi’s office said.

While the details of how Justice Ginsburg’s ceremony will proceed aren’t yet known, the ceremony for Representative Lewis at the Capitol in July may offer clues. His was by invitation only as well. Chairs for the event were set up to follow social-distancing protocols, and attendees, including the members of the military who carried his coffin from a hearse to the Capitol, wore face coverings.

COVID crisis in the arts: Will the show go on?
Asia

Malaysia logs 847 Covid-19 cases, fatalities breach 200
We and our partners use cookies on this site to improve our service, perform analytics, personalize advertising, measure advertising performance, and remember website preferences.Ok