Sadiq Khan grilled over calls for extra funding in London

London’s mayor ordered a review on tearing down landmarks that “reflect a bygone era” after Black Lives Matter protests. But critics said he is “pandering to statue vandals” who want to “smear British heroes”. Mr Khan was also attacked for splurging money on the project while slashing police budgets in the city.

He said: “This is a disgraceful waste of taxpayers’ cash. The mayor should not be spending a quarter of a million pounds on a divisive, virtual signalling PR stunt which threatens to erase large swathes of London’s history.”

Mr Bacon said the review, which also includes all of the capital’s plaques and street names, should “make us all deeply uncomfortable”.

“No politician should be allowed to rewrite our nation’s history,” he added. 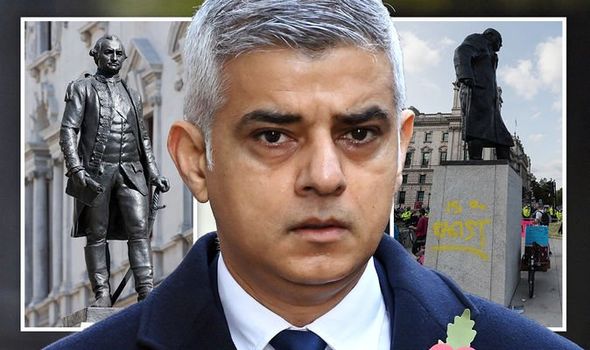 “Toppling statues does nothing to resolve today’s problems and only hides yesterday’s mistakes.

“Instead of pandering to statue vandals and protesters who want to smear British heroes, the Mayor should focus on Londoners’ priorities.

“Londoners won’t forgive Khan for cutting the capital’s police by £110million while he hoards a war chest to topple towering British figures.”

Mr Khan announced plans for the commission in June after a statue of Edward Colston, a philanthropist who made his fortune from the slave trade, was toppled by protestors in Bristol.

Sir Winston Churchill’s statue in Parliament Square was daubed with graffiti branding him a racist during unrest in the capital.

But Mr Khan insists he does not want the Second World War leader’s tribute to be removed.

One of the statues that is likely to be targeted is the Clive of India monument in Whitehall.

Mr Khan has approved up to £247,000 for the Commission for Diversity in the Public Realm.

The funding includes £77,000 for community engagement, recruitment, staffing and expenses as well as £60,000 on mapping and research, while £110,000 has been ear-marked for a community fund.

A spokesman for the mayor said: “London is one of the most diverse cities in the world, yet our public spaces simply don’t capture who we are and what we represent.

“Sadiq is committed to being a mayor for all Londoners and makes no apology for creating a Commission for Diversity in the Public Realm to help ensure everyone can take pride in our public landscape.”