Welcome to The Tip Sheet, a daily political analysis of the 2018 elections, based on interviews with Republican and Democratic officials, pollsters, strategists and voters.

• Just as there’s a consensus in both parties that Democrats are likely to pick up about 35 House seats on Tuesday, there’s a bipartisan view that the outlook for the Senate is … far less clear.

• Top officials on both sides agree that Republicans are likely to defeat Senator Heidi Heitkamp, Democrat of North Dakota, who is roughly 10 points down in the polls.

• But every other Senate Democrat is still seen as viable. That itself is rather extraordinary given that Democrats are defending 10 seats in states that President Trump carried.

• A new poll on Saturday showed Senator Claire McCaskill of Missouri tied with Josh Hawley, the Republican nominee; she was widely seen throughout October as the most vulnerable incumbent after Ms. Heitkamp. Mr. Trump is set to campaign for Mr. Hawley in Missouri on Monday night, joined by Sean Hannity and Rush Limbaugh. 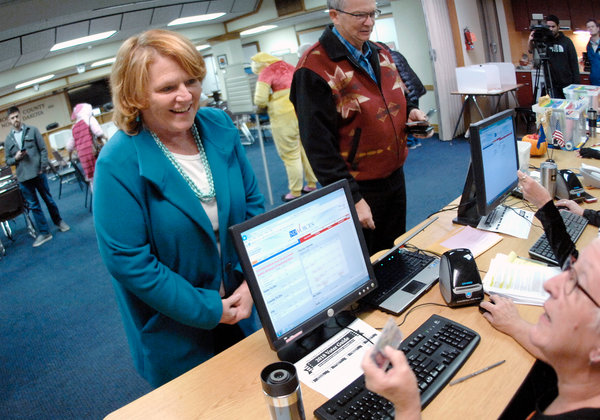 • Senator Joe Donnelly, Democrat of Indiana, has a small lead in some public polls even as Republicans claim that their surveys have him trailing.

• If Democrats manage to lose just the Heitkamp seat, they have a (remote) chance of winning the Senate. They would have to win three of these four Republican-held seats: Texas, Arizona, Nevada and Tennessee.

• Of the four, officials in both parties think Democrats are best positioned to win in Arizona and Nevada, where Mr. Trump’s incendiary language on immigration has infuriated Hispanic voters.

What’s less clear is which of the remaining two seats is more viable:

• In Tennessee, Democrats insist that Phil Bredesen, the former governor, is only narrowly trailing in the Senate race. Public polls, though, show the Republican, Representative Marsha Blackburn, enjoying a lead.

• That leaves — yes — the Texas race between Representative Beto O’Rourke and Senator Ted Cruz. Republicans insist that the race is in their favor and that Mr. Cruz leads outside the margin of error in polling. But early voting in Texas is reaching historic levels and veteran Democrats say it’s folly to trust any polling when it’s not clear what the universe of voters could be, given that Mr. O’Rourke has excited many Texans beyond those who usually vote.

So, yes, control of the Senate could be coming down to turnout.

The office of Georgia Secretary of State Brian Kemp, who is also the Republican nominee for governor, said Sunday that the authorities had opened an inquiry into the Democratic Party of Georgia after “a failed attempt to hack the state’s voter registration system.” Mr. Kemp’s office offered no evidence or details of the episode.

Democratic leaders called the inquiry an abuse of power and political stunt by Mr. Kemp, given his dual role overseeing an election in which he is also running for the state’s top job. Democrats said any claims of the party being involved in a hack were false.

Mr. Kemp’s office disclosed two days before an election in which polls show Mr. Kemp effectively tied with Stacey Abrams, who is trying to become the first black woman elected governor anywhere in the United States. Ms. Abrams said Sunday that the hack inquiry was a desperate move on Mr. Kemp’s part.

Although Mr. Kemp’s office raised the specter of wrongdoing by Democrats, word of the inquiry was certain to heighten fears that Mr. Kemp was seeking to tamper with the integrity of the election. Democrats have spent weeks calling on Mr. Kemp to resign his post, arguing that he could not independently oversee an election in which he is running.

“While we cannot comment on the specifics of an ongoing investigation, I can confirm that the Democratic Party of Georgia is under investigation for possible cyber crimes,” Candice Broce, a spokeswoman for Mr. Kemp, said in a statement. “We can also confirm that no personal data was breached and our system remains secure.”

Rebecca DeHart, executive director of the Georgia Democratic Party, said: “This is yet another example of abuse of power by an unethical Secretary of State. To be very clear, Brian Kemp’s scurrilous claims are 100 percent false, and this so-called investigation was unknown to the Democratic Party of Georgia until a campaign operative in Kemp’s official office released a statement this morning.

“This political stunt from Kemp just days before the election is yet another example of why he cannot be trusted and should not be overseeing an election in which he is also a candidate for governor.”

Mr. Kemp’s office said the F.B.I. was notified about the inquiry. Kevin Rowson, a spokesman for the F.B.I. office in Atlanta, declined to comment on Sunday.

Mr. Kemp’s dual status as candidate and regulator has been a subject of rancorous debate in Georgia, where allegations of voter suppression have repeatedly been litigated in the courts. As recently as Friday, a judge sided with Mr. Kemp’s critics in one case.

Mr. Kemp has broadly decried “this farce about voter suppression” and said he had “made it easier to vote and harder to cheat in our state.”

But Ms. Abrams, who made much of her reputation through her work to register new voters across Georgia, argued that voters had “been purged, they’ve been suppressed and they’ve been scared.”

Mr. Kemp is set to appear with President Trump at a campaign rally Sunday afternoon in Macon, Ga.

Gillum, DeSantis and a gun mailer

Mike Bloomberg and George Soros want to take away Florida’s guns, according to mailers arriving at homes there last week urging support for Ron DeSantis, the Republican candidate for governor.

The literature — claiming to be from the National Rifle Association’s political arm — says Mayor Andrew Gillum of Tallahassee, the Democratic nominee who is locked in a tight race with Mr. DeSantis, “shares the same radical anti-gun agenda as Michael Bloomberg and George Soros.”

• Mr. Bloomberg and Mr. Soros favor gun control. And both have been targets of gun rights advocates in the past.

• In a tweet this week, the N.R.A. took aim at the billionaires, along with Tom Steyer, a California megadonor to Democratic candidates. Mr. Soros and Mr. Steyer were among the targets who had pipe bombs sent to them by a fervent Trump supporter last month.

“Another billionaire is pumping unlimited money into electing anti-gun lawmakers,” the tweet said. “Notorious anti-gunner George Soros joins anti-gun billionaires Steyer and Bloomberg. There is no end to how much they’ll pay to push their elitist agenda on Americans.”

The Battle for Congress Is Close. Here’s the State of the Race.

The math currently favors the Democrats in the House and the Republicans in the Senate.

• Mr. Gillum has said he supports the Second Amendment but favors a series of gun control measures. His campaign has received millions in support from the three men.

Mr. Gillum has spent part of his campaign swatting away criticisms over crime issues in Tallahassee on his watch. So Democrats had cause to privately wonder if the fatal shooting at a yoga studio there on Friday might place him on the defensive.

On Saturday, after returning home briefly to tend to the situation, Mr. Gillum resumed campaigning and chose to confront the subject directly.

“It only, for me, underscores what we have to do just three days from now,” he said at a rally in West Palm Beach, “when we send an unapologetic message to the N.R.A. that their time is up in the state of Florida.

In the closing days of the tight Senate battle in Missouri, Mr. Hawley, the Republican candidate, has been fighting off the latest questions about his turbulent tenure as attorney general.

His opponent, Senator McCaskill, has seized on a Kansas City Star article that said Mr. Hawley’s “out-of-state political consultants gave direct guidance and tasks to his taxpayer-funded staff” soon after his 2016 election, and followed up to “ensure the tasks were completed, according to emails, text messages and other records.”

The same day the article appeared last week, Ms. McCaskill’s campaign tweeted video of Mr. Hawley proclaiming after his election that political consultants would no longer run the state.

A Saturday tweet from Ms. McCaskill on the topic simply proclaimed “goodness gracious.”

Hey, I’m Alex Burns, a politics correspondent for The Times. Send me your questions using the NYT app. I’ll give you the latest intel from the campaign trail.

Mr. Hawley, whose team did not comment, has been busy with a string of 11th-hour rallies featuring President Trump (the final one is Monday night), Vice President Mike Pence and Oliver North, the president of the N.R.A.

• The president has two campaign rallies scheduled: 4 p.m. in Macon, Ga., with Brian Kemp, the Republican nominee for governor; and 7 p.m. in Chattanooga, Tenn., with Ms. Blackburn.

• Our colleagues Julie Hirschfeld Davis and Katie Rogers on the White House team have a really good story about women at Trump rallies who see the president as a hero protecting a way of life.

Thanks for reading The Tip Sheet. Have you checked out On Politics with Lisa Lerer, our evening newsletter? Subscribe here to get it delivered to your inbox.