Home » Politics » Should there be a snap general election now? Vote in Express.co.uk poll

Mr Johnson’s promise to take the country out of the European Union on October 31 with or without a deal has resulted in a a constitutional crisis. An alliance of opposition MPs are plotting with rebels in Mr Johnson’s Conservative Party to take control of parliament and tie the Government’s hands with legislation that would block a no-deal exit. Parliament returns on Tuesday from its summer break and Mr Johnson has warned rebels that if they voted against the government they would be kicked out of his Conservative Party.

The Sun newspaper said Mr Johnson was planning a snap election in five weeks’ time – before Brexit – if MPs defeat him.Asked if the prime minister was planning an election,

Mr Johnson’s spokesman said: “He has been asked this on many, many occasions and his answer has always been that he doesn’t want there to be an election.”

“We must come together to stop no deal – this week could be our last chance.” 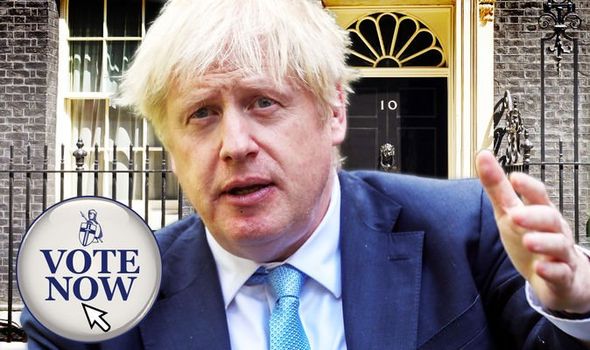 During a speech outside Downing Street this evening, Mr Johnson said he was “encouraged by the progress we are making” and the chances of a Brexit deal “are rising”.

He said it would “hold us back” if Brussels believed MPs would back a “pointless delay” to Brexit.

He also warned that MPs would “chop the legs out” from the UK position if they backed a Brexit extension and stressed there were “no circumstances” in which he would personally seek a delay.

Mr Johnson said outside Downing Street: “Five weeks ago I spoke to you on these steps and said this Government was not going to hang around and we would not wait until Brexit Day – October 31 – to deliver on the priorities of the British people.”