Hi. Welcome to On Politics, your guide to the day in national politics. I’m Lisa Lerer, your host.

I have to open this newsletter with a shameful admission.

So, I’m sitting at my desk in The New York Times’s Washington bureau, waiting, like everyone in town, for the release of Robert S. Mueller III’s report. CNN in on, Twitter is open and the office is wired.

This is a moment, people: It’s a major crossroads in Donald J. Trump’s presidency. It’s the conclusion of 23 months, 34 indictments and guilty pleas, 500 search warrants and 2,300 subpoenas.

Finally it drops. I open the 448-page document, with all its legalese and redactions, breathe in the history of the moment and … immediately open five different tabs of junk on the internet. I mean, this thing is long. And overwhelming.

Of course, I did eventually dive into it — this is my job, after all — and man, does it paint a picture of an administration with a culture of stretching, if not undermining, the truth.

(If you read only one section, make it pages 290-299, which detail Mr. Trump’s attempts to fire the special counsel.)

For the rest of you with a life outside of politics, journalists at The Times spent all day digging through the report. Here’s a recap of what we found.

Was there one standout moment?

Perhaps the most dramatic passage is an account from May 2017. Jeff Sessions, then the attorney general, told Mr. Trump that Rod J. Rosenstein, the deputy attorney general, had appointed Mr. Mueller as special counsel.

“Oh my God. This is terrible. This is the end of my presidency,” he said, finishing the thought with a word we can’t print in a family newsletter.

Mr. Trump then “lambasted” Mr. Sessions for recusing himself from the investigation, saying his attorney general had let him down.

“Everyone tells me if you get one of these independent counsels it ruins your presidency,” Mr. Trump said. “It takes years and years and I won’t be able to do anything. This is the worst thing that ever happened to me.”

[Get On Politics delivered to your inbox.] 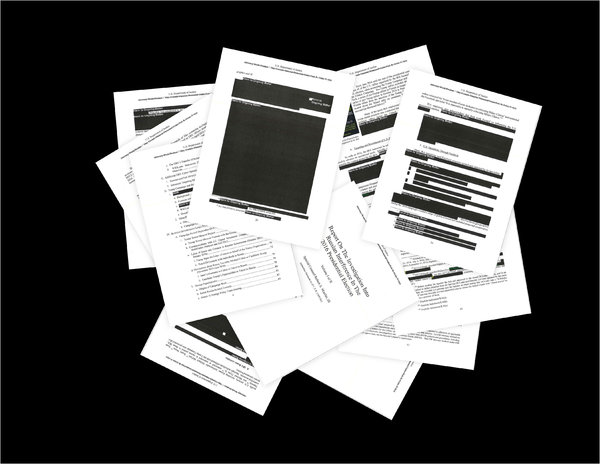 What does it say about collusion with Russia?

The Trump campaign didn’t coordinate with the Russian government. But the two talked a lot.

In the report, Mr. Mueller’s team wrote that they were not looking for “collusion” — a term they said was used in the press but has no clear legal definition. Instead, they examined whether anyone associated with Mr. Trump “coordinated” with Russians, defined as an agreement between both parties to break the law.

The report does not find evidence of coordination. But it does offer a rather damning list of interactions between Trump allies and Russians.

Those infamous tapes from a Moscow hotel. In October 2016, a Russian businessman, Giorgi Rtskhiladze, texted Michael Cohen, Mr. Trump’s longtime lawyer, to say that he had “stopped flow of tapes from Russia,” a reference to claims that Mr. Trump was caught on video with prostitutes in 2013. The report notes, though, that the tapes were likely “fake.”

The president said at the time that he was joking, but in the report, Michael T. Flynn, who would later work as national security adviser, said he was asked repeatedly by Mr. Trump to find the emails. Mr. Flynn contacted multiple people to help his search, including Peter Smith, a longtime Republican operative.

Mr. Smith created a company, raised tens of thousands of dollars and recruited security experts and business associates. He claimed “he was in contact with hackers ‘with ties and affiliations to Russia’ who had access to the emails, and that his efforts were coordinated with the Trump Campaign,” the report says.

The special counsel couldn’t establish if that was true. But they did establish that Mr. Smith wrote to the Trump campaign’s co-chairman, Sam Clovis, among others, about his efforts.

Here’s a much more expansive selection of excerpts and highlights from the report.

What about the obstruction investigation?

The report doesn’t clear Mr. Trump of charges that he obstructed justice, as Attorney General William P. Barr did last month — in fact, it shows that he certainly tried to interfere.

“The President’s efforts to influence the investigation were mostly unsuccessful, but that is largely because the persons who surrounded the President declined to carry out orders or accede to his requests,” wrote Mr. Mueller’s team.

“If we had confidence after a thorough investigation of the facts that the president clearly did not commit obstruction of justice,” they wrote, “we would so state.”

Here’s some of what they’re describing:

• For 13 days after Mr. Trump asked Mr. Session to resign in May 2017, the president held on to his resignation letter, showing it to aides on Air Force One, a decision that he was warned could function as a “shock collar” to influence the Justice Department. Finally, on May 30, the president returned the letter with a notation: “Not accepted.”

• Mr. Trump repeatedly called Donald F. McGahn II, the White House counsel, at home and ordered that he have Mr. Mueller removed. Mr. McGahn didn’t follow the direction, deciding he would rather resign than trigger what he regarded as a potential “Saturday Night Massacre.”

Here’s a full look at the key moments in the investigation into whether Mr. Trump obstructed justice.

A primer on where things stand

What, exactly, is this thing?

The two-volume document is a redacted version of the report written by Mr. Mueller, the special counsel, presenting the findings of his team’s investigation into Russian interference in the 2016 presidential election, and into Mr. Trump’s possible effort to influence the outcome.

Mr. Barr, the attorney general, released a four-page summary of Mr. Mueller’s report last month, in which he said the investigation did not find that the Trump campaign had colluded with the Russian government and cleared the president of the charge of obstruction of justice. He reiterated those conclusions in a news conference Thursday morning before the report was released.

A lot of Democrats were skeptical of Mr. Barr’s summary — particularly on the obstruction issue — and pushed for the release of the full report.

What’s up with all the redactions?

Mr. Barr has said the redactions — or blacked out portions of the report — were necessary to protect sensitive information, grand jury information and third parties who could be unfairly damaged. He color-coded them, using different colors to represent different types of redactions. (They have, of course, already become a meme.)

A less-redacted version will be made available to a bipartisan group of congressional leaders, Mr. Barr said Thursday.

Democrats said they’re going to push for an unredacted version of the report and the underlying evidence, an effort that’s likely to end up in court — possibly the Supreme Court.

Mr. Barr wants to investigate the origins of the F.B.I. investigation into Russia’s election interference, while Democrats in Congress want to probe the special counsel, attorney general and Mr. Trump’s behavior.

Mr. Barr is already scheduled to testify before Congress in early May; the House Judiciary Committee said Thursday they’ll call Mr. Mueller, too. And lawmakers in the House and Senate are busy with their own investigations into matters related to the inquiry.

“The responsibility now falls to Congress to hold the president accountable for his actions,” said Representative Jerry Nadler, the House judiciary chairman.

Is this going to change anyone’s mind about the president?

Probably not. Mr. Trump’s approval ratings have barely budged since Mr. Barr issued his summary, which left voters nearly evenly split over whether Mr. Trump had committed any serious wrongdoing — a reflection of the partisan divide over the issue. In a Washington Post-Schar School poll released last month, 51 percent of respondents said the investigation will have no effect on their 2020 vote.

We know from a variety of polls that the investigation isn’t a priority for voters on either side, who are far more likely to list health care and the economy as major issues. And we also know that impeachment proceedings seem unlikely, as Speaker Nancy Pelosi signaled last month.

Yes, parts of the report show Mr. Trump in an unflattering light. (He lies to aides, tries to get Mrs. Clinton’s emails and yells at his staff. A lot.) but are Americans really going to read all the fine print?

[Sign up here to get On Politics in your inbox.]

Read more about the Mueller report

• Mr. Barr has played a large part in the report’s release, and has become a target of Democrats. Here are five things to know about him.

• Mr. Mueller did not come to a conclusion on the charge of obstruction. But he left the door open to the possibility that after Mr. Trump leaves office, prosecutors could re-examine the evidence gathered and charge him.

• Democrats running for president reacted to the day’s events, though they mostly focused on Mr. Barr’s news conference Thursday morning.

• Here’s how writers on the left, right and center of the political spectrum responded to report.

To give you a sense of scale, here’s the whole Mueller report on one page.

Were you forwarded this newsletter? Subscribe here to get it delivered to your inbox.

Thanks for reading. Politics is more than what goes on inside the White House. On Politics brings you the people, issues and ideas reshaping our world.

Is there anything you think we’re missing? Anything you want to see more of? We’d love to hear from you. Email us at onpolitics@nytimes.com.