Home » Politics » The Politics of Searching a Former President’s Home

Experts on high-wire investigations say that the Justice Department would have carefully weighed the decision to poke around Mar-a-Lago — and that it might want to tell the public why it was necessary. 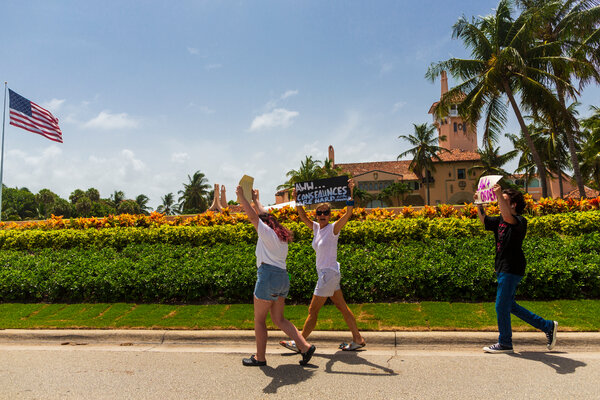 The F.B.I. does not take a decision like searching the private home of a former president lightly.

As Garrett Graff, the author of a biography of James Comey — the F.B.I. director who oversaw the investigation of Hillary Clinton’s email server, then went on to run the Russia inquiry before Donald Trump fired him in 2017 — put it, “This was presumably the highest burden of proof that the Justice Department has ever required for a search warrant.”

As a matter of political sensitivity, he said, the Mar-a-Lago search ranked with the subpoena of Richard Nixon’s secret Oval Office tapes and the decision to sample the DNA on Monica Lewinsky’s infamous blue dress to see if it belonged to President Bill Clinton.

Graff noted that the Justice Department’s “fumbling” of several aspects of its investigation of the 2016 Trump campaign and the controversy over its handling of the Clinton email investigation would probably raise the bar for what might prompt such a high-profile step this time around.

Christopher Wray, the director of the F.B.I., Attorney General Merrick Garland and their top deputies would be well aware of the minefields involved — including the possibility, as Trump proved on Monday when he announced the search in a news release, that it would draw the department into the very sort of political maelstrom Garland has sought to avoid.

All of that suggests the investigation is both serious and fairly well advanced.

In May, Garland reissued the department’s traditional guidance on politically sensitive investigations — and he kept the language approved by his predecessor as attorney general, Bill Barr. That move led someone to leak the memo to Rachel Maddow of MSNBC, who criticized Garland for sticking with Barr’s policy.

Former Justice Department officials said the search fell into a gray area, as Trump is not officially a candidate for anything at the moment. The policy, moreover, applies only to the coming midterm elections, not to the 2024 presidential election.

But that’s just the technical, legal side of this move. Politics is another story.

There are a few hints that Trump thinks — with some justification — that the search will help him secure the Republican nomination in 2024. First, he announced it himself. Second, Republicans have already rallied to his side. Third, there’s no sign that any of his putative rivals in the shadow G.O.P. primary are ready to throw him overboard just yet, which suggests that they fear crossing him.

Consider Ted Cruz, who ran against Trump in 2016 and might do so again in 2024. On Tuesday afternoon, Cruz sent a text message to his supporters calling the search “a raw abuse of power.” He also accused the F.B.I. of becoming “the Democrat Party Police Force.” For good measure, he threw in a fund-raising link.

News of the search is probably not helpful to Representative Liz Cheney of Wyoming, either. She has a tough primary next Tuesday, which she is widely expected to lose. Given Cheney’s role as vice chairwoman of the Jan. 6 committee, it’s likely many G.O.P. base voters will associate her with the F.B.I. search.

As far as we know, however, that would be a mistaken impression; there’s no reason to think the bureau’s investigation has anything to do with Jan. 6, let alone with Cheney herself.

Cheney’s opponent, Harriet Hageman, isn’t worried about the nuances. She tweeted this morning, in a tone that could have been written by the 45th president himself:

If the FBI can treat a former President this way, imagine what they can do to the rest of us. It’s a 2-tiered justice system – one for elites & another for their political enemies. Like sending 87k IRS agents to harass citizens. Or the J6 committee. Political persecution!

In February 2021, when Garland testified before the Judiciary Committee ahead of his confirmation vote, he began his remarks by observing that “the president nominates the attorney general to be the lawyer — not for any individual, but for the people of the United States.”

He added, in case anyone didn’t get the message, that he wanted to “reaffirm that the role of the attorney general is to serve the rule of law.”