Home » Politics » The Subject Was Supposed to Be Energy, but Trump’s Visit to a Chemical Plant Seemed More Like a Rally

MONACA, Pa. — President Trump’s appearance on Tuesday at the site of a multibillion-dollar chemical plant under construction here was ostensibly about energy policy.

Instead, the crowd of mostly white, male workers in bright orange and yellow construction vests was the audience for a 67-minute speech that was nearly indistinguishable from something that Mr. Trump would deliver at one of his campaign rallies.

Mr. Trump railed against China, President Barack Obama, the lawsuits he is facing, the money he claims being president has cost him, Hillary Clinton, Democrats running against him and, as always, his news coverage.

The president occasionally touched on energy policy as he claimed credit for one of the largest active construction projects in the United States, the Shell Pennsylvania Petrochemicals Complex. The plans for the complex, which will convert natural gas into plastics, were in fact announced in 2012, while Mr. Obama was in office.

Still, Mr. Trump insisted that the state had the best “numbers” in its history, although he did not specify which numbers. “This would’ve never happened without me” and his voters, the president told the crowd.

“I’m going to speak to some of your union leaders to say, I hope you are going to support Trump,” he said. “O.K.? And if they don’t, vote them the hell out of office because they are not doing their job. It’s true. Vote them out of office.”

He talked about his time as a real-estate developer and said he enjoyed working with the Teamsters union. He applauded Rick Perry, the secretary of energy, and Andrew Wheeler, the Environmental Protection Agency administrator, both in the audience, for dismantling the obstacles that can stop projects similar to the one under construction in Pennsylvania. Mr. Trump also praised fossil fuels and attacked those he said were trying to curtail their use.

In spite of “all of this exceptional progress, however, some politicians in this country still want to keep America’s vast energy treasures buried deep underground, let other nations take advantage of our country,” the president said. “Not happening anymore.”

At another point, he said, “Democrats in Congress are pushing hard for the Green New Deal,” referring to the congressional resolution that lays out a grand plan for tackling climate change that Republicans have denounced.

“How about that one?” he said. “Where it puts everyone in this room out of work, I hate to tell you, a lot more people. Everybody out of work.” 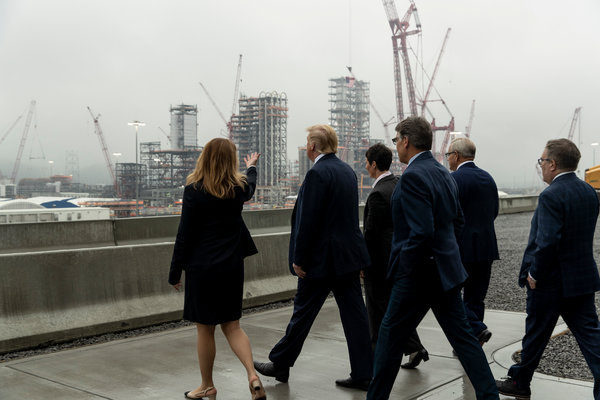 Mr. Trump singled out former Vice President Joseph R. Biden Jr. and Senator Elizabeth Warren of Massachusetts, two of the Democratic contenders for the 2020 presidential nomination who are leading polls in the primary, and said: “I don’t think they give a damn about western Pennsylvania. Do you? I don’t think so.”

The president praised the jobs the Royal Dutch Shell plant would create — about 600 full-time workers will be needed to operate it when it is complete and more than 6,000 workers will build it — along with the benefits that would be offered.

Once construction is complete, the 386-acre ethane cracker plant will produce more than a million tons of plastic. Shell says the plastic from the plant can be used to create fuel-efficient cars and medical devices.

Still, protesters argued that the plant was a threat to the environment and to people’s health. Several groups gathered at the Beaver County Courthouse before the president’s remarks to express their concerns that the plant will produce more than a million tons of plastic, in the form of tiny pellets, at a time when there is increasing concern about plastic debris in the oceans and recycling continues to falter in the United States.

“The Shell plant you are visiting today will erase 30 years’ worth of air quality improvements if it begins operating,” a number of environmentalist and activist groups wrote in a letter to Mr. Trump urging that he stop supporting the plant and the industry as a whole.

Asked by reporters earlier in the day about plastic pollution, the president said that much of it is entering into the ocean from Asia.

He also told reporters it was simply “a retweet” when he highlighted on Twitter an unfounded conspiracy theory that suggested that Bill and Hillary Clinton, the former president and first lady, were linked to the death of Jeffrey Epstein, the convicted pedophile. Mr. Epstein was found dead on Saturday of an apparent suicide in a federal prison in Manhattan as he awaited new charges.

“I have no idea,” Mr. Trump said, when asked whether he truly believed that the Clintons had something to do with the death of Mr. Epstein, who was once a friend of both Mr. Trump and Mr. Clinton.

The trip was the president’s 13th visit to Pennsylvania, which was a critical state for Mr. Trump in 2016 and will be again in 2020. David Urban, a senior adviser to Mr. Trump’s 2016 campaign who was instrumental in helping him win Pennsylvania, was spotted on Air Force One when Mr. Trump arrived in Pittsburgh from his golf club in Bedminster, N.J., where he is on vacation.

The president was supposed to visit the plant last week but did not because of the two mass shootings in Dayton, Ohio, and El Paso.

U.S. diplomats to star in public impeachment hearings next week