“Let us in!” House Republicans staged a protest outside a closed-door deposition, stalling the testimony. Schiff summoned the sergeant-at-arms to disperse them.

About two dozen House Republicans, chanting “Let us in! Let us in!” tried to storm the secure room where a Defense Department official arrived Wednesday morning to testify in the impeachment inquiry, refusing to leave even after they were turned back by Representative Adam B. Schiff, Democrat of California and the chairman of the House Intelligence Committee that was leading the deposition. 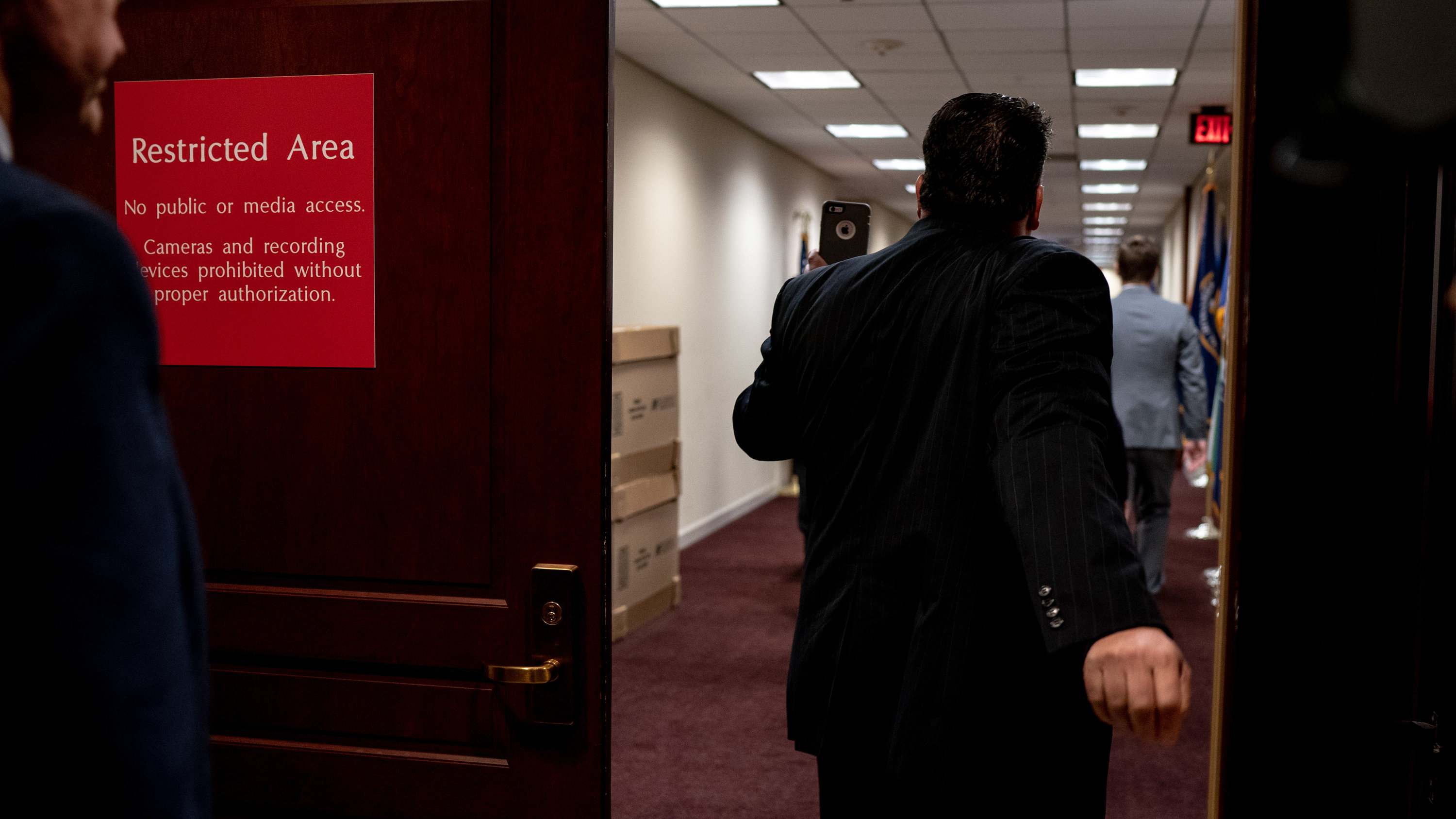 The lawmakers — most of whom do not sit on the committees conducting the inquiry and are therefore not entitled to attend its hearings — said they were protesting the closed-door nature of the proceedings, which have been open to members of both parties who sit on the committees. The private question-and-answer sessions have produced a stream of compelling testimony from government witnesses, much of it confirming and expanding on the intelligence whistle-blower complaint that touched off the impeachment inquiry.

The chaotic scene in the bowels of the Capitol unfolded as the panel was getting ready to hear from Laura K. Cooper, the deputy assistant secretary of defense for Russia, Ukraine and Eurasia, and halted the session. Mr. Schiff summoned the sergeant-at-arms to disperse the uninvited Republican guests, some of whom brought cellphones, which are forbidden in the secure suite.

“Sit in, stand in, call it what you want,” Representative Harley Rouda, Democrat of California, said as he emerged, frustrated, from the room.

Republicans are hammering Democrats for limiting attendance at the hearings to members of the Intelligence, Judiciary and Foreign Affairs Committees. It is common practice for sensitive congressional investigations to be conducted behind closed doors, at least in their preliminary stages. House Republicans did just that when they controlled the chamber and opened an inquiry into the 2012 attack on the United States embassy in Benghazi, Libya.

Democrats have said they plan to hold open hearings after the committees finish deposing witnesses, and that they intend to make public complete transcripts of witness testimony after they have been reviewed to determine whether they contain any classified material. Democrats argue that, lacking any defense of the substance of Mr. Trump’s actions, Republicans are attacking them over process.

In a news conference before they tried to barge in, Republicans demanded access to the transcripts, denouncing the inquiry before news cameras in hyperbolic terms. 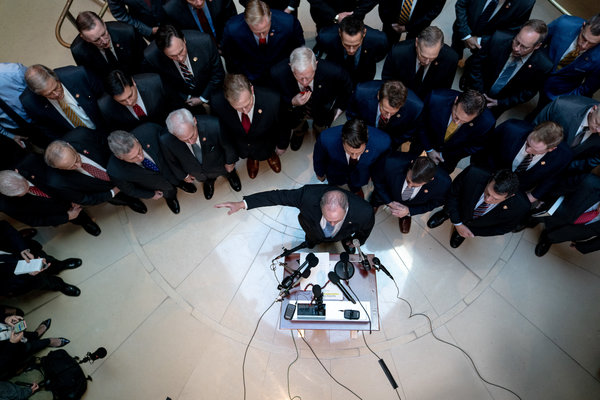 Representative Jim Jordan, Republican of Ohio and the top Republican on the House Oversight Committee, said the demonstration was indicative of a broader frustration with the closed-door interviews.

“It’s finally reached a point where members just said they’re so frustrated at the idea that they can’t be a part of this and see what’s going on,” he said. “So we’re at a standstill.”

Representative Ted Lieu, Democrat of California, accused the protesting Republicans of trying to stymie the investigation. He said it was unclear if ethics violations would be filed against the members who brought phones into the secure room.

“They violated House rules by trying to crash committees which they don’t sit on,” he said. “All this is an attack right on the investigation, and so when you don’t have law or the facts, you attack and disrupt the process.”

The first Defense Department official to testify in the inquiry arrived on Capitol Hill this morning.

Laura Cooper, a top Defense Department official overseeing Ukraine policy, arrived Wednesday morning on Capitol Hill, where she slipped wordlessly into the secure room where lawmakers are interviewing witnesses as part of the House impeachment inquiry into President Trump.

Ms. Cooper, the deputy assistant secretary of defense for Russia, Ukraine and Eurasia, ignored reporters’ questions about whether she had come under subpoena. She arrived accompanied by a bevy of officers in uniform.

Ms. Cooper is appearing despite the Defense Department’s announcement that it would not comply with a House subpoena to provide investigators documents related to the inquiry, and to Mr. Trump’s decision to hold up military aid to Ukraine.

But as of midday on Wednesday, three hours after arriving, she had not yet begun to testify because of the Republican protest of the impeachment inquiry unfolding in the secure suite of the House Intelligence Committee.

Despite Trump’s claims, Ukraine knew its aid had been frozen before it became public.

President Trump began another day assailing the impeachment inquiry, taking aim at the account delivered behind closed doors on Tuesday by William B. Taylor Jr., the top United States diplomat in Ukraine. In his testimony, Mr. Taylor tied Mr. Trump directly to an effort to withhold both military aid and a White House meeting from Ukraine until the Ukrainian president publicly announced that his country was investigating Democrats.

On Twitter, Mr. Trump approvingly quoted a Republican member of Congress saying neither Mr. Taylor nor any other witness had “provided testimony that the Ukrainians were aware that military aid was being withheld.”

But in fact, word of the aid freeze had gotten to high-level Ukrainian officials by the first week in August, according to interviews and documents obtained by The New York Times.

The timing of the communications about the issue, which have not previously been reported, shows that Ukraine was aware the White House was holding up the funds weeks earlier than United States and Ukrainian officials had acknowledged. And it means that the Ukrainian government was aware of the freeze during most of the period in August when Mr. Trump’s personal lawyer, Rudolph W. Giuliani, and two American diplomats were pressing President Volodymyr Zelensky of Ukraine to make a public commitment to the investigations being sought by Mr. Trump.

Mr. Taylor told the impeachment investigators that it was only on the sidelines of a Sept. 1 meeting in Warsaw between Mr. Zelensky and Vice President Mike Pence that the Ukrainians were directly told the aid would be dependent on Mr. Zelensky giving Mr. Trump something he wanted: an investigation into Burisma, the company that had employed Hunter Biden, former Vice President Joseph R. Biden Jr.’s son.

The Ukrainians appear to have initially been hopeful that the problem could be resolved quietly and were reluctant to risk a public clash at a delicate time in relations between the two nations.

Among the documents House Democrats are requesting are summaries of key executive branch meetings, diplomatic cables about Mr. Trump’s decision to freeze $391 million in security assistance for Ukraine, and texts, emails and other records created as Mr. Trump and his allies sought to pressure Ukraine into undertaking investigations into his political rivals.

“These documents include information central to the inquiry’s core area of investigation: the president’s efforts to press Ukraine to initiate investigations that would benefit his personal and political interests, and not the national interest,” the three Democrats wrote.

In keeping with confidentiality rules around the investigation, the three Democrats did not specifically identify the documents in question, but they appeared to match descriptions of records referenced in recent days by key witnesses.

On Tuesday, William B. Taylor Jr., the top American diplomat in Ukraine, told the committees that he kept detailed notes of his time in Kiev that allowed him to recreate a damning portrait of events in his testimony. He also referenced memos, including a June 30 account of his conversation with the Ukrainian president, that could provide new avenues of investigation for Democrats if they get their hands on them. He also referenced a late-August cable he composed “describing the ‘folly’ I saw in withholding military aid to Ukraine at a time when hostilities were still active.”

A lawyer for Gordon D. Sondland, the ambassador to the European Union, indicated before his deposition with investigators that he had produced communications and other records to the State Department that he hoped would be handed over to investigators. They were not.

Another former State Department official told investigators that one of his former colleagues, George Kent, had written a memo documenting an early October meeting with a State Department lawyer about how to respond to the impeachment inquiry that had alarmed him.

The Democrats did not put a due date on their request, and for now have chosen not to issue a subpoena. The State Department defied an earlier, broader subpoena to the State Department for a swath of potential records related to the case. But it may be more difficult for the department to justify this more narrow request, particularly given the political pressure created by the testimony from Mr. Taylor, Mr. Sondland and others.
— Nicholas Fandos

House Democrats hope to corner Republicans by holding a vote on a bill to combat foreign interference in U.S. elections.

House Democrats plan to try to put Republicans on the spot on Wednesday over whether it is appropriate for a president to solicit foreign help with in an American election, scheduling a vote on a bill to combat foreign election interference.

The leaders of the Democratic-led chamber have scheduled action on the SHIELD Act, a measure that would require candidates to tell law enforcement authorities of any efforts to influence United States elections by foreign governments and those acting on their behalf. It would also close loopholes that allow foreign governments and foreign nationals to spend money in American elections.

House Republicans are already crying foul, and citing an unlikely ally — the American Civil Liberties Union — which has warned that the legislation sweeps “too broadly” and covers “more speech than necessary to achieve its legitimate goals.”

Senator Mitch McConnell of Kentucky, the majority leader, signaled the Senate will not take up the measure, arguing on Wednesday it would “expand government’s control over America’s political speech.”

It is the latest piece of legislation House Democrats have brought forth in an attempt to squeeze Republicans. They had also planned to force a vote on legislation opposing President Trump’s decision to hold an upcoming Group of 7 Summit of world leaders at his resort in Doral, Fla., but scrapped it after the president scrapped the plan.

Another wealthy Trump donor faces charges of financial crimes. It could have ripple effects into investigations of Mr. Trump’s inauguration.

Imaad Zuberi, a California venture capitalist who has donated heavily to politicians of both parties, is expected to plead guilty to violating a range of tax and finance laws. Since 2016, Mr. Zuberi has been a major donor to President Trump’s inaugural committee and the Republican Party.

Should Mr. Zuberi cooperate with prosecutors, he could add another layer of detail to investigations into Mr. Trump’s inauguration, which is already facing scrutiny over whether foreigners illegally donated money in hopes of buying influence.

Catch up on impeachment: What you need to know about the inquiry.

A C.I.A. officer who was once detailed to the White House filed a whistle-blower complaint on Mr. Trump’s interactions with Mr. Zelensky. Read the complaint. 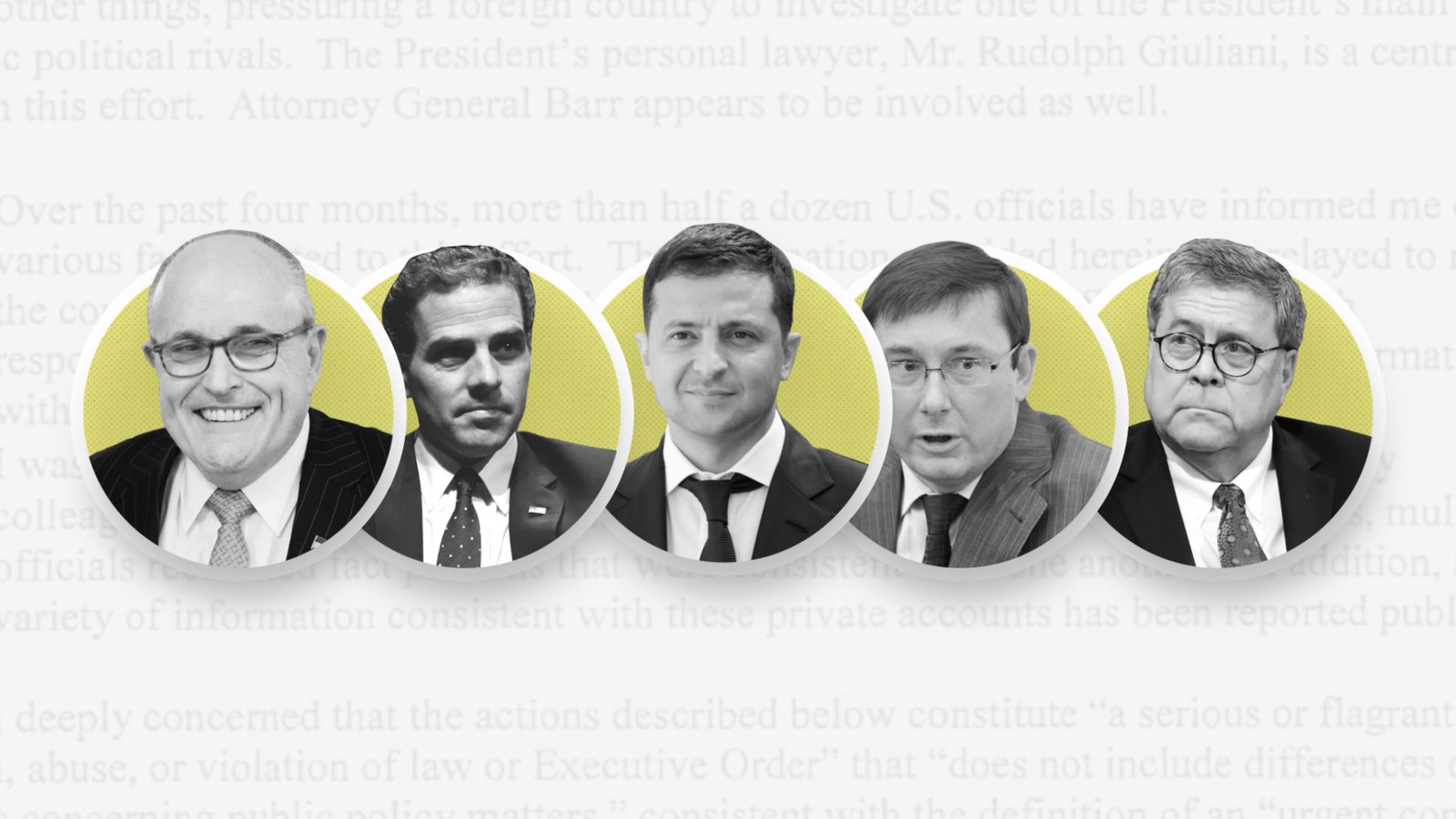 Speaker Nancy Pelosi announced in September that the House would open a formal impeachment proceeding in response to the whistle-blower’s complaint. Here’s how the impeachment process works and here’s why political influence in foreign policy matters.

House committees have issued subpoenas to the White House, the Defense Department, the budget office and other agencies for documents related to the impeachment investigation. Here’s the evidence that has been collected so far.

An earlier version of this article misstated the home state of Representative Andy Biggs. It is Arizona, not Kentucky.

In Trump's impeachment, four months, 28,000 pages and one loose end