Home » Politics » ‘There Was a Big Battle in Here’: Lawyers Tour Capitol as a Crime Scene

WASHINGTON — “This is the speaker’s lobby,” said Thomas Loyd, the Capitol Police inspector, his voice rising so those in the back could hear. “This is where the shooting took place.”

The two dozen defense lawyers in front of him — who represented some of the 400 people charged in connection with the mob attack on the Capitol on Jan. 6 — stopped chatting, looked around the carpeted corridor outside the House chamber and started taking notes.

It was the latest bizarre scene in a Congress still reeling from the most violent attack on the Capitol in centuries: a court-ordered crime scene tour.

Federal prosecutors announced last week that they would open the building to five tours for defense counsel over the next month. In criminal cases, crime scene walk-throughs are typically associated with a shallow grave or a creek in the woods where a body is found. But they are unfolding in the ornate quarters of Congress, more recognizable as the backdrop for State of the Union addresses and legislative debates than for violent crimes.

The tours, which began on Monday and end in June, are led by police officials and give the defense lawyers a look at the corners of the building made famous during the assault, mostly via amateur cellphone videos circulated on social media and television.

There is the speaker’s lobby, where an officer shot and killed Ashli Babbitt as she tried to storm the House chamber. The chamber itself, were lawmakers put on gas masks and barricaded themselves inside as the mob beat on the door. Speaker Nancy Pelosi’s office suite, where rioters vandalized property and posed for photographs. A rounded hall known as the crypt, one floor beneath the Rotunda, that was the site of a long struggle between the mob and the police.

“There was a big battle in here,” Inspector Loyd said, waving the lawyers toward a staircase to the crypt. “You can take pictures.” 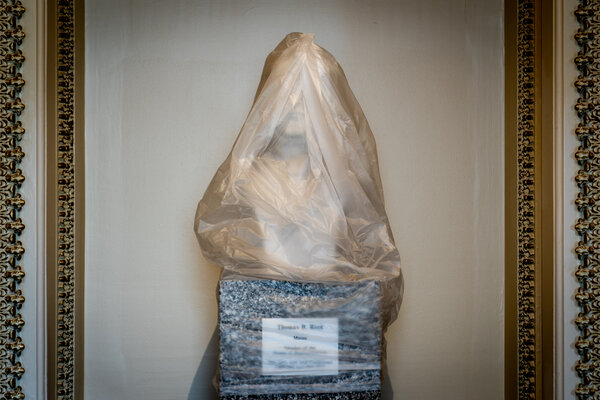 In many ways, life at the Capitol is moving on from the deadly attack on Jan. 6. An uneasy détente between Republicans and Democrats has emerged in some quarters as limited bipartisan talks have resumed. Bills with no chance of passing are once again being introduced. Petty squabbles over slights have re-emerged.

But the two-hour Capitol tour on Monday was another reminder of the lasting ramifications of an assault that injured 140 officers and killed five. Those charged with being involved hail from across the country — 43 states and the District of Columbia — evidence of how far former President Donald J. Trump’s false claims and lies about widespread voter fraud in the 2020 election spread in the buildup to the assault.

Organizers did not respond to an advance request from The New York Times to cover one of the tours. But a reporter witnessed one in progress on Monday in public areas of the Capitol and was able to see and hear much of it. Wearing a press badge, he did not identify himself and was not asked to do so.

The tour guide had firsthand knowledge of the events on Jan. 6, when he was on duty; an internal memo later praised Inspector Loyd, the commander of the department’s Capitol Division, for fighting “shoulder to shoulder” with the rank and file.

The inspector “did not retreat inside the building to attempt to ‘lead’ from his office,” according to a memo written by members of the division. “He did not stay back, away from the line, to avoid any physical conflict, but rather pulled officers off the line and took their place so they could receive medical attention.”

As he led lawyers through the building on Monday, Inspector Loyd showed them the spot where a police officer was crushed in a door and where rioters climbed exterior walls to break in. He pointed out which windows were broken and which doors breached. He showed his tour group where Senators Chuck Schumer and Mitt Romney had fled, narrowly avoiding coming face to face with members of the mob.

“You may have seen video of a guy using a shield to break in. That happened right down there,” Inspector Loyd said, pointing toward the Senate wing of the building.

He referred to different parts of the battle as a “last stand” for different wings of the complex and said the parliamentarian’s office had sustained the worst damage. As a normal tour guide would, Inspector Loyd also pointed out the historic nature of the events that the group had seen unfold on television, including the aftermath of the riot, when National Guard troops were deployed to protect the Capitol.

“We haven’t had soldiers sleeping in the Rotunda since the War of 1812,” he said.

While much of the walk-through was routine, there were dramatic moments in Inspector Loyd’s retelling, including his account of the heroism of Officer Eugene Goodman, who was credited with saving the lives of members of Congress on Jan. 6.

“Officer Goodman leads them up the stairs, he pauses, and he continues to lead them on,” the inspector said as the group stood near the Senate chamber. “This is where Officer Goodman makes sure everyone, including the vice president, is safe.”

In laying out the rules for the tour in a letter last week, Emory Cole, an assistant U.S. attorney, told lawyers that they were not allowed to bring guests or take photographs, unless approved by the Capitol Police.

“Questions about the events of Jan. 6 will not be permitted,” Mr. Cole wrote.

Some lawyers on the tour asked to see the offices of certain senators. Others wanted to photograph the riot shields that still lean against the wall in a hallway. (That request was denied.)

Some members of the group marveled at what they were witnessing, calling it an experience they had never imagined. When a lawyer asked Inspector Loyd about the breaches, he explained how rioters had broken multiple widows and entrances at several wings seemingly simultaneously.

EU superstate: All members should unite and form ‘one economic nation’ says expert

Brexit warning: Boris told NOT to sell out UK fishing to EU – ‘Voters will unleash fury’