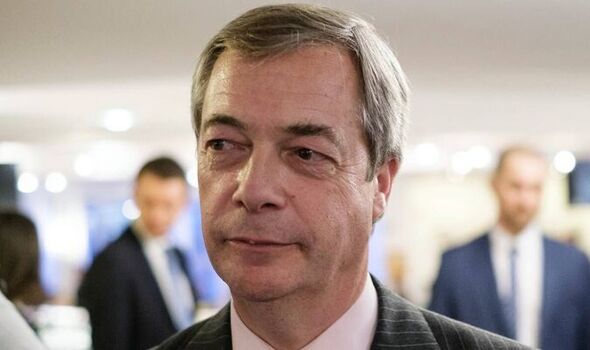 Tories warned that the Government needs to get a grip on illegal entry to the UK to stop Reform UK growing in popularity. A senior Conservative was in no doubt about how to tackle the electoral threat.

He said: “Deal with small boats. If we do our day job the problem goes away.”

A Tory MP pushed for action to bring down both illegal and legal immigration, saying: “The Conservative party just needs to wake up and smell the coffee… It’s only going to get worse.”

Craig Mackinlay, a former Ukip deputy leader who became the Conservative MP for South Thanet when he beat Mr Farage in the 2015 election, warned that the likes of Reform UK emerge when mainstream parties allow a “vacuum to develop”.

He said: “I recognise it and am doing all I can to ensure it is us that speaks for those disaffected voters. We’ve done it before and we need to do it again.”

Mr Farage, Reform UK’s honorary president,  told the Sunday Express that “confidence in the Tory party has collapsed” and claimed that “Brexit is back on the agenda”.

The veteran Brexiteer was not concerned that by standing in every seat in Great Britain Reform UK could deny the Conservatives a majority and allow Labour to take power.

He said: “So what? What difference would that make?”

Mr Farage accused the Government of staging a “war against small business” and described the Conservatives as a party “obsessed with itself and not the country”.

Hailing Reform UK’s polling success, he said: “I think this may well be the beginning of the next insurgency.”

There is strong speculation he may re-enter the political arena.

He said: “I’m very much involved. Whether I decide to get rid of the life I’ve got and go back to all of that again remains to be seen.”

Party leader Richard Tice claimed the Conservative MPs are “terrified” by the rise of Reform UK.

He said: “It’s very simple. People are realising that the Tories are betraying Brexit.

“They have lost control of both legal and illegal immigration. They have basically declared open borders for both, and they are taxing working people to the hilt.”

The Brexit Party did not stand against Conservatives in Tory-held seats in 2019. But Mr Tice dismissed doing a deal with the Conservatives.

He said: “I don’t want to do deals with them, I want to crush them.”

Lord Robert Hayward, a Conservative peer and respected election analyst, said it is not only Conservatives who back Reform UK, with the party “picking up Brexit-orientated people who are disaffected with immigration, small boats etc.”

He said: “We are facing a degree of political flux which I’ve not seen in my lifetime.”

Other polls have been less positive for Reform UK, with Redfield & Wilton putting the party on three percent.

Paul Emberry, a former senior official with the Fire Brigades Union, expected Reform UK would pose the greatest threat to the Conservatives because of the “sense the Government has just lost control, especially on things like immigration”.

But he added that voters in the “red wall” seats who have not yet swung back to Labour could back Reform UK.

A former cabinet minster pinned his hopes of the Conservatives staying in power on falling gas prices which would allow the Government to make tax cuts.

He said: “I would say the chances of winning are one in five. If gas prices continue to fall and the ripples in supply chains sort themselves out, the Treasury will have some money to spend next year.”