Home » Politics » Trump: Deal with Kim Jong-un 'in the making'

US president says Kim offered talks on denuclearisation and promised to halt missile testing during negotiations. 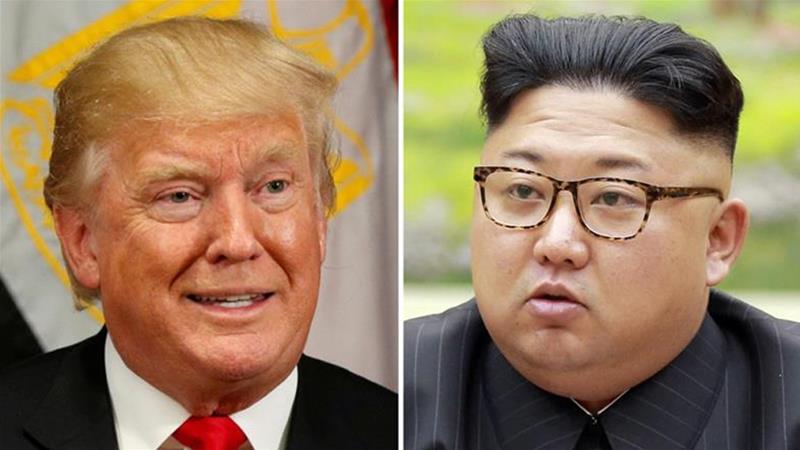 US President Donald Trump has said a deal with North Korea’s Kim Jong-un is “very much in the making,” a day after he revealed he agreed to meet the North Korean leader for face-to-face talks.

“The deal with North Korea is very much in the making and will be, if completed, a very good one for the World. Time and place to be determined,” Trump said on Twitter on Saturday.

The meeting would be a first between a sitting US president and a North Korean leader, and comes after a months-long diplomatic standoff that saw the two leaders exchange fiery military threats and personal insults.

“Administration officials have said she was only emphasising the consequences should North Korea continue or resume nuclear missile testing or interfere with the joint missile testing between the US and South Korea.

“But this confusion underscores the developments that have occurred with Trump leaping head first into face-to-face negotiation with Kim Jong-un. Many have expressed concern that negotiations such as these begin from the bottom-up, that a face-to-face meeting between leaders comes at the end of a process, not at the very beginning,” our correspondent said.

“In addition, some experts point out that the North Koreans have decades of experience with various states, while the Trump administration is ‘new to the game’.

“They say Trump is going to be at a disadvantage in any negotiation with the North Koreans and they shouldn’t take place from the very beginning.”

The agreements, which follow a flurry of cooperative steps taken by the Koreas during last month’s Pyeongchang Winter Olympics, have brightened prospects for a dialogue between North Korea and the US over the North Korea’s nuclear programme.

South Korea’s President Moon Jae-in praised the Winter Games for setting the stage for a detente between the rival Koreas, adding that he hopes it will “create a new world peace”.

Meanwhile, German Chancellor Angela Merkel was among the world leaders to hail the announcement as a “glimmer of hope,” saying North Korea’s nuclear drive “has been a source of great concern for all of us.”

Pyongyang’s long race to develop a nuclear weapon capable of reaching the United States has proved a problem for successive US administrations.

Trump has previously ridiculed Kim as “Little Rocket Man,” slapping wide-ranging bilateral sanctions on the Pyongyang regime and also leading a drive for international sanctions through the UN.

Lisa Nandy sparks outrage with Union Jack jibe at ministers ‘You were happy with EU flag!’