President Trump doled out clemency to a new group of loyalists on Wednesday, wiping away convictions and sentences as he aggressively employed his power to override courts, juries and prosecutors to apply his own standard of justice for his allies.

One recipient of a pardon was a family member, Charles Kushner, the father of his son-in-law, Jared Kushner. Two others who were pardoned declined to cooperate with prosecutors in connection with the special counsel’s Russia investigation: Paul Manafort, his 2016 campaign chairman, and Roger J. Stone Jr., his longtime informal adviser and friend.

They were the most prominent names in a batch of 26 pardons and three commutations disclosed by the White House after Mr. Trump left for his private club in Palm Beach, Fla., for the holiday.

Also on the list released on Wednesday was Margaret Hunter, the estranged wife of former Representative Duncan D. Hunter, Republican of California. Both of them had pleaded guilty to charges of misusing campaign funds for personal expenses.

Mr. Hunter was pardoned by Mr. Trump on Tuesday, as part of a first pre-Christmas wave of grants of clemency to 20 convicts, more than half of whom did not meet the Justice Department guidelines for consideration of pardons or commutations. They included a former Blackwater guard sentenced to life in prison for his role in the killing of 17 Iraqi civilians in 2007.

Of the 65 pardons and commutations that Mr. Trump had granted before Wednesday, 60 have gone to petitioners who had a personal tie to Mr. Trump or who helped his political aims, according to a tabulation by the Harvard Law School professor Jack Goldsmith. Although similar figures do not exist for previous presidents, legal experts say that those presidents granted a far lower percentage to those who could help them personally and politically.

The pardons to Mr. Manafort and Mr. Stone on the same day will be particularly stinging for the former special counsel Robert S. Mueller III and his team. 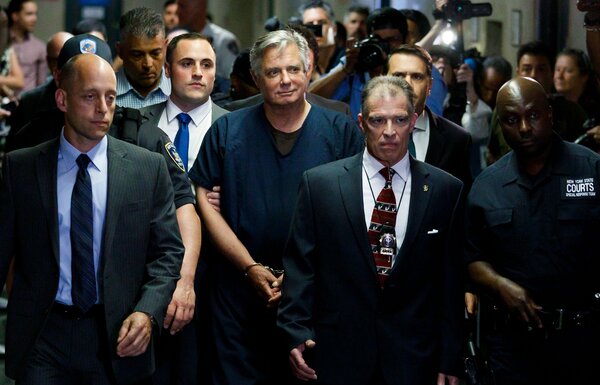 Mr. Trump’s lawyer at the time, John Dowd, was said to have broached the topic of pardons with lawyers for Mr. Manafort in 2017. At the time, Mr. Manafort was considering whether to cooperate with prosecutors, who believed that if there had been a connection between Russian officials and the Trump campaign that Mr. Manafort or Mr. Stone would have known about it. Mr. Trump later expressed explicit support for Mr. Stone’s refusal to speak with investigators.

Neither man ever fully cooperated with prosecutors despite entering guilty pleas, leaving investigators to believe that private discussion of pardons and public statements by Mr. Trump may have compromised their ability to uncover the facts.

The pardons for Mr. Manafort and Mr. Stone reflected Mr. Trump’s grievances about the Mueller investigation, referring to the “Russian collusion hoax,” “prosecutorial misconduct” and “injustice.”

Mr. Manafort, 71, had been sentenced to seven and a half years in prison for his role in a decade-long, multimillion-dollar financial fraud scheme for his work in the former Soviet Union.

Mr. Stone, 68, whose 40-month prison sentence had previously been commuted by Mr. Trump, has maintained his innocence and insisted there was prosecutorial malfeasance. He was convicted on seven counts of lying to Congress, witness tampering and obstructing the House inquiry into possible Trump campaign coordination with Russia.

Mr. Kushner’s pardon has been one of the most anticipated of the Trump presidency. The father-in-law of the president’s older daughter, Ivanka Trump, Mr. Kushner’s prison sentence was a searing event in his family’s life.

Mr. Kushner, 66, pleaded guilty in 2004 to 16 counts of tax evasion, a single count of retaliating against a federal witness and one of lying to the Federal Election Commission in a case that was also a lurid family drama. He served two years in prison before being released in 2006.

The witness he was accused of retaliating against was his brother-in-law, whose along with his wife, Mr. Kushner’s sister, was cooperating with federal officials in a campaign finance investigation into Mr. Kushner.

In his plea agreement, Mr. Kushner acknowledged that he arranged to have a prostitute seduce his brother-in-law in a motel room in New Jersey where video cameras were installed. Mr. Kushner then had the videotape sent to his sister.

The case was prosecuted by then-U.S. Attorney Chris Christie, a longtime Trump friend who went on to become governor of New Jersey. Mr. Christie has recently been critical of Mr. Trump’s efforts to claim widespread fraud in the 2020 election results without offering proof.

Jared Kushner worked on criminal justice overhaul efforts in the White House in part because he was scarred, allies said, by his father’s time behind bars. And he had a tense relationship with Mr. Christie for years, helping to banish him from his role in running the transition almost immediately after Mr. Trump’s surprise election win in 2016.

In pardoning Mr. Manafort and Mr. Stone, Mr. Trump continued to chip away at the work of the Mueller investigation, which the president and his departing attorney general, William P. Barr, have attacked for the past two years. Mr. Trump had already pardoned or commuted the sentences of three others who had been prosecuted by Mr. Mueller’s office, including two on Tuesday.

The president has long complained that the investigation was a “witch hunt” and a “hoax” and pressured Mr. Barr to prosecute some of the officials he blamed for it, including Joseph R. Biden Jr., former President Barack Obama and James B. Comey, the F.B.I. director whom Mr. Trump fired.

Mr. Barr, whose last day in office was Wednesday, has echoed Mr. Trump’s criticism of the investigation and ordered an inquiry into its origins, but to the president’s frustration he did not prosecute anyone for it before last month’s election.

The president has long publicly dangled the prospect of pardons for associates caught up in investigations in a way that critics argued amounted to a bid to convince them to keep quiet about any wrongdoing they may have witnessed by Mr. Trump.