WASHINGTON — On the day that President Grover Cleveland left the White House after losing his bid for re-election, his wife, Frances, told the staff to take care of the mansion. “I want to find everything just as it is now when we come back again,” she said. “We are coming back just four years from today.” And they did.

Nearly 128 years after the Clevelands’ triumphal comeback, President Trump is signaling that he may try to become only the second president in American history to win another term after being defeated. Even as he insists that he did not lose the 2020 election, Mr. Trump has been laying plans to run again in 2024 with a kickoff as early as this month or possibly on his successor’s Inauguration Day.

How serious he is remains to be seen. Many allies believe his talk of another run in 2024, when he will be 78 years old, is more about maintaining his relevance, enabling him to raise funds, soothing his wounded pride and trying to shed the label of loser. But even if it is only for show, Mr. Trump’s talk of a 2024 race has already frozen the Republican field and could delay the emergence of a new generation of leaders while keeping the party tethered to the politically polarizing Mr. Trump for months or years to come.

The outgoing president hinted at his ambitions to a crowd of Republican supporters at a White House Christmas party on Tuesday evening in his most overt semipublic comments since losing the Nov. 3 election that he refuses to concede. “It’s been an amazing four years,” he told guests in remarks posted online by a member of the Republican National Committee. “We’re trying to do another four years. Otherwise, I’ll see you in four years.”

If so, it would be only the latest effort by Mr. Trump to defy history and do what few if any have done before. At least a half-dozen former presidents have sought to come back in the past, but none other than Cleveland succeeded, in some cases tarnishing their reputations in the losing effort.

Typically, once voters reject a sitting president, they lose interest and move on to candidates perceived to have a greater chance of success. But Mr. Trump does not appear ready to voluntarily surrender the power and attention of the White House simply to retire to Mar-a-Lago to plan his presidential library.

He has already raised $170 million since Election Day, much of it for a new political organization that can be used to pay for his political activities going forward. He has talked about creating a news media platform that could take on Fox News on the right and keep him part of the national conversation. And he will retain his Twitter bullhorn with 88.7 million followers allowing him to insert himself into any debate any time he likes, a powerful tool that no other defeated president has ever had.

The president’s flirtation with attempting a comeback has already complicated the plans for other Republicans who would like to step up, especially those who feel they owe some loyalty to him, like Vice President Mike Pence, Secretary of State Mike Pompeo and Nikki R. Haley, the former ambassador to the United Nations. 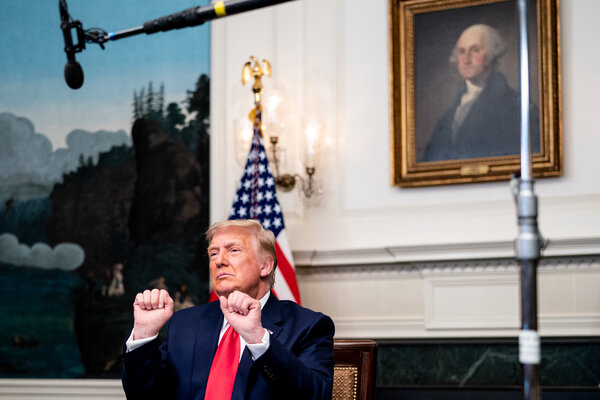 Mr. Trump retains fervent support among many Republicans despite his loss. A poll by Politico and Morning Consult last week found that 53 percent said they would vote for him in a Republican primary in 2024, with Mr. Pence at a distant 12 percent and Donald Trump Jr., the president’s eldest son, at 8 percent. Ms. Haley and others drew 4 percent or less.

“He will be the prohibitive front-runner, especially if he can maintain media attention from Mar-a-Lago,” said Alex Conant, a Republican political consultant. “Nobody is going to want to be the first candidate to announce they’re running against him. Can you imagine the tweet storm that he’ll launch against his first competitor? Any candidate that visits an early state next year will be overwhelmed with questions about their loyalty to Trump.”

But that could fade with time. With Mr. Trump not yet out of the Oval Office and loudly making false claims that the election was somehow stolen from him, he still commands the stage. But some Republicans argue that ultimately he cannot sustain the loyalty he now enjoys within the party given the stigma that comes with having lost the presidency and the exhaustion often expressed by many Republicans.

“It’s hard for a politician to dominate a party for each of the four years after he’s president,” said Michael J. Gerhardt, a constitutional scholar at the University of North Carolina who wrote about Cleveland and other one-term commanders in chief in “The Forgotten Presidents” and testified last year before the House in favor of Mr. Trump’s impeachment. “It’s happened a few times, but it’s rare.”

Moreover, Mr. Trump faces potentially serious challenges after leaving office that may make another run implausible even aside from advancing age. Among other things, he has to find a way to repay or restructure $421 million in debt and he may have legal troubles stemming from multiple investigations at the federal, state and local levels. He has privately been discussing pre-emptively pardoning members of his family before leaving office, not usually a selling point for a future political campaign.

The White House declined to discuss the president’s thinking about 2024, citing his efforts to contest the 2020 results, which have been certified by all of the key battleground states and are on track to being settled by the Electoral College in less than two weeks.

“I’ve not heard any discussions of that,” Kayleigh McEnany, the White House press secretary, told reporters who asked about a 2024 campaign on Wednesday. “I’m aware of the reporting, but the president’s campaign is currently pursuing active litigation, and that is the focus, at least at the moment.”

Other presidents have sought to return to the White House without success. Martin Van Buren, who had lost his bid for re-election in 1840, mounted a new campaign as a Free Soil candidate in 1848, but garnered only about 10 percent of the vote and won no states. Millard Fillmore, another 19th-century one-term president rejected by his own party, likewise tried the third-party route in staging a comeback campaign in 1856 as the nominee of the Know Nothings, winning 22 percent and just one state.

A couple of presidents who left office voluntarily after two terms nonetheless changed their minds and sought to come back four years later without success. Ulysses S. Grant allowed his supporters to promote him for the Republican nomination in 1880, only to see the bid fizzle at the convention, while Theodore Roosevelt bolted his party and ran as head of the new Progressive or Bull Moose Party in 1912, succeeding only in taking down his handpicked Republican successor, William Howard Taft, and turning the White House over to the Democrats.

Herbert Hoover, after being turned out in 1932, held out hope that the Republicans would anoint him as their nominee again in 1936 and 1940 only to be spurned. More recent defeated one-term presidents like Jimmy Carter and George Bush entertained no such fantasies, although Gerald R. Ford did briefly consider becoming a vice-presidential candidate four years after losing the White House.

Cleveland is the only defeated president who ever moved back into the White House. A fiscally conservative Democrat, he won his first term in 1884 despite being accused of fathering a child out of wedlock, making him the nation’s 22nd president. He became the only bachelor president to marry while in the White House when he wed Frances Folsom, who at 21 was 27 years younger than him.

Even though he won the popular vote four years later, he lost the Electoral College to Benjamin Harrison, a Republican, over his support for lowering tariffs on foreign goods. Known for “an inherited strain of stubbornness that gleamed in his clear blue eyes before he was five years old,” as Allan Nevins put it in his Pulitzer-winning biography, Cleveland refused to fade away and beat Harrison in 1892, fulfilling Frances’s prediction and becoming the 24th president.

One important difference between Cleveland and Mr. Trump is that Cleveland won the popular vote in all three presidential elections he ran in, while Mr. Trump lost the popular vote in both 2016 and 2020. “Grover had the advantage of popular support that Trump lacks,” said Matthew Algeo, the author of “The President Is a Sick Man” about secret surgery Cleveland had while in office.

There is little reason to think that Mr. Trump knows much about this history or even cares. Holed up in the White House, he is bruised by his election defeat, lashing out those he blames, advancing fantasy conspiracy theories to explain it away and looking for a way to keep attention focused on himself.

The prospect of running again is one way to do it, whether he goes through with it or not. And when he unhappily and involuntarily strides out of the White House for the last time in the next seven weeks, he can tell the staff to keep everything as it is now because he plans to be back.