(Reuters) – Earl Kerr, a 57-year-old electrical contractor in Jacksonville, Florida, says he fears for his 80-year-old mother, who entered an assisted living facility just before the coronavirus pandemic hit the United States. And he says he worries that the tanking economy will sink his small business. 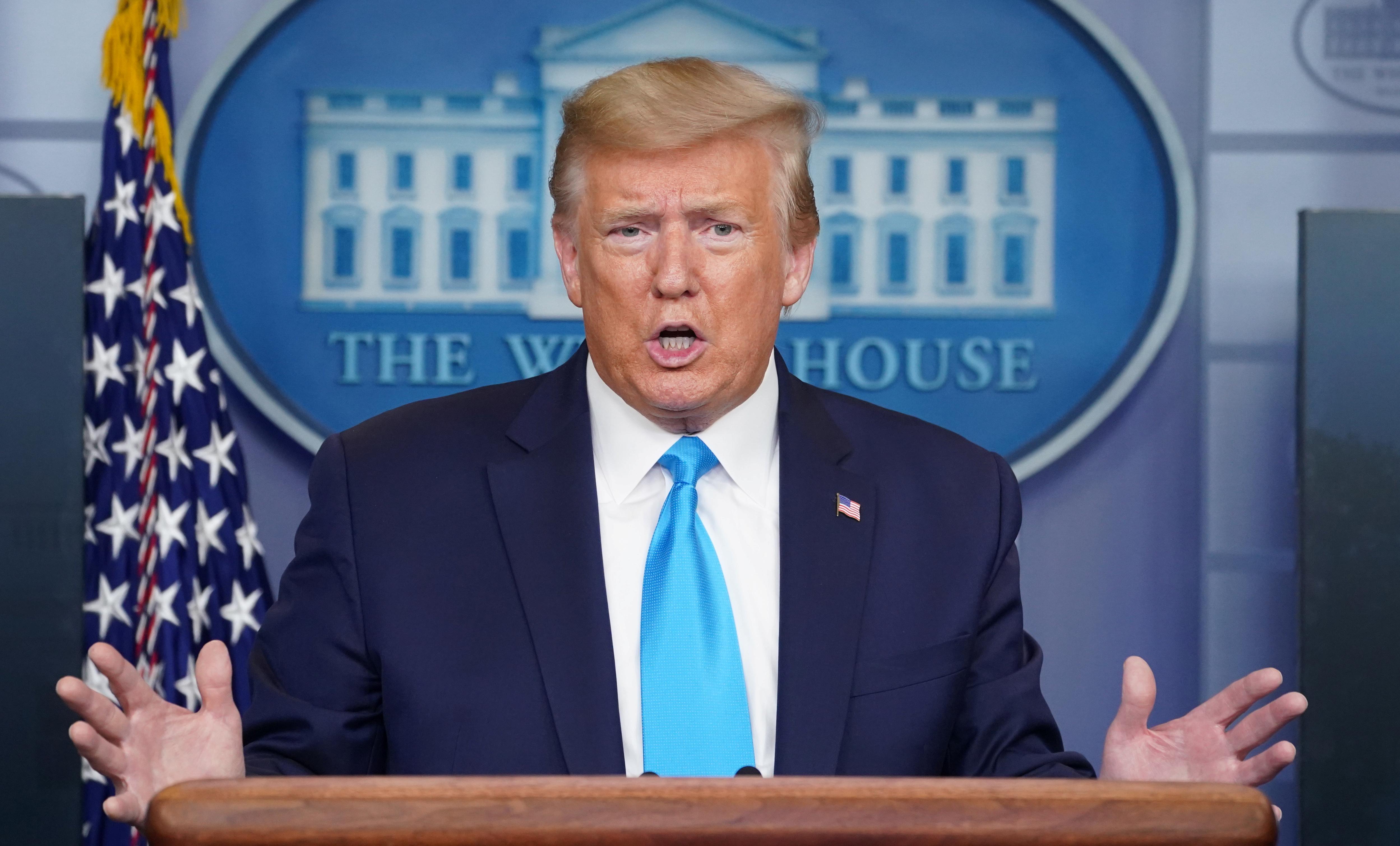 But he has faith in U.S. President Donald Trump to handle the crisis. He’s heard the widespread criticism that Trump initially didn’t take the pandemic seriously, that his administration failed to procure vital medical supplies and left overwhelmed states to fend for themselves. Kerr has a different take.

“He’s not God. He can’t foresee the future or see that the virus can do this or that,” said Kerr, who voted for Trump in 2016 and plans to again in November. “He’s doing the best he can with the information that he gets.”

Continued support from voters like Kerr could prove critical to Trump’s re-election bid – especially because the regions where the president has drawn support often overlap with those most vulnerable to the pandemic, a Reuters analysis shows. The analysis found one in five of Trump’s 2016 voters live in areas where health and economic factors heighten their risks from the coronavirus. Kerr is among 30 voters interviewed by Reuters who live in such at-risk metropolitan areas in Florida, Ohio and West Virginia and who voted for Trump in 2016 or support him now.

The interviews, along with the latest Reuters/Ipsos polling data, show stalwart support among Trump’s political base amid the worst public health crisis in a century, with a rising U.S. death toll that has now surpassed 12,700, predictions of an economic depression, and the U.S. stock market’s biggest first-quarter loss in history. But neither has Trump enjoyed the dramatic gains in popularity that past presidents have sometimes seen during crises, when patriotism often runs high – illustrating a hardening of the bitter partisanship that has been the hallmark of his administration.

Before the pandemic, the president had trumpeted a soaring economy and record-low unemployment to woo the moderate and independent voters he needs to win the election – especially in key battleground states such as Wisconsin, Pennsylvania and Florida. That pitch evaporated in the pandemic, making perceptions of his emergency response all the more crucial. Recent polls in Florida and Wisconsin showed Trump trailing Biden by between three and six points.

Perceptions of crisis response have had a pivotal impact on the popularity of past presidents. The experience of George W. Bush – the last Republican president, also a polarizing figure – provides a vivid example of partisanship breaking down in some of the nation’s darkest times. Bush’s approval rating soared to more than 90% after the Sept. 11, 2001 terrorist attacks, according to Gallup polling. But that figure fell below 40% after Hurricane Katrina in 2005 and bottomed out at 25% during the 2008 financial crisis, helping Democrat Barack Obama beat Republican challenger John McCain in that year’s election.

Trump’s approval rating, by contrast, has remained steady throughout his presidency and has ranged between 40% and 44% since the onset of the U.S. coronavirus crisis in early March, buoyed by the support of 85% of Republicans, according to the latest April 6-7 Reuters/Ipsos poll. That job rating makes November’s election highly competitive, experts say, though the political landscape could shift as the pandemic continues to claim lives and jobs. (For a graphic of the poll results, see reut.rs/39TtJm4)

Trump campaign communications director Tim Murtaugh said voters continue to support the president in part because he acted early, in late January, to restrict travel from China and appoint a coronavirus task force. “He also has an optimistic view of America and wants to get us moving as soon as it is safe, while also listening to the medical experts,” Murtaugh said.

The condemnation of Trump’s response is just as overwhelming among Democrats, nearly 89% of whom disapprove of his job performance, little changed from pre-crisis levels, the poll showed. Independents remain split, with 53% disapproving of the president’s performance and 42% approving.

Trump trails Joe Biden, the Democratic front-runner, even with the publicity advantage Trump now enjoys as he appears in daily briefings while Biden has isolated himself from the disease in his Delaware home, issuing little-noticed commentary. Registered voters supported Biden by 43% to 37%, according to the April 6-7 poll.

Kyle Kondik, a University of Virginia political analyst, said the hyper-partisan divide over Trump limits both his political upside and his downside in the crisis.

“People who predict this president will suffer long-term approval dips have been wrong throughout his presidency,” he said.

‘IT’S NOT HIS FAULT’

Nearly all the Trump supporters interviewed by Reuters said the media and Democrats are unfairly blaming him for a problem that no one could have predicted.

Several still likened the new coronavirus to a seasonal flu – echoing Trump comments early in the crisis – even after the president’s own characterization of the outbreak had changed and his advisers said this virus is 10 times more fatal. The voters interviewed lauded Trump for the $2.2 trillion rescue package passed by Congress. They believe the pandemic’s economic fall-out means that the country needs Trump – a businessman – more than ever to steer it out of doldrums.

Many said he’s doing the best possible job in an impossible situation.

“It’s not his fault that this happened,” Barbara Raccina, 76, of Jacksonville Beach, Florida, who voted for Trump in 2016 and will do so again in November. “I think he’s trying to help as much as he can. The rest is up to us to stay indoors.”

Raccina and the other voters interviewed live in areas that supported Trump in 2016 and are now especially vulnerable to the pandemic. The Reuters analysis identified the areas through data from the U.S. Census Bureau, the Bureau of Labor Statistics and the Centers for Disease Control and Prevention. Reuters examined the percentage of people who smoke, have asthma or other conditions that can raise the risk of dying from COVID-19, the disease caused by the coronavirus. The analysis also factored in economic data including unemployment and the percentage of the local workers in retail, who are likely to lose their paychecks in the pandemic as stores close.

John O’Neill, 61, lives in one of those vulnerable regions – Middletown, Ohio, a metropolitan area Trump won with 56% of the vote in 2016. Middletown has among the nation’s highest percentage of people who smoke, have the lung disease COPD, or have heart conditions, all thought to make COVID-19 more dangerous.

Currently unemployed, O’Neill hopes to find work in a warehouse – a setting with potentially high virus exposure – and has been diagnosed with COPD. He said he’s not concerned about the virus.

O’Neill said he takes comfort from the medical experts advising Trump, such as Anthony Fauci, the nation’s top infectious disease official, who appears alongside the president at televised briefings. Fauci has become something of a cult hero – often praised by commentators with media outlets the president blasts as liberal-leaning because Fauci has publicly contradicted Trump’s assurances that the pandemic was under control.

O’Neill views Fauci as one of the president’s trusted advisors.

“If Fauci and them are telling him, ‘No, we shouldn’t be doing this,’ I’m sure Trump will listen to them,” he said.

GRAPHIC: Reuters/Ipsos poll: Who do you trust on COVID-19? Trump, governors, CDC? – here

‘TRYING TO GIVE US HOPE’

With the crisis still in its early days, Trump’s supporters are mindful of the risk that supporters’ confidence in his crisis response could fade if death tolls mount and stocks continue to tumble.

None of the voters who spoke to Reuters have yet lost a family member to the virus. Compared to other parts of the United States, there have been few confirmed cases in the parts of Florida, Ohio, and West Virginia that Reuters examined, in part because fewer tests are being taken in those areas.

Out of the 30 Trump voters, Reuters found only one whose support has been shaken by the president’s pandemic response – a registered Republican in Cincinnati in his 30s, who asked not to be identified.

After the first U.S. case was reported in January, Trump repeatedly insisted it was nothing to worry about and would disappear “like a miracle.” As recently as late March, Trump suggested scaling back coronavirus restrictions by Easter to revive the economy, before eventually extending social distancing guidelines through April.

The Cincinnati voter said he is considering voting for Biden in November.

Another voter who supported Democratic presidential candidate Hillary Clinton in 2016, however, said she will back Trump this time. Amy Frasure, 32, of southern Ohio’s Lawrence County, runs an advertising agency across the border in West Virginia. She said it makes sense that Trump has provided a more upbeat assessment than state governors, who have to raise the alarm to effectively deal with public health and economic disasters on the front lines.

Trump’s job, she said, is “to make us more comfortable with the fact that there’s something crazy going on.”

Some of those who continue to support Trump said the president could have taken a more serious tone on the pandemic.

“It bothers me a little when (Trump) says everyone should be back to work by Easter, business booming, things like that,” said Mary Cogan, 52, vice-chair of the Republican Party in Lawrence County. “But then… I think he is probably just trying to give our nation hope.”

Cogan, who called Trump’s overall crisis response “awesome,” said every local Republican she knows remains steadfast in their Trump support. She expects the county, where 70% of voters supported Trump in 2016, to back him again.

“He will reign here in Lawrence County,” she said.