Shortly before leaving the White House on Wednesday morning for the Ellipse, where a stage had been set up for him to address supporters, President Trump had a word with Vice President Mike Pence.

Mr. Pence repeated what he had told Mr. Trump a day earlier: that when he went to Capitol Hill in a few hours to oversee the tallying of the electoral votes that would certify Joseph R. Biden Jr.’s victory, he would not have the power to do what the president wanted and overturn the results. Mr. Pence was planning to release a letter soon explaining that.

Mr. Trump listened, and stewed and chastised Mr. Pence as soft. He was somber as he got into the presidential motorcade for the short ride over to the Ellipse, where he made clear in his roughly 70-minute speech that he was furious with Mr. Pence and that he wanted the people gathered on the Mall to go to the Capitol immediately afterward in protest of what he falsely claimed was a stolen election.

With his loyal No. 2 no longer so loyal in his eyes and with Congress poised to spend the day brushing aside the protests he had nurtured about the Electoral College outcome, Mr. Trump urged his supporters to take another step to back him.

“We want to be so respectful of everybody,” Mr. Trump said, before calling his political opponents bad people. “And we are going to have to fight much harder. And Mike Pence is going to have to come through for us, and if he doesn’t, that will be a sad day for our country. Because you’re sworn to uphold our Constitution.”

Calling the outcome of the election “this egregious assault on our democracy,” he said his supporters should “walk down to the Capitol. And we are going to cheer on our brave senators and congressmen and women, and we are probably not going to be cheering so much for some of them. Because you will never take back our country with weakness.”

Mr. Trump did not in fact travel with the supporters he urged to go fight for him; he returned to the White House, and berated aides about how the scene had appeared, before taking to Twitter to attack Mr. Pence for his stand.

Before Mr. Trump took the stage, his personal lawyer, Rudolph W. Giuliani, addressed the crowd and called for “trial by combat” against the Democrats to win the election.

Mr. Trump’s eldest son, Donald Trump Jr., warmed up the crowd by warning of challenges to Republican members of Congress who didn’t back the pro-Trump efforts: “We’re coming for you,” he said.

In urging his supporters to see the routine act of certifying the U.S. election results as an illegal affront against him and against them, Mr. Trump helped set in motion hours of violence and chaos that continued as darkness fell on Wednesday evening.

People carrying Trump campaign flags — some of them appearing to be armed — swarmed the Capitol complex. They broke into the building and draped a Trump flag over the Capitol balcony, disrupting the process of the vote certification and forcing members of Congress, journalists and other officials to take cover or flee the building. Shots could be heard at one point. Mr. Pence was whisked to a secure location, as were other lawmakers. 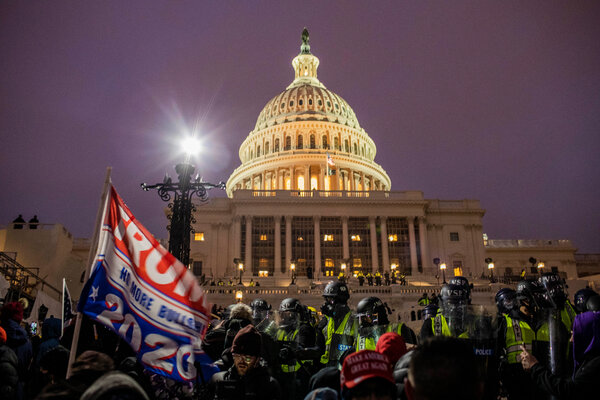 Mr. Trump monitored the scene as it unfolded on television, according to administration officials and people close to the White House. He holed up in the Oval Office, speaking with Mark Meadows, the White House chief of staff, who was said to have been rattled by the day, and Pat A. Cipollone, the White House counsel.

Donald Trump Jr. posted a tweet urging supporters to stop the violence. Ivanka Trump, a White House adviser, denounced the violence and corrected an initial tweet in which her reference to “patriots” made her intention unclear. There was silence from the first lady, Melania Trump, and Mr. Trump’s son Eric tweeted about how many people sang to him for his birthday at the rally.

Two of the president’s former chiefs of staff criticized the mob. His former counselor, Kellyanne Conway, said on ABC News that the mob was made of “extremists.” His former communications director, Alyssa Farah, urged him publicly to say something.

But the president resisted repeated requests from advisers, some made directly to him, others to Mr. Meadows and other aides.

Mr. Trump initially rebuffed requests to mobilize the National Guard, according to a person with knowledge of the events. It required intervention from Mr. Cipollone, among other officials, according to the person. About 1,750 National Guard troops from the District of Columbia and Virginia were to deploy Wednesday night, a National Guard spokesman said.

As allies of the president began to go public with their disgust about what was taking place at the Capitol and urged him to speak out, White House aides finally coaxed Mr. Trump into a tweet in which he did not condemn the violence.

Then they convinced him he needed to say something in a video statement, which Mr. Trump opened with another declaration that the election was “stolen” from him and his supporters, before he said “go home,” ending with words to the supporters: “I love you.” Facebook removed that video, and Twitter later did as well.

Then he made clear that he viewed the day as an expression of his grievances. “These are the things and events that happen when a sacred landslide election victory is so unceremoniously & viciously stripped away from great patriots who have been badly & unfairly treated for so long,” Mr. Trump wrote on Twitter. “Go home with love & in peace. Remember this day forever!”

Mr. Trump’s ally, Senator Rand Paul of Kentucky, predicted as Congress prepared to reconvene Wednesday night that there would be no further objections from senators to the certification. But Mr. Trump told advisers he wanted to see the senators keep going with the fight.

Several White House advisers described themselves as alternately disgusted, scared or shocked by what had taken place. And the work of government continued on around Mr. Trump, seemingly without his participation.

The defense secretary and the chairman of the Joint Chiefs of Staff conferred with Mr. Pence, not Mr. Trump, about sending support to reel in the riots. The national security adviser, Robert O’Brien, condemned the “mob” and praised Mr. Pence.

Several Democrats, meanwhile, called for Mr. Trump’s impeachment. Others — including some Trump administration officials — privately speculated about whether the 25th Amendment would be invoked to remove him from office with just two weeks left in his term.

Trudeau addressed his blackface controversy for a second time. Here’s what he said