The administration has raced to build the president’s promised border wall and block migrants from entering the United States, but the future of those policies will be determined by the election. 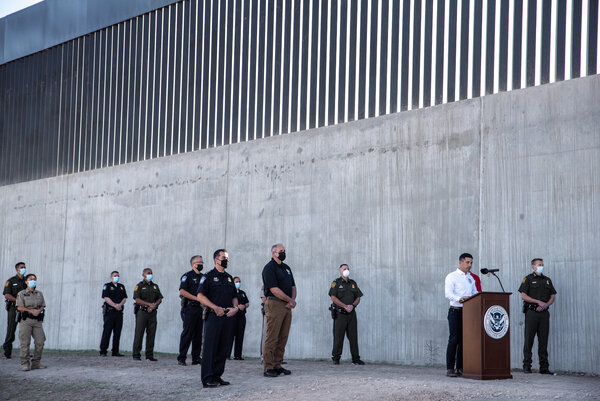 McALLEN, Texas — The leadership of the Department of Homeland Security gathered on Thursday under the shadow of 30-foot, black-painted, steel bollards to promote the near completion of 400 miles of President Trump’s border wall.

The politics of the moment, five days before the election, was lost on no one.

“The only reason we haven’t reached another crisis is because of the policies and procedures this administration put into place over the last several years, including the construction of an effective border wall system,” Chad F. Wolf, the acting homeland security secretary, told reporters, photographers and cameramen. “Abolishing these measures or reversing course is absolutely no way forward.”

Immigration has not been a central theme of the race between Mr. Trump and former Vice President Joseph R. Biden Jr., the Democratic nominee, but the future of some of the president’s hard-line policies at the border will be determined by the results.

The Homeland Security Department has been racing to deliver on Mr. Trump’s promise of 450 miles of border wall before the end of the year. The agency is still about a week away from the 400-mile marker, according to Customs and Border Protection officials, and nearly all of the construction has been in areas where dilapidated fencing or vehicle barriers already stood.

But the steel structure on the border, built without congressional approval, is something of a monument to the president’s determination. It has affected the environment, private property owners and, Homeland Security officials say, the job of border agents.

Department leaders in recent days have traversed the nation, including in battleground states, to emphasize routine arrests by Immigration and Customs Enforcement, criticize Democrats and blast so-called sanctuary city policies. The agency has also erected billboards in Pennsylvania to warn of the dangers posed by undocumented immigrants.

All of that has amplified criticism that the department has become an arm of the Trump campaign.

“There are partisan politics behind it, not operational reasons,” said David Lapan, a former spokesman for the Homeland Security and Defense Departments under Mr. Trump. “Over the time of the Trump administration, D.H.S. has been seen as more and more politicized.”

The nonprofit government watchdog American Oversight requested that the Homeland Security Department’s inspector general investigate whether the senior leadership had violated the Hatch Act, which prohibits federal employees from engaging in political activities on the job. 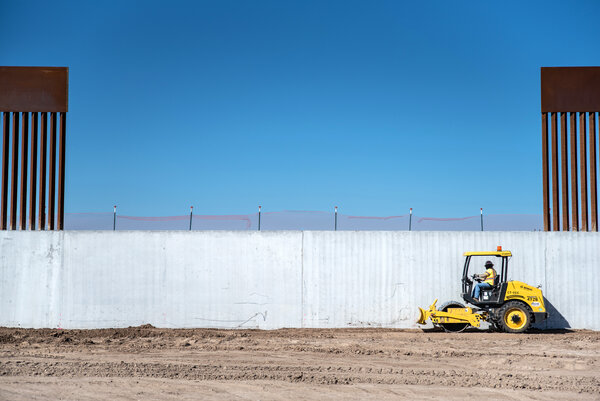 Standing in front of a line of Border Patrol agents, Mr. Wolf dismissed the criticism and defended policies that have effectively halted migration across the southwest border, leaving families in squalid tent camps in some of the most dangerous areas in Mexico.

The Homeland Security officials also attacked the policy proposals of Mr. Biden, who has pledged to immediately halt wall construction and end the Remain in Mexico program that has forced tens of thousands of migrants to wait in Mexico for court hearings on asylum claims.