DES MOINES — President Trump has spent his 21 months in office labeling his critics as unpatriotic.

N.F.L. players who kneel during the national anthem possibly “shouldn’t be in the country,” he has said. Journalists who write unflattering stories are “enemies of the people.” Democratic lawmakers who did not clap for his State of the Union address were “treasonous.”

And yet, for Bridget Carberry Montgomery, a Democrat in Iowa, this is a time when she has never felt more patriotic.

Ms. Montgomery, a 43-year-old mother of four, had never gotten involved in politics before this fall, when she led a group that met Sunday nights at a sports bar, with children in tow, to write postcards urging Iowans to turn out to vote.

“I love my country and I want it to be the very best version of itself,” she said. She added, “I feel emboldened in my patriotism.”

As the nation goes to the polls in what is widely seen as a referendum on the president’s conduct, policies and character, both his supporters and his opponents are expressing sharply contrasting views on issues like immigration, guns and the courts.

But increasingly they differ on something more fundamental: what it means to be patriotic and how to express that politically.

Here in the middle of the country, where three of Iowa’s four House races are competitive, and where Mr. Trump first rewrote the rules of patriotism by attacking a war hero and ex-P.O.W., Senator John McCain, it is clear that Republicans and Democrats part ways over the meaning of duty, respect and love of country.

For Republicans and Mr. Trump, who was joined for his final rallies by the singer Lee Greenwood, who performed his anthem “God Bless the USA,” patriotism in politics often means conspicuous displays of respect for the traditional expressions of America — the flag, the military, the Pledge of Allegiance. 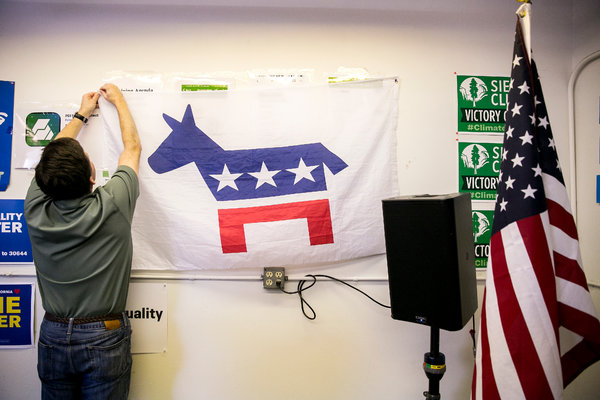 Denise Bubeck, a Republican in Grimes, Iowa, works for an advocacy group that promotes “family values” such as heterosexual marriage and opposition to abortion.

For her, standing to show respect for the flag is nonnegotiable. When she sees athletes kneeling in protest of police brutality during the anthem, she thinks of a grandfather who was killed in the battle of Iwo Jima. “People actually shed blood for the freedoms we have,” she said. “We need to show respect for this country.”

But, particularly in this election season, many Democrats described their vote as a different form of patriotism, an urgent effort to protect and reclaim American democracy. That view tries to redefine a subject Democrats in the past have often ceded, politically, to Republicans.

Democrats see a president who has sought to use the Justice Department against his political enemies, to undo constitutional protections including freedom of speech and birthright citizenship, and who has dangerous authoritarian tendencies.

They are furious at the Republican majorities in Congress for not exercising their responsibility to hold Mr. Trump accountable.

Democrats “are rallying around a rhetoric of ‘you’ve got to go out and do this to save the country’ — that voting is going to be a patriotic act, that there are norms being violated and institutions corrupted,” said Kevin M. Kruse, a historian at Princeton University.

Some conservative intellectuals think Democrats’ efforts to seize a patriotic mantle is fundamentally flawed. They argue that progressive politics is built on grievances about racism, sexism and other alleged sins of America.

Support for President Trump can be explained in part as a patriotic backlash to the left’s ongoing critique of America, said Shelby Steele, a senior fellow at the Hoover Institution at Stanford University.

“Trump is president today because the left got drunk on its sanctimony, on its moral superiority, and actually put down these people, and in many cases quite unfairly,” Mr. Steele said.

“And so the explosive support for this guy from nowhere is those people who felt overlooked and excluded from this new vision of America, this new liberal innocence. They want to be — they believe — that they’re really proud Americans, and their patriotism is built on American self-esteem.”

A defining moment this campaign season was when Beto O’Rourke, the Democratic Senate candidate in Texas, responded to a question about N.F.L. players who kneel during the national anthem to protest police killings of blacks.

“I can think of nothing more American,” Mr. O’Rourke said of the protests, in a speech that went viral.

Democrats and Republicans are divided over the acceptability of dissent as a component of patriotism.

She invoked the definition of patriotism written by James Baldwin: “I love America more than any other country in the world and, exactly for this reason, I insist on the right to criticize her perpetually.”

Ms. Anderson, who works for a financial company, said her vote for the Democratic challenger in a tight race in Iowa’s Third Congressional District was a vote to flip the House majority, and put a check on the president.

“I think anyone who’s paying any attention should be worried about democracy,” she said.

She said her own family was directly threatened. As a lesbian, she said the constitutional protection of her marriage felt vulnerable with Mr. Trump’s Supreme Court picks. Her spouse, a Latina immigrant, has a green card. “But with this administration’s antagonism toward immigrants, especially those of Latino descent, and in a homosexual partnership — I can’t trust this administration to honor precedents or laws,” Ms. Anderson said.

Like nearly everything in the Trump era, Americans’ divisions over patriotism have become more partisan, polls suggest.

Gallup, which since 2001 has asked people how proud they are as Americans, found this year that 74 percent of Republicans are extremely proud, but since Mr. Trump’s election, the share of Democrats who are extremely proud to be American has plummeted to 32 percent.

A YouGov survey this year found majorities of Democrats said a person can be patriotic who criticizes American leaders to foreigners, disobeys a law believed to be immoral or refuses to serve in a war believed unjust. Far fewer Republicans agreed that such dissents were compatible with patriotism.

Brian Myers, a Republican small business owner in Madrid, Iowa, who did not vote for Mr. Trump (he wrote in Bobby Jindal, the former governor of Louisiana), said he was troubled by polls showing a drop in Democrats’ pride in America.

“So often now I see people characterize the American flag as an offensive item,” he said. “‘It’s a symbol of racism and bigotry.’ I just find that appalling.”

Tyler Higgs, 32, a school psychologist who lives in Clive, Iowa, rejected the conservative critique that as a progressive he hates America. Mr. Higgs founded a local chapter of Indivisible, a grass-roots network on the left.

“Why are we knocking on doors, why are we going to legislative forums and writing letters to our legislators if we hate our country?” he said. “All these things they say are liberal outrage — that’s patriotism.”

Mr. Higgs called the midterms “insanely important,” listing ways he thought Mr. Trump was a threat to democracy: undermining the electoral process, attacking the independent press and “stoking white supremacists in our society.”

Many Republicans view this fear as overblown, even paranoid. Senator Charles E. Grassley, Iowa’s senior Republican, said Democrats should relax, and that the Constitution’s separation of powers remains intact. He recalled his first election to the House in 1974, shortly after Richard Nixon resigned, when there was wild talk about a military coup. But the Republic survived.

“As long as you’ve got the Constitution’s checks and balances, what these Democrats are saying about the threat from Trump has no basis,” Mr. Grassley said.

Republicans for years owned the upper hand on patriotism as a political issue. The advantage dated at least to the Vietnam era, when some on the left equated the flag and the military with shameful symbols of American power.

In the 1980s, Republicans mastered using the flag as a wedge issue in the culture wars. They later attacked President Barack Obama for going on what they called an “apology tour” of foreign countries and an insufficient embrace of “American exceptionalism.”

This year, however, with American prestige in the world suffering under Mr. Trump, Democrats have seen an opportunity and sought to rewrite the patriotism script. They nominated a slew of military veterans in Republican-held House districts. Many are women with tours of combat or the service academies on their résumés. The candidates include Amy McGrath in Kentucky, Mikie Sherrill in New Jersey and Elaine Luria in Virginia. Abigail Spanberger, running in Virginia, is a former C.I.A. antiterrorism officer.

Jean Ludwig, 75, a retired financial adviser, has been knocking on doors for Republican candidates in Carroll, Iowa, including for Gov. Kim Reynolds and Representative Steve King.

“I wish there was more I could do,” she said.

In her view, a factual assessment of the Trump presidency would conclude that he has done an excellent job, but Democrats, who “are more controlled by emotions,” she said, have been unwilling to see it. “They don’t talk to anybody, just to each other: ‘I hate the president, don’t you?”

She said she particularly dislikes the news media telling her what to think rather than, in her view, reporting things straight. When Mr. Trump called himself a “nationalist,” much of the coverage was critical because of the historical association of the term with white supremacy; Ms. Ludwig called that media bias.

“Nationalism is a perfectly fine thing. It just means we’re going to look out for the United States first,” she said.

Not far from Ms. Ludwig’s home county, Emily Alberhasky hears something much more sinister in the president calling himself a nationalist. For her, it is the opposite of patriotism.

“He is giving voice and power to the racist underbelly of this country,” said Ms. Alberhasky, 40, a mother of five from Ankeny, Iowa. “When President Trump speaks about the caravan or any of the hundreds of thousands trying to get asylum or find safety in our country, and he speaks about them the way we have heard other groups, including Jews, be talked about in history, it gives me chills to the bone.”

“The association with the word nationalism is not one of democracy and acceptance,” she said. “It has a very heavy tone of judgment and supremacy to it.”

She said the Trump administration has caused her fear and sleepless nights.

“Am I proud to be an American?” she said. “I don’t think I can say I am right now. I feel really disappointed in close to half of this country. I feel embarrassed and ashamed that this is our current situation.”

She added: “But I’m really proud of more than half of our country and I feel very patriotic that I want this country to get back to, or maybe self-actualize up to, a place of being who we truly are, which is a very diverse, very eclectic, beautiful mix of all kinds of people.”

Ms. Alberhasky had never been involved with politics before this year. She spent the days leading to Tuesday working 12-hour shifts in a campaign office, mobilizing volunteers to get out votes for Democrats.

Dr. William J. Barber II, the North Carolina pastor and champion of liberal causes who lead protests known as Moral Mondays at the State Capitol, said the idea of eternally seeking to improve America is enshrined in some of the nation’s most patriotic texts.

He cited “America, the Beautiful” and its lyrics: “America! America! God mend thine every flaw.”

Lawmaker aims to get citizenship question removed from U.S. census